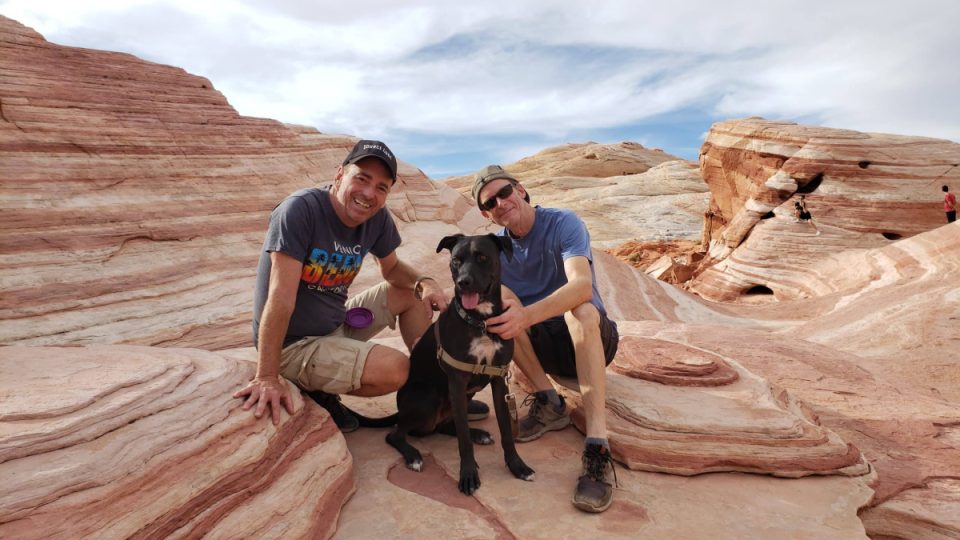 When California resident Mark Loar adopted a rescue dog named Bud in 2020, he had no idea the pooch would turn out to be a hero. He just wanted to surprise his husband, Glenn Searle, with the dog who charmed him while volunteering at Best Friends Animal Society’s Lifesaving Center in Los Angeles.

“I spent some time with Bud and he was so loving,” Loar told The Dog People. “I said, ‘Can you give me a kiss?’ and he gave me a kiss. He just kind of melted my heart.”

Bud came home on February 29, 2020, for a “trial run” that lasted less than 24 hours—the couple adopted him the very next day.

The Labrador Retriever mix was around 4 years old when Loar and Searle adopted him. He’d been an owner surrender to a city shelter when Best Friends pulled him into their program. He was adopted three weeks later but returned within a couple days because he would try to escape when left alone—likely due to lack of exercise.

That wasn’t an issue with Loar and Searle, who are avid hikers and have had dogs throughout their lives. The three enjoy hiking together whenever possible. Thanks to training at Best Friends, Bud knew how to sit, shake, and walk nicely on leash. He was also fastidious about doing his business outside.

He fit in seamlessly to the couple’s home in Venice, California, where they’ve lived for 19 years. He loves leaning in for cuddles and flipping onto his back with his paws in the air.

Bud is also a loyal, alert dog—which proved lifesaving on the night of Sunday, October 2, 2022. The couple was in bed and getting ready to go to sleep when Bud got up and went to the window, fixated. It seemed unusual to Searle because it wasn’t uncommon to hear noise coming from the house that was being built right across the street. “We hear a lot of commotion,” he said.

Searle remembers thinking, “Well, if it’s interesting enough for you to go look, I’ll go look, too.” He got out of bed and went to the window, where he realized Bud was looking down at a fire. He immediately called 911—the first person to do so. 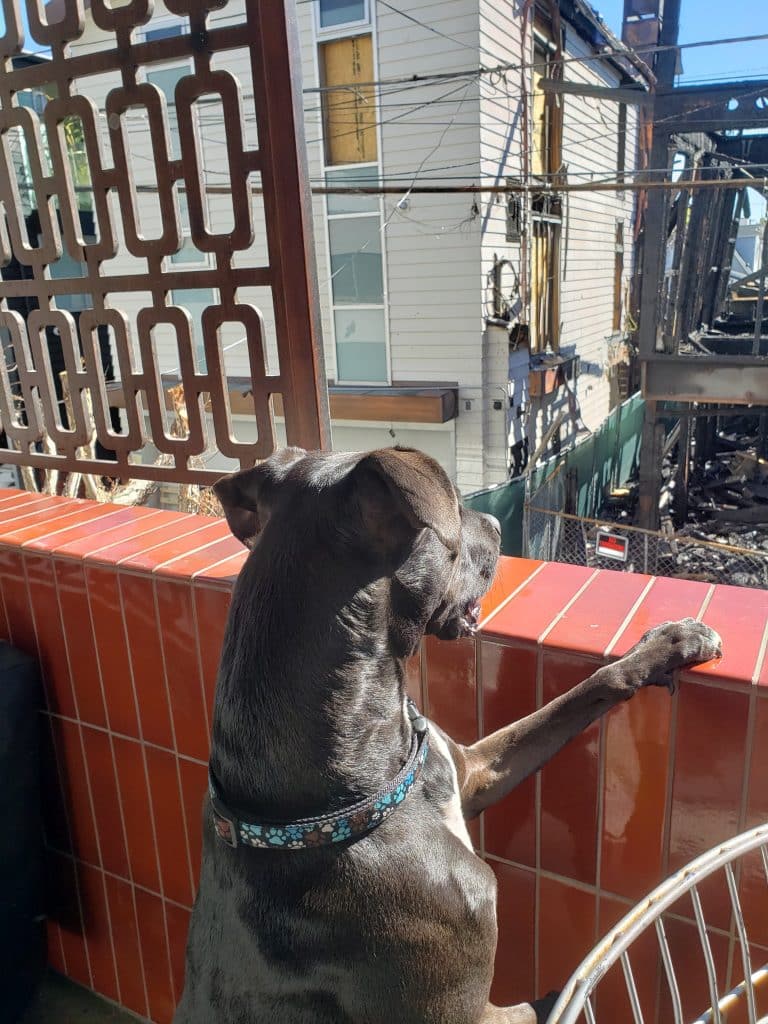 Bud surveys the damage done to a neighbor’s home during the Venice Canals fire that destroyed multiple homes on October 2, 2022. Photo courtesy of Mark Loar and Glenn Searle

“In the minute and a half it took for me to get to the fire dispatcher, it went from a very small, controlled fire to a very large fire, which I believe was probably because of an accelerant like gasoline,” he said. “It moved very quickly. While I was on the phone with 911, I opened the window and screamed, ‘Fire!’ at the top of my lungs. After doing that for a few seconds, other people got out of their homes and they started screaming ‘Fire!’ So they were taking care of waking up the neighbors on each side of the house at that point.”

Once 911 took the call, he ran up to the roof and turned on the hose to try to save their house, but within a minute or two he was overwhelmed by the heat.

“It went up to 1200 degrees in just a few minutes,” he said. “The steel on the house next door bent. It was just a tinderbox.”

The couple grabbed Bud and ran into the street with their neighbors, waiting for help to arrive. Ultimately over 100 firefighters battled the blaze, which destroyed three homes and damaged two.

“Our windows blew out. Our house was about to go up, but they got there in time to cool ours down and stop it,” he said. “We were right on the edge. It was terribly frightening.”

It was also emotional spending time with neighbors as they watched their homes burn. Even the dogs seemed to sense the somber mood.

“Bud and other neighbors’ dogs have never gotten along very well. But that night they were all just sitting quietly side by side on the sidewalk,” he recalled. “Something distressing was going on and they were just so well behaved. It was amazing.”

Thankfully, no one was killed or injured. And now the neighbors call Bud the “Venice Canal Superhero Dog.”

“It’s a big fuss when they see him,” Searle said of his neighbors, who gave Bud a thank you gift bag of food and toys. 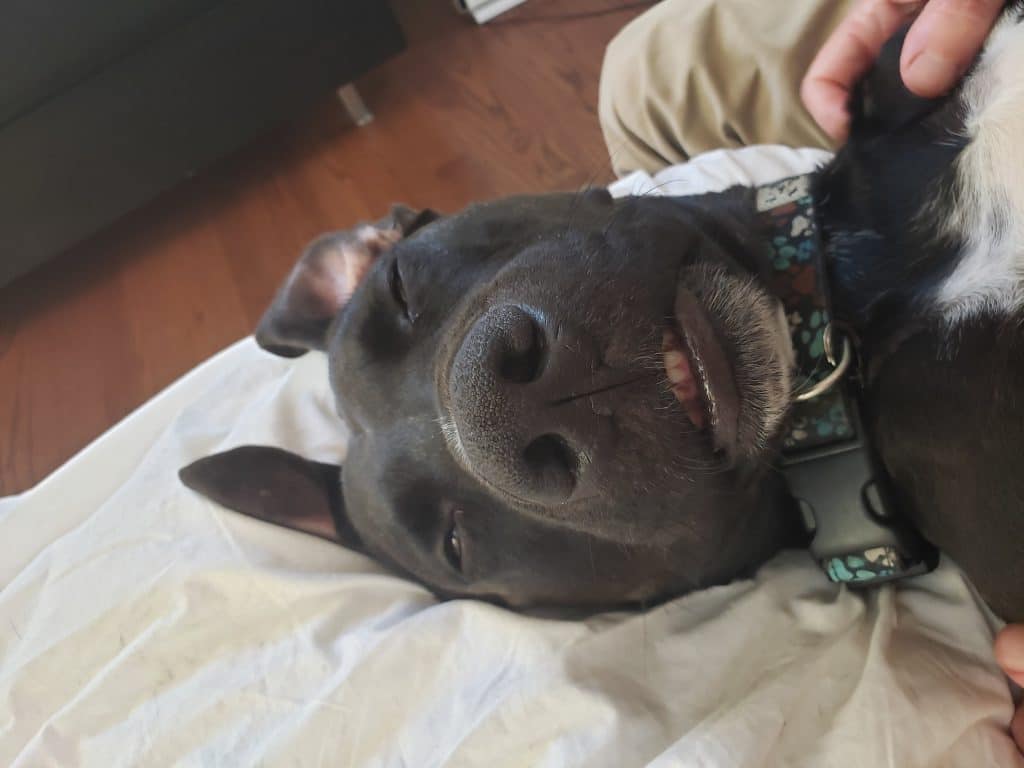 The Power of Rescue

Brittany Thorn, executive director at Best Friends Los Angeles, said she’s not surprised that Bud turned out to be a loyal companion and ultimately, a hero.

“Bud’s previous adopters has informed us that he loved his people,” she told The Dog People. “He was also very attentive to his handlers on walks. He would stay by their side and ‘check in’ by making eye contact often. He was—and still is—a very good boy.”

Rescuing a dog has many known benefits, such as being exercise buddies, providing companionship, and lowering stress, Thorn noted.

“However, we never know how a dog could ultimately change—or save—a life,” she said. “In Bud’s case, as in many other adoptions, we never could have imagined such an incredible benefit.”

Like Bud was a hero for his dads, you can be a hero too, by adopting from your local shelter or rescue.

Through the end of the year, Embrace Pet Insurance is covering adoption fees for dogs and cats adopted from Best Friends Lifesaving Centers across the country as well as Best Friends Animal Sanctuary in Kanab, Utah.

Thorn emphasized that there are many potential pet superheroes waiting for adoption at Best Friends Los Angeles and at shelters throughout America—about 100,000 more than this time last year.

“The pandemic has had unimaginable consequences, which has led to loss of housing, staffing shortages, and employee burnout—all of which affects pets and people across our nation,” she said.

“On any given day, more than 950 dogs and cats are killed in shelters simply because they don’t have safe places to call home. Every day, animals’ lives are at risk—and like Bud was a hero for his dads, you can be a hero too, by adopting from your local shelter or rescue.” 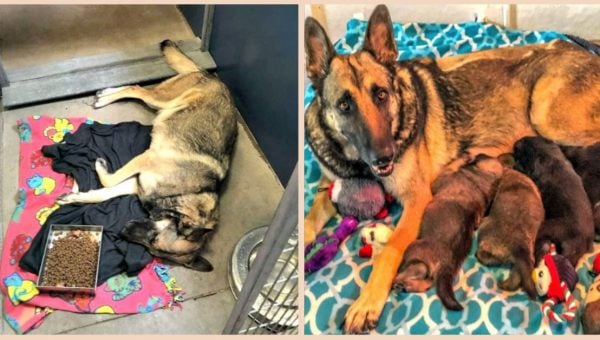 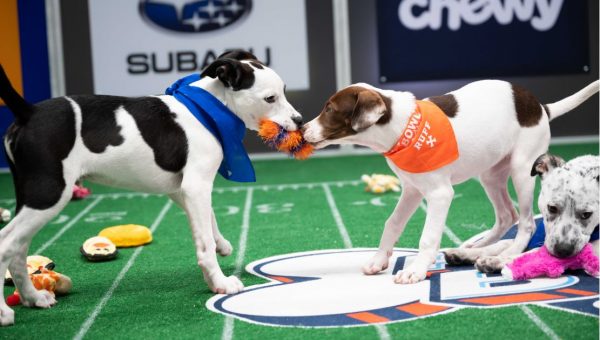 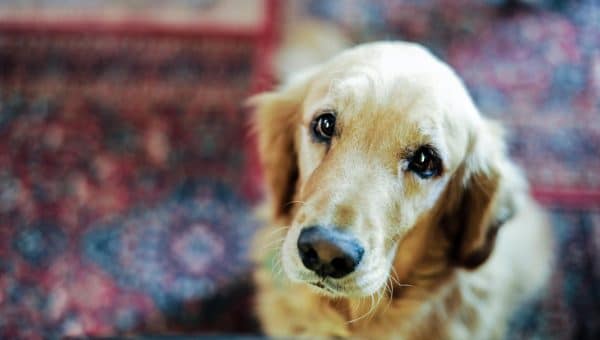