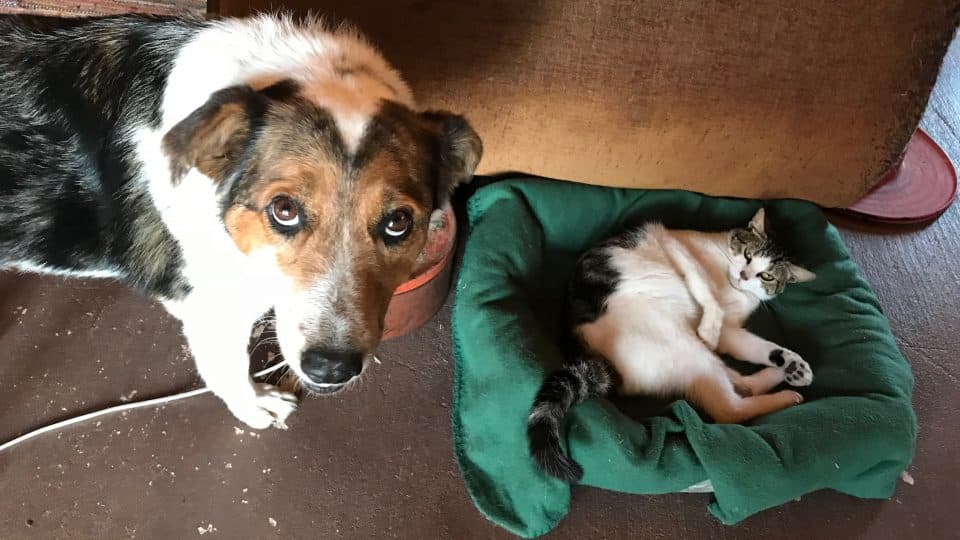 To say that Sally Mann Romano has led an exciting life would be an understatement. During the 60s, she was heavily involved in the San Francisco rock n’ roll scene. She’s been photographed by some of the world’s top rock photographers and was previously married to Spencer Dryden, the drummer for Jefferson Airplane.

Now a semi-retired attorney and author, she lives on a ranch in Huntsville, Texas that she calls Rockit Ranch, after her second husband’s band, Doctor Rockit. The property serves as a sanctuary for all her rescued animals: five dogs, six cats, three horses, and one donkey.

Romano has felt called to rescue animals since she was a young girl. “I was particularly keen on bringing home every stray dog that I found in our neighborhood, much to the chagrin of my father. Owning and caring for animals is just second nature to me,” Romano explained. 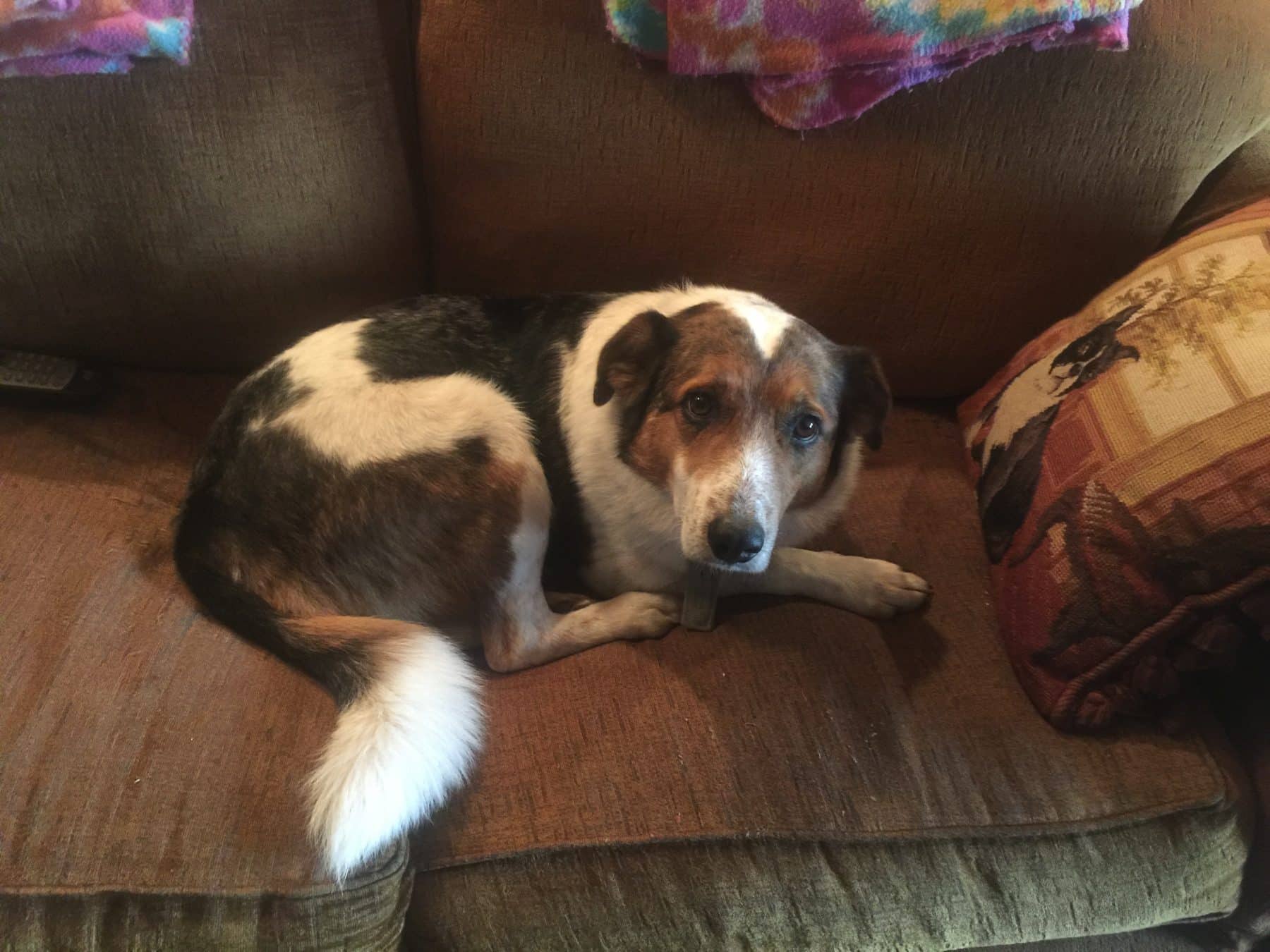 Shortly after moving to Huntsville with her animals, she spotted a lone dog down by the lake that adjoins her property. The dog returned every morning for a week.

“Eventually, he came up to the pasture close to the house, and probably prodded by hunger, came up onto the porch one day,” Romano recounted. She fed the dog who then returned for food over the next couple days.

Before long Romano brought him inside and introduced the dog to her other dogs and cats. He was a sweet dog who soon became part of the family. She decided to call him Trip. What she didn’t know was that Trip had a secret.

More Than Just A Bum Leg

About a year after Trip came into her life, Romano noticed that he would occasionally bend his left front leg and drag his paw. She didn’t think too much of it at first, but Trip soon developed an abrasion from dragging his foot. Romano immediately brought him to the vet and was shocked by what she discovered.

“X-rays revealed a bullet lodged under Trip’s right armpit which was impinging nerves that ran to the left leg,” she explained.

There was no way to know how Trip got shot, but without treatment, he likely would’ve become lame over time. “I’m sure he would have fallen prey to coyotes or other predators,” Romano said. “I’m very grateful he made it here and that I could help him.”

A Chance for Trip

After careful consideration, the vet and Romano decided that amputation was best. Romano was scared and worried about Trip’s recovery. “The folks at the veterinary clinic were just fantastic—I was in much worse shape than he was,” she laughed.

Trip stayed at the clinic for almost two weeks and Romano visited him regularly. It was a very expensive procedure and hospital stay, but Romano was able to raise money through a CareCredit loan, a generous donor, and GoFundMe donations. “Somehow we made it,” she said.

Trip did great post-surgery. “He was hopping around on three legs before long, and he just made a marvelous comeback,” she said with admiration. “I don’t think he has any idea that he used to have four legs!” 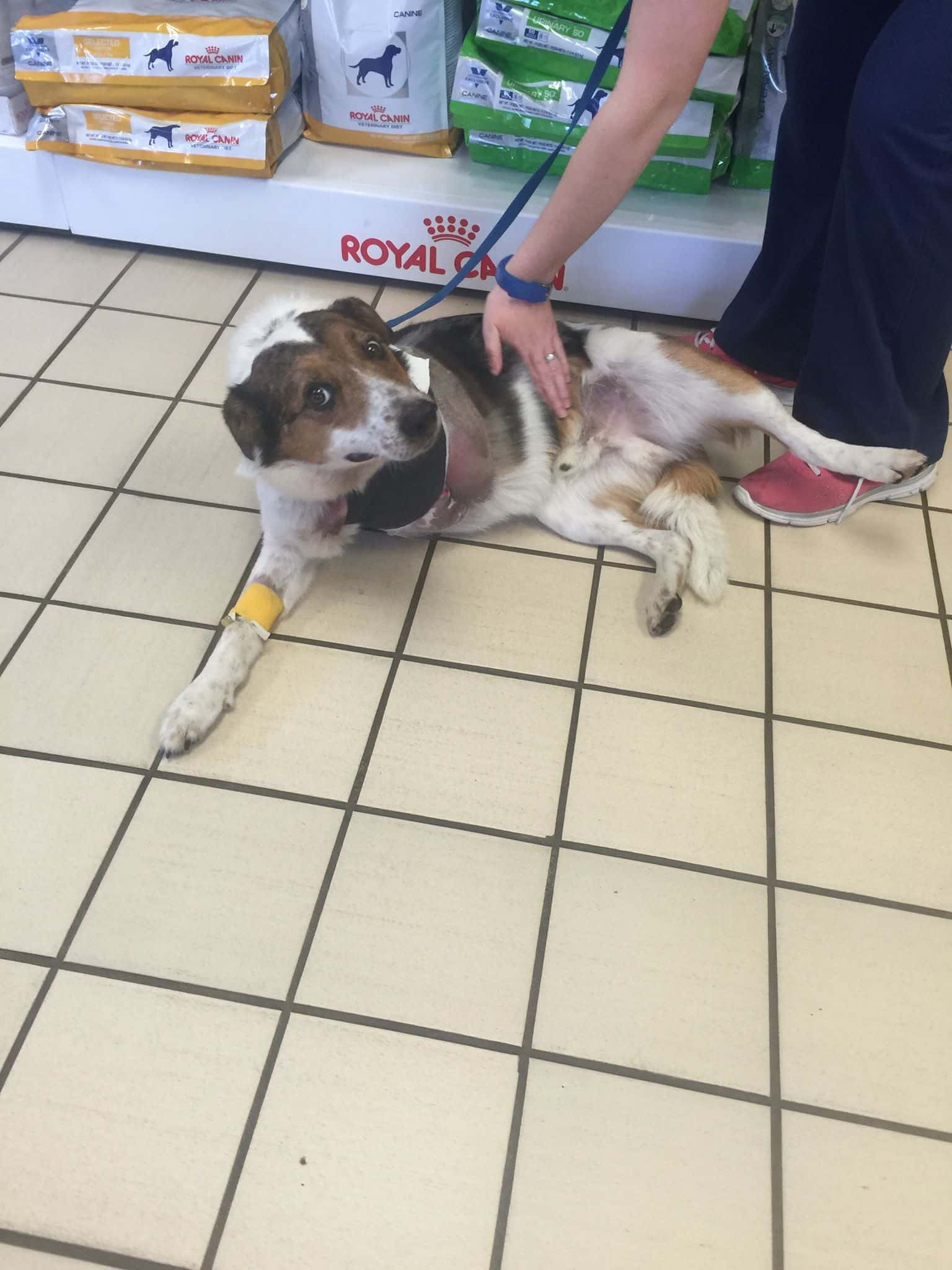 As Trip recovered, he became increasingly sensitive to Romano’s moods. “He seems to know if I’m upset or worried and wants to be as comforting as possible—it’s very endearing,” she explained.

“I can’t imagine life without him; he’s an integral part of my family and a friend to all of the other dogs. He adores them, and they adore him. He’s even taken to the most recent rescue kitty and has really come a long way since the surgery. I feel like, not counting me, he is the leader of the doggie pack. He and the other dogs love to play together—he’s just a super doggo!” 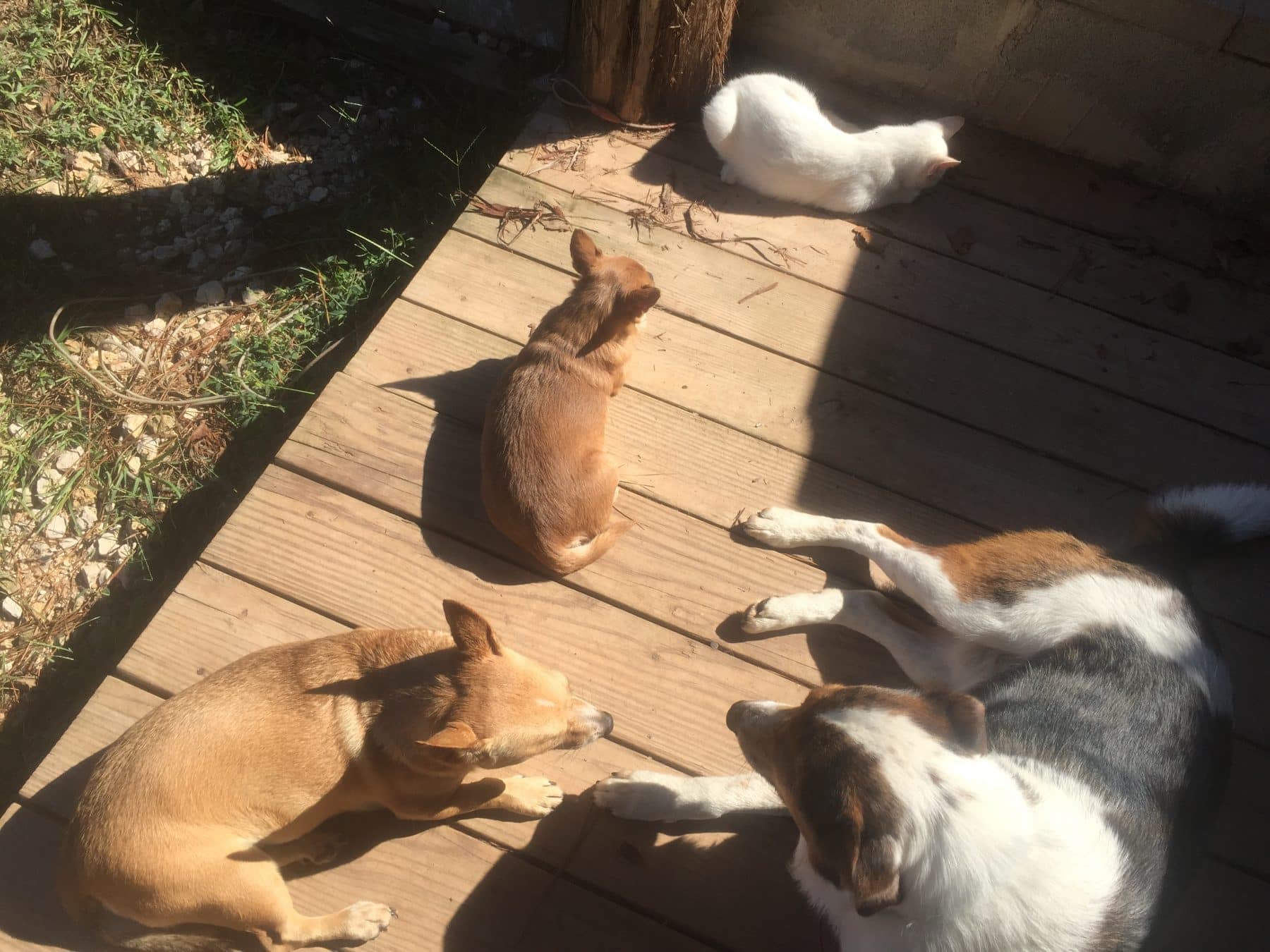 And when it comes to rescuing animals, Romano urges people to “Do it today!”

“I’m so enriched by sharing my life with these precious dogs, cats, horses, and, yes, even the stubborn little donkey,” Romano said. “It can’t be described, and even with all of the financial anxiety associated with trying to do it on my Social Security retirement money and the kindness of strangers, I would not trade a single day…Whatever the cost, the value is so much greater.” 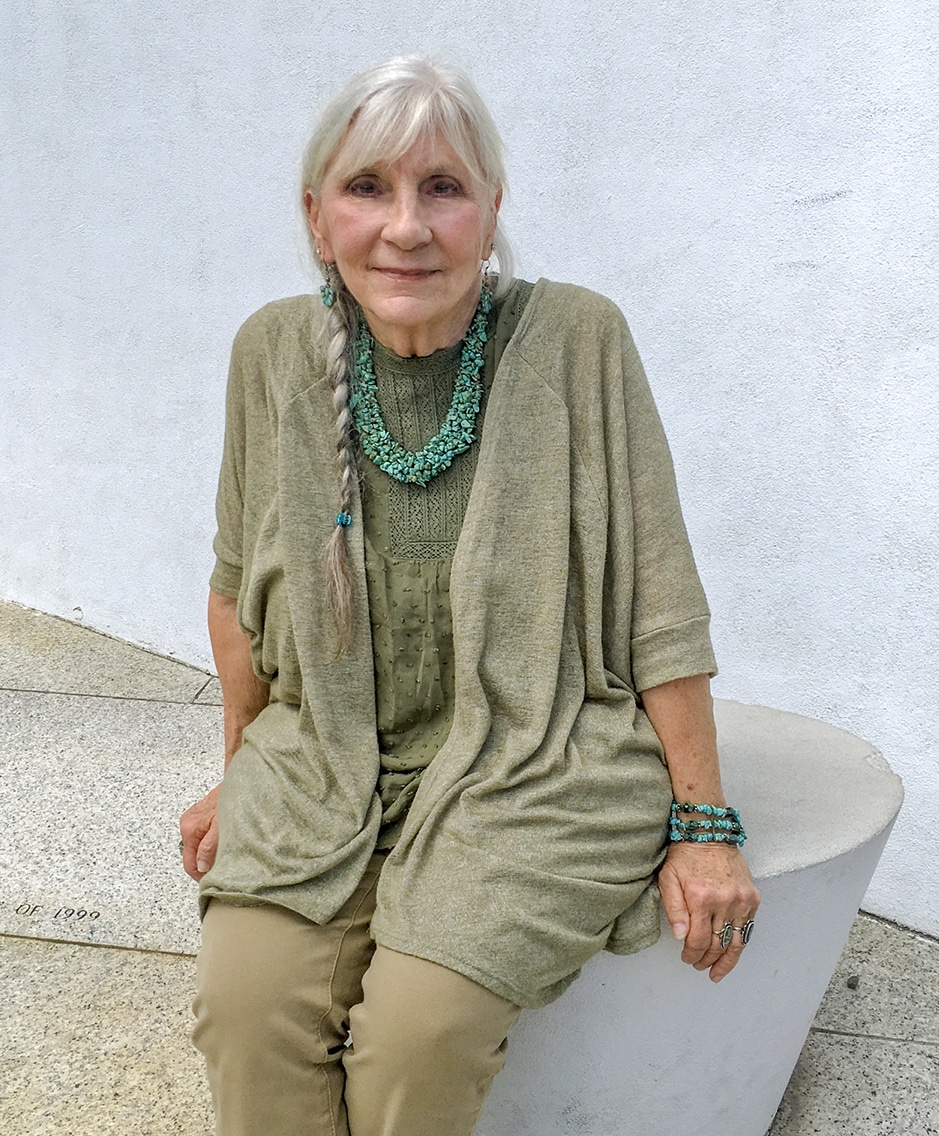 Romano’s recent book, “The Band’s With Me” is a memoir of her life in the music business working for and traveling with everyone from Frank Zappa to The Band. The book’s foreword was written by rock singer, Grace Slick, and includes photographs by some of the top photographers in rock and roll. You can buy the book here.

She hopes to look into 501(c) (3) status later this year. In the meantime, she accepts donations through various GoFundMe campaigns. Funds help with medicine for the animals, vet care, dog and cat food, and hay and grain. You can help by contributing through Squeezer’s GoFundMe page.