As Hurricane Sandy was fast approaching New Jersey in 2012, the state was bracing for what would be the second-costliest disaster since Hurricane Katrina. Volunteers at a small no-kill animal shelter (now defunct) in East Orange, N.J., worked frantically and tirelessly to evacuate the animals out of the building and into foster care before the devastating floods and loss of electricity.

Among the dogs needing immediate refuge was a cute beagle/dachshund/terrier mix, who would later be named Sandy. She’d just been saved from a high-kill shelter in South Carolina. Slated for euthanization, volunteers there pleaded her case for transport to the no-kill shelter up North. 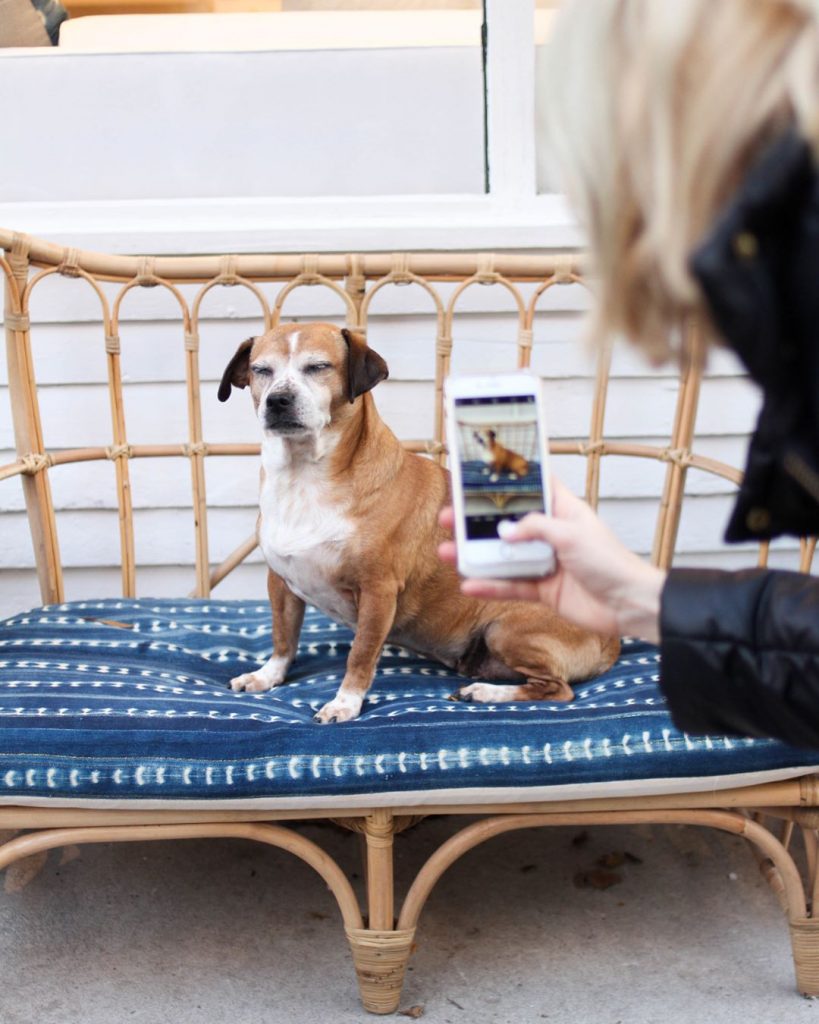 The dog was a physical mess and nowhere near ready for adoption. She was underweight, infested with fleas and had what appeared to be a big, infected cut on her back. But time was of the essence and getting the animals to safety was a priority. Little did anyone know that the hurricane would turn out to be the catalyst for the adoption of this once physically broken dog who would end up in a home with Liz Dee, co-president of Smarties Candy Company, one of the most iconic candies since 1949. 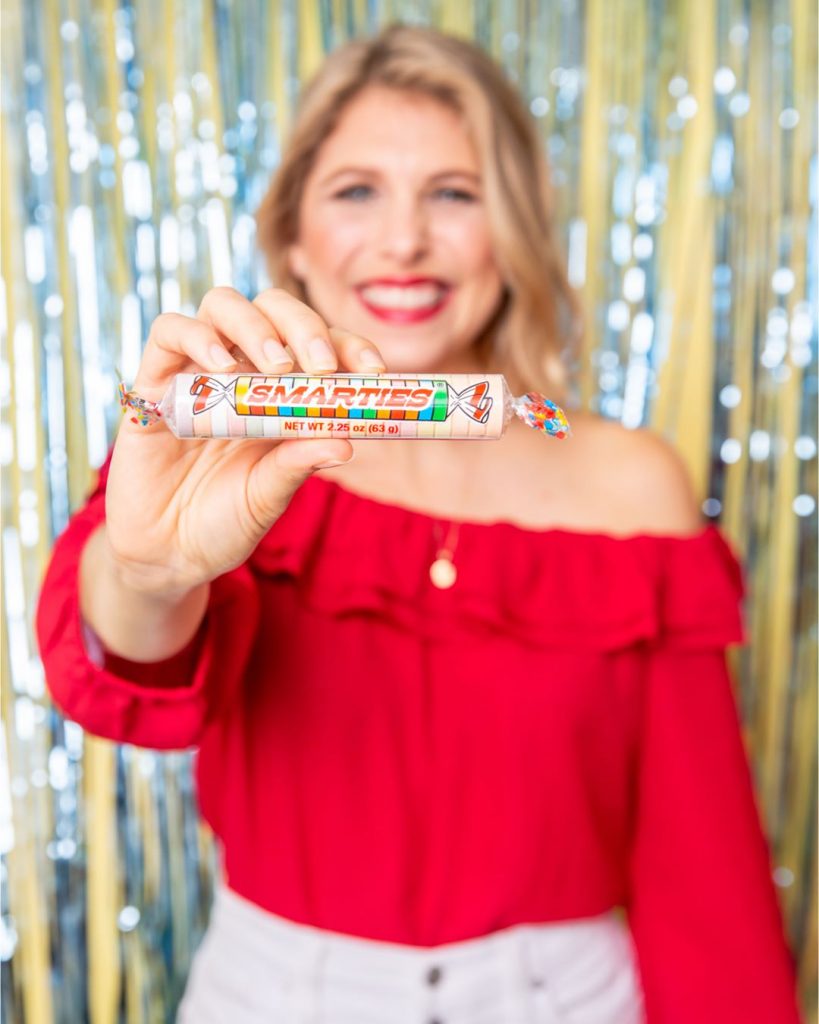 Hurricane Sandy and Sandy the Dog

Dee was a volunteer at the shelter where she walked and helped to socialize dogs. She and husband Nick Garin stepped up to take in the dog from down South. “We fostered her with the cut on her back and didn’t realize she had fleas and didn’t know for sure she was not spayed,” said Dee, who said they lost power for about 10 days. 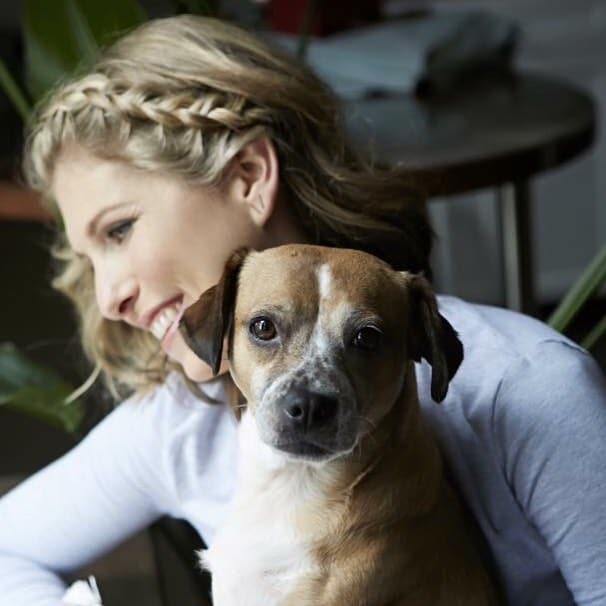 Because two trees fell on their house that first night, Dee, Garin and their new foster dog slept downstairs on an air mattress. Since there was no power, they couldn’t see the fleas and Sandy went into heat. “We couldn’t go anywhere so I was fashioning diapers out of whatever I got my hands on,” Dee said.

During the entire ordeal, Sandy the dog “was this perfect, loving sweet dog and not concerned about the hurricane but so happy to be with humans.” Although it was an emergency response to foster the dog, Dee and Garin fell in love with her and having her during the hurricane sealed the deal to adopt. “Everything that could go wrong did go wrong, but it was perfect because she was perfect.” 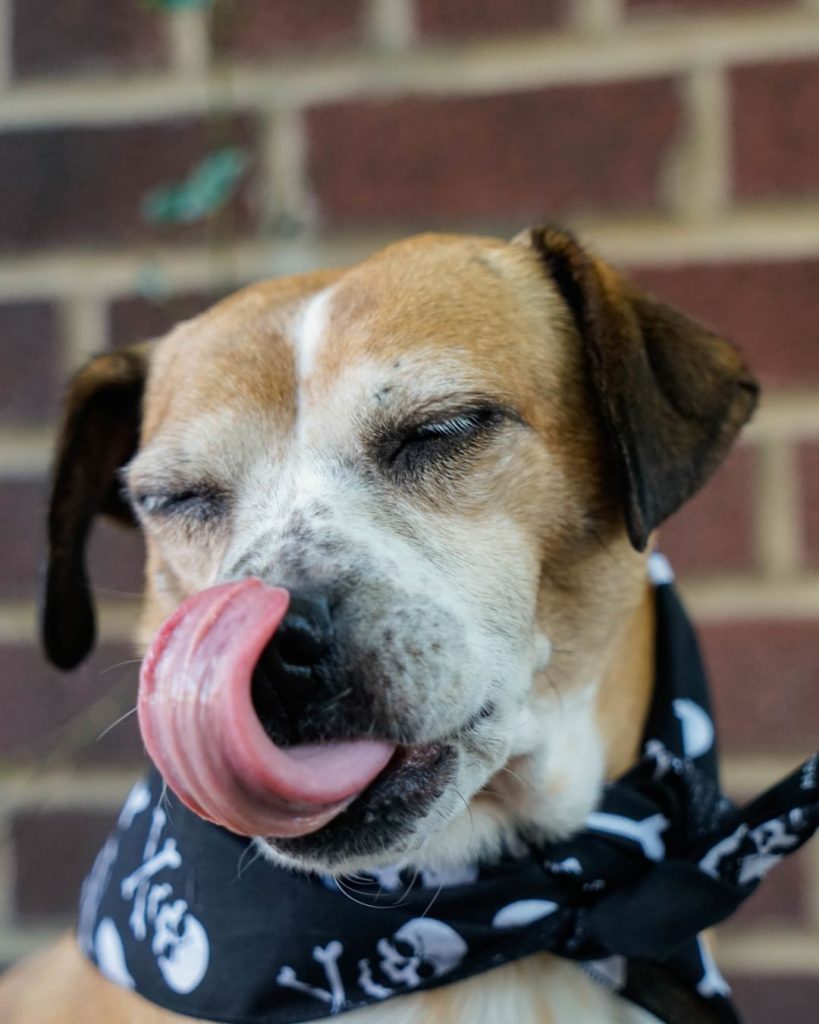 A Dog and her Smarties Family

Dee not only grew up with family dogs, but she also grew up with candy – and lots of it. Her grandfather Edward Dee came to the United States in 1949 from England and was a third-generation candy maker (every child’s dream!). Since he had candy-making knowledge he decided to start a candy company in the states, and that company later became Smarties, now based in Union, N.J. (Note that Smarties in the U.S. are not the same as outside the States.)

“At 94, he still comes into the office every day,” Dee said of her grandfather. “He’s a real entrepreneur, a visionary and amazing man who passed along the company to two of his sons who were leaders in business for many decades.” In 2017, Sarah Dee (Dee’s cousin), Jessica Dee Sawyer (Dee’s sister) and Dee took over leadership as co-presidents. 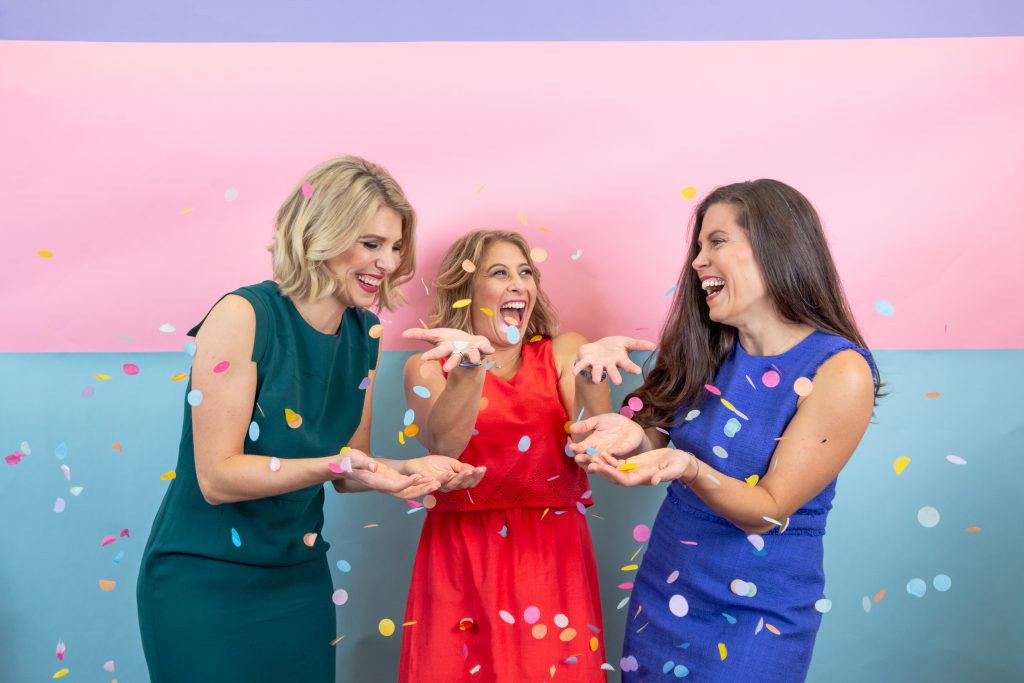 Although a favorite and go-to-choice around Halloween for decades and throughout the year, it’s not simply a nostalgic penny candy. “It’s relevant to today’s consumers because it clicks so many boxes of modern needs,” Dee said. “They are fat-free, gluten-free, peanut-free, dairy-free, vegetarian and vegan – free of all the top allergens.” It makes it easy to bring to classrooms and hand out to trick-or-treaters as consumers don’t have to worry about food sensitivities. Each of Smarties’ New Jersey and Newmarket, Ontario factories makes more than a billion candy rolls per year. The company runs around the clock 24-hours a day, 5.5 days a week.

Dee said it’s an interesting and fun industry to be in, and having Sandy the dog be a part of spreading the word makes it even better.

Dates Nights Are Better with a Dog

As the first dog that Dee and Garin have had as adults and together as a couple, Sandy, who is around 10 years old, truly has made a positive impact. “It’s cliched but true, every day when she comes to the door and wags her tail and greets me, I thank my lucky stars that I have her in my life,” Dee said. “She lifts my spirits, she understands when I’m down, she celebrates with me when I’m happy.” 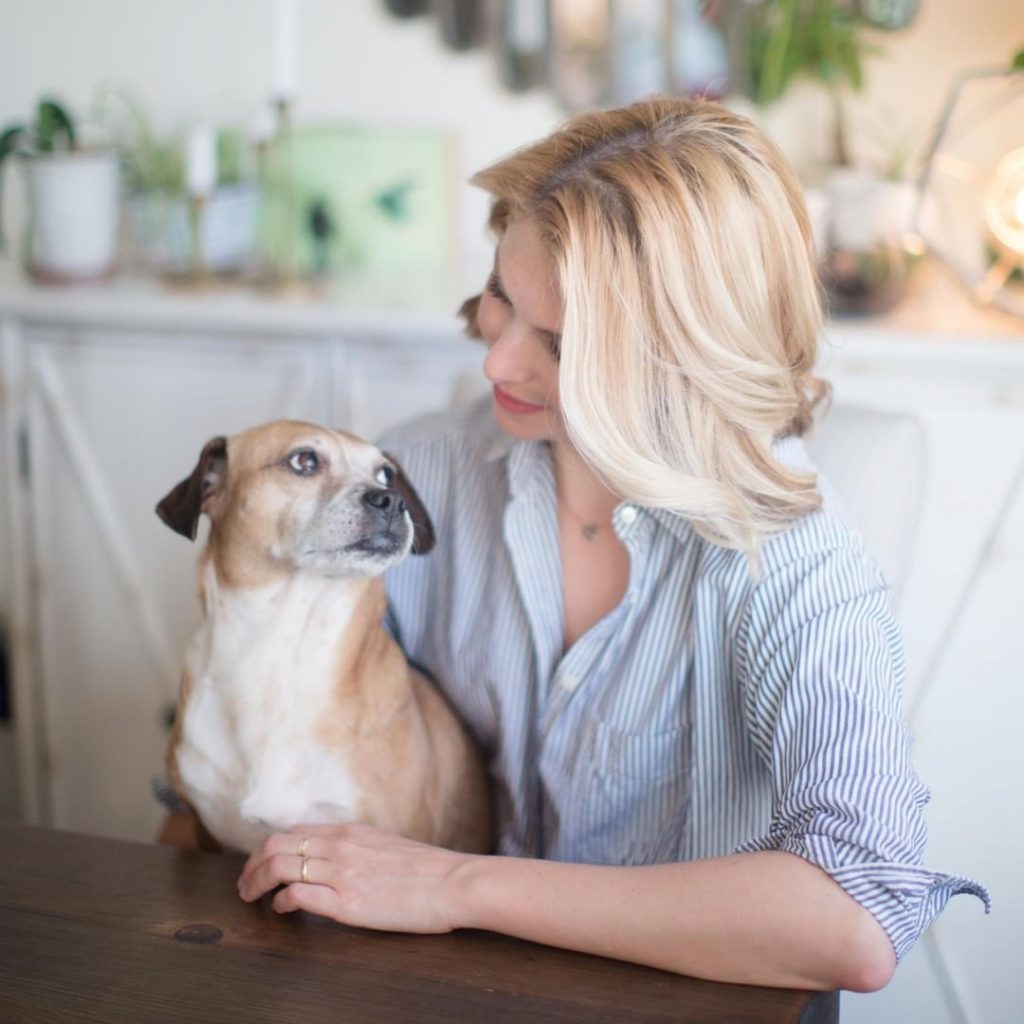 Sandy has proved to be a wonderful companion aside from the practical benefits of going on many walks a day, which Dee enjoys. She is a “blessing in our life,” Dee said. “People who meet her say they feel their blood pressure dropping.”

With her stressful job and because life can be challenging, Sandy is her “de-stress secret.” Just sitting on the couch with a novel and a cup of tea is even better when Sandy jumps on the couch to accompany her. 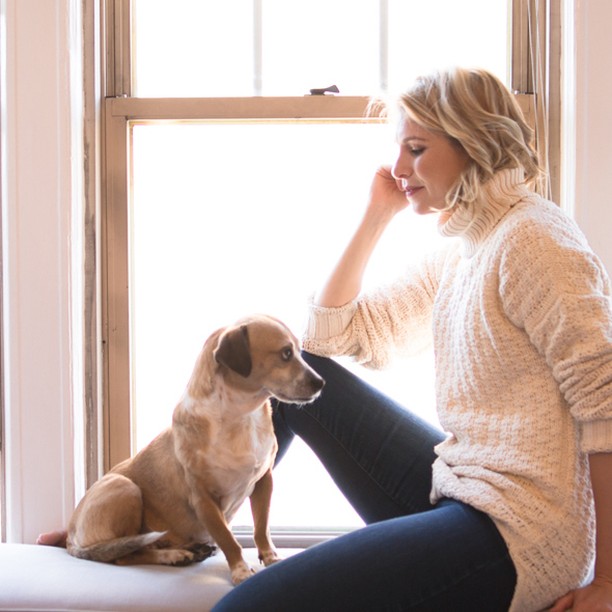 And as date nights are important for all couples, before Sandy came along, Dee and Garin would go out to the movies. “But now we can’t justify going to the movies knowing that when we stay home and watch a movie we can cuddle with Sandy at the same time,” Dee said. “It’s hard to leave her. There’s very little that is better than hanging out with Sandy.”

Sandy is known on Instagram as SandyPawsPup and uses her platform on social media to champion the causes surrounding rescue dogs and animal rights. She is an advocate for Adopt Don’t Shop, as it saved her own life, along with the issues of overpopulation in shelters. “She takes the position that rescue is the best breed,” Dee said. “So, her platform is educational, plus she also has a huge heart for all her fellow animals. Her voice has a unique perspective as it comes from a dog’s perspective, which resonates with people.” 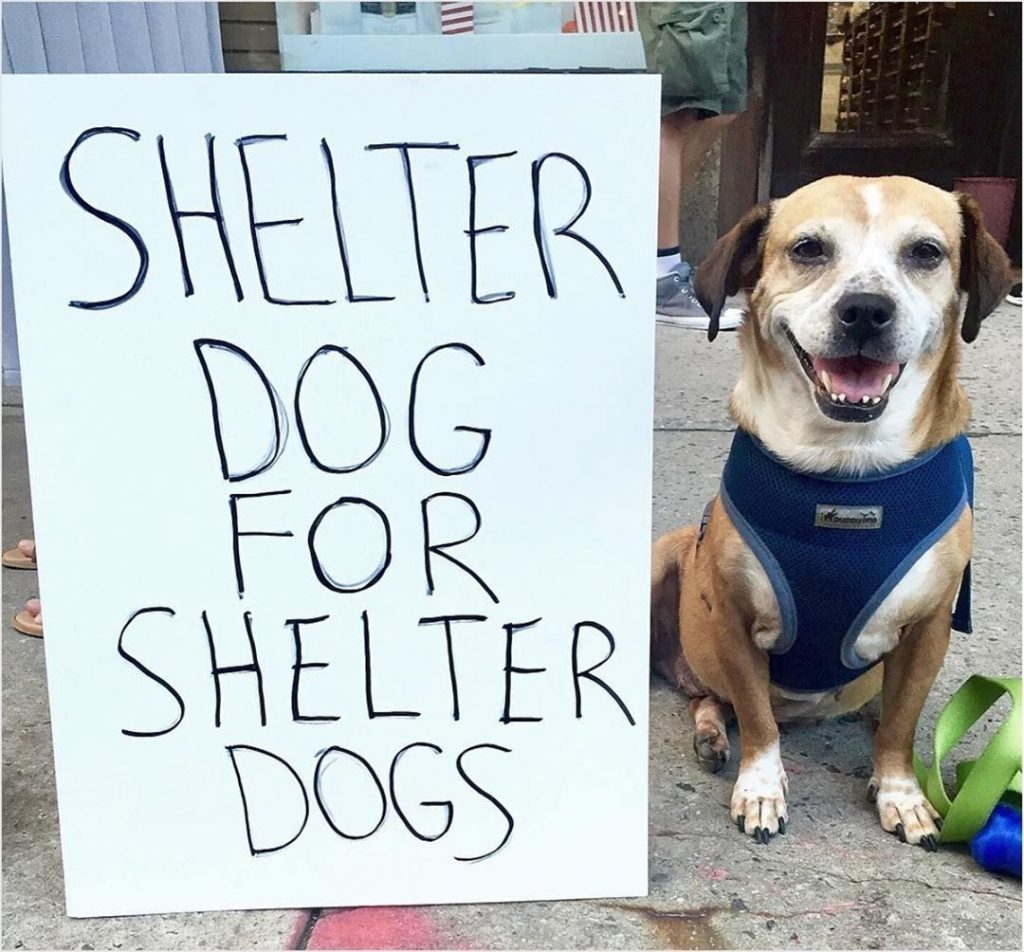 While she advocates for her fellow dogs, she also likes to pitch Smarties. “She can’t have Smarties and she has no taste for human candy,” Dee said. “But she does a great job modeling with the candy. What’s better than dogs with candy?” Smarties also features other rescue dogs to show the importance of how amazing they are. 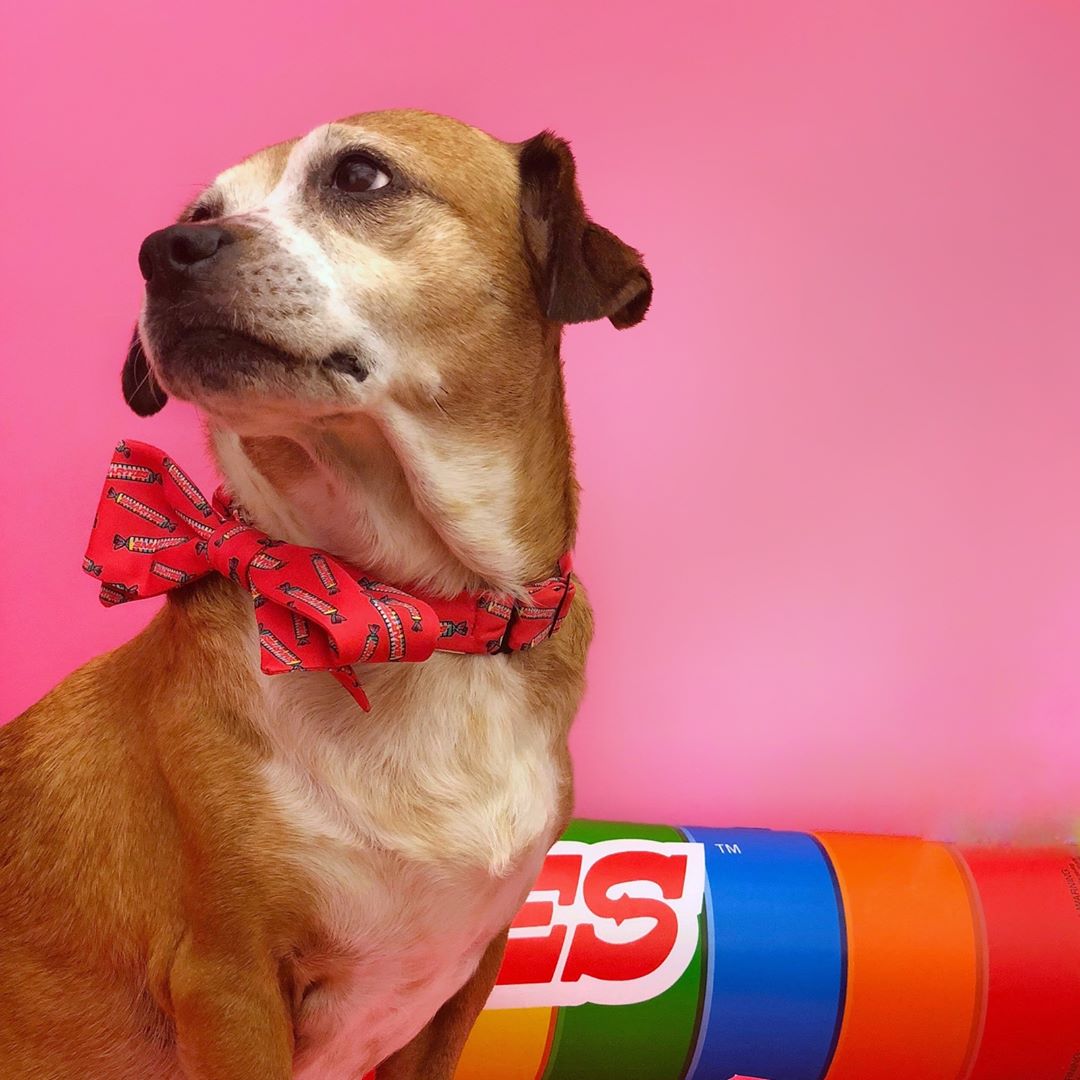 Even though Sandy is pretty chill and loves to hang out and relax, if there’s one thing that gets her going is a good, old-fashioned siren. “She howls at sirens and people go crazy,” Dee said. People will take out their cameras and start videotaping. Spoiler alert: When the family is home in New York City, they all howl together. “We’re like a little wolf pack,” Dee said. 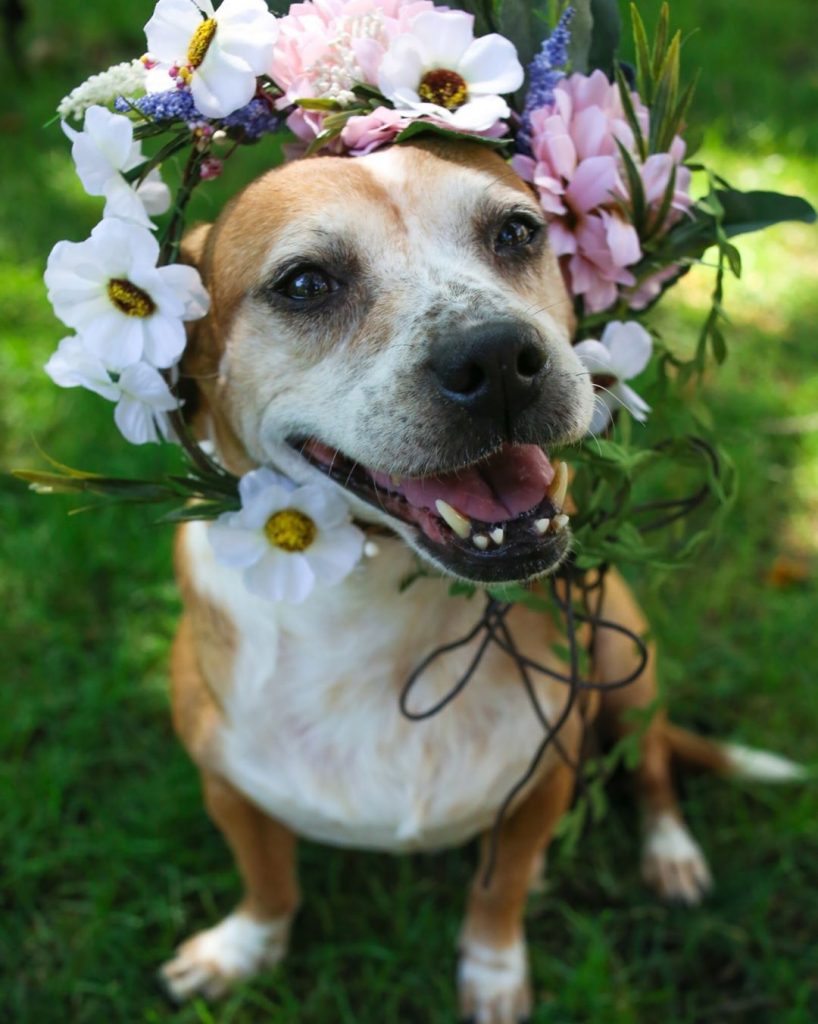 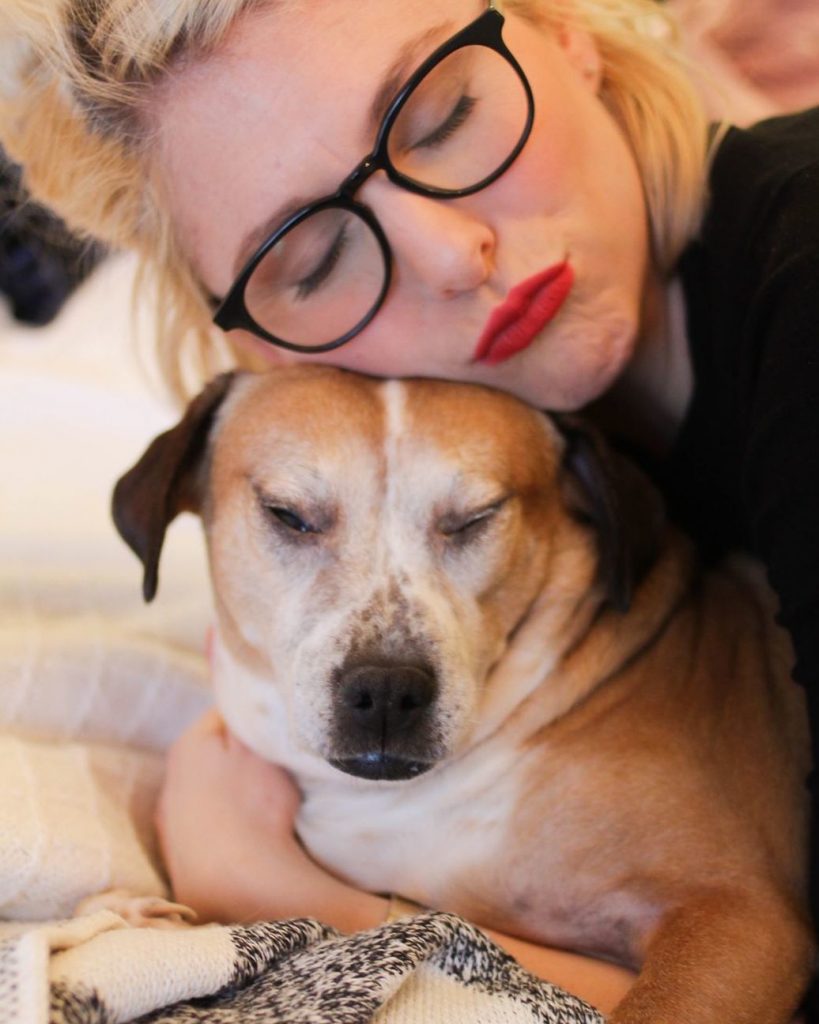 It seems like fate stepped in that day when Sandy was put on that transport van and sent up north to New Jersey, and it is not lost on Dee. “I am most grateful for Sandy’s love,” she said. “She’s a devoted companion and in many ways, I don’t feel anyone could possibly deserve the amount of love she gives, but I will gratefully accept it.”