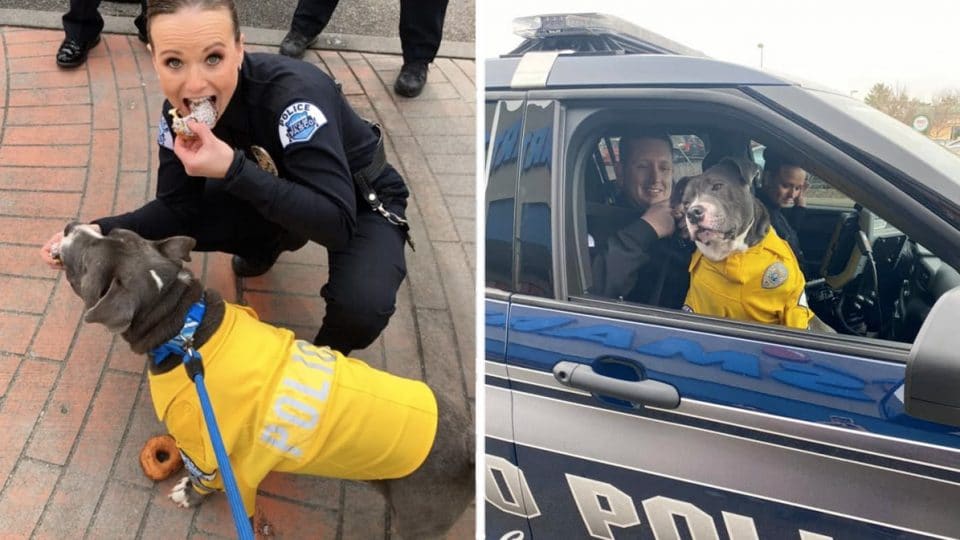 From the streets to our hearts. A very good boy named Eddie Spaghetti skipped police academy and was sworn in as a police K-9 officer for a day of adventures and treats thanks to his wonderful foster mom, rescue team, and the good folks of the Pasco, Washington police department.

Decked out in a snappy yellow uniform adorned with police patches, this extraordinary pooch was officially unofficially sworn in — to the delight of the entire internet. Stories about Eddie’s big day have been on the news around the world in just days.

So, why the special treatment for Eddie? Well, this extra special dog deserves all the accolades he can get after a life on the run. The abandoned dog roamed the streets of Benton City, Washington, until Benton County animal control officer Carin Brown caught him in late November 2019.

Eddie was in bad shape and was thought to have been hit by a car. A vet visit determined that he has terminal cancer leaving him blind in one eye, with just six months to a year to live.

Terminally ill dog gets to cross off his bucket list and become a K-9 cop 😭 pic.twitter.com/47c36QGl8V

With such rough odds, Eddie was due for a run of luck. Brown and animal control contacted Mikey’s Chance Canine Rescue to help. Then Eddie found a great foster home for life with Brown’s friend Kristi Kesler who decided that Eddie, aka Eddie Spaghetti, needed a fun and memorable bucket list to celebrate his remaining days in a loving home.

While Kesler thought a ride in a police car would be a great bucket list item, she had no idea the Pasco PD would roll out the red carpet and make Eddie an honorary K-9 for the day.

During his adorable swearing-in ceremony, Eddie promised to detect drugs, arrest the bad guys, and lock em up!

An ADB (that’s an All Dog Bulletin for you non-police folks out there ) sent Eddie off for the ride of his life in a squad car to make some official K-9 stops.

The first was to a local auto body shop for a “service to pick up property.” Not only did Eddie leave with an excellent gift basket of toys, treats, and food, he also received a donation toward his vet bills.

Our first stop at Nolan’s Collision in Pasco! Thank you from everyone at Mikey’s Chance!

Probably the most important stop was the local doughnut shop because well… cops and doughnuts, right? Police detective Julie Lee showed Eddie how to take a bite out of crime, so to speak.

The day was filled with more stops, and Facebook Live videos captured it all, as everyone in town rallied around Eddie, opening their hearts with generous donations wherever he went. With his ruff (er, rough) life behind him, Eddie showed everyone tons of love and affection.

Eddie, his partners, and the managers at Kennewick Petsmart playing with all of their donations.

Many people in the small town have helped to make Eddie’s bucket list items come true, and there’s more on that list, including a ride on a firetruck, a Valentine’s day photoshoot, and a ride in a motorcycle sidecar! We can’t wait to see what Eddie gets up to next.

We may never know how Eddie Spaghetti wound up sick and alone on the streets, but we do know he got very lucky when Brown found him. The hope is that others will step up for dogs like Eddie, whose humans let him down when he needed them most. It’s what Eddie would want. We’re pretty sure he’d bet his badge on it.

Eddie leaving Petsmart in style. Thank you for your donations Petsmart of Kennewick!

You can find more fun pictures of Eddie’s K-9 day at Mickey’s Chance on Facebook. Definitely give them a follow to keep up with Eddie’s bucket list. 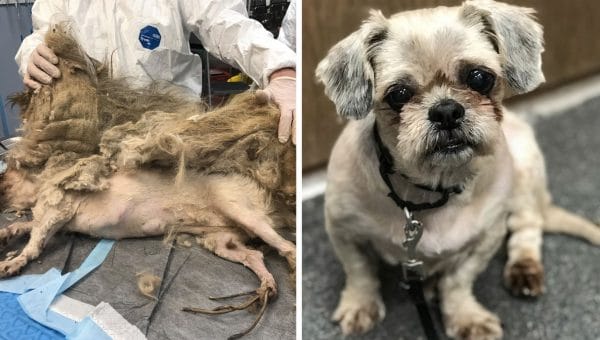