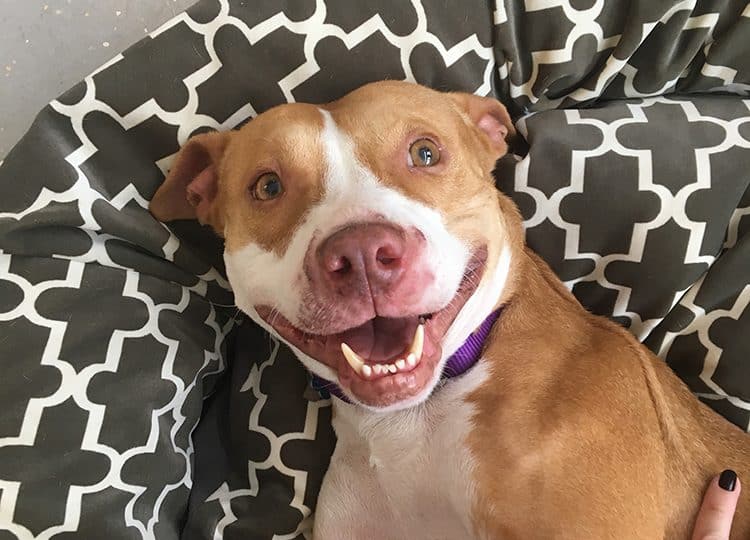 While on a family vacation in Mexico in 2017, Sophie Gamand wanted to help out with a local animal rescue. After finding Riviera Rescue, Gamand, an award-winning artist and animal advocate (see her story here), visited and met Matteo, who runs the rescue and dedicates his life to the neediest of dogs there.

She soon came upon a paralyzed dog named Frida and instantly fell in love. Frida needed human contact and rolled over for belly rubs while sporting an infectious smile that was pure joy. “I knew I couldn’t leave her behind and her intense gaze made me want to move mountains for her,” Gamand wrote in her book, Pit Bull Flower Power. 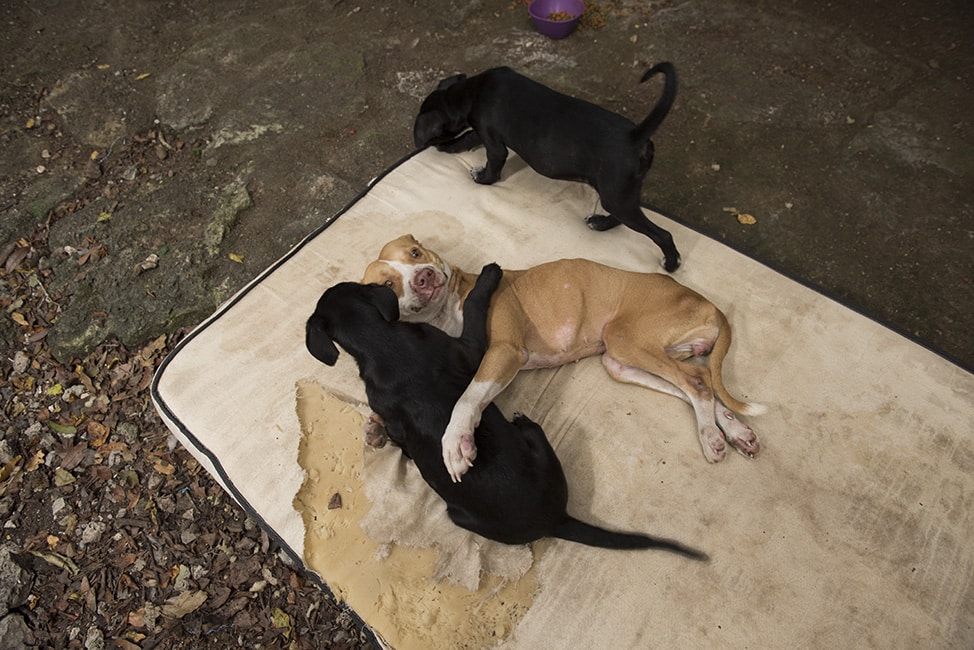 What Gamand didn’t know was that others would soon want to move mountains for Frida as well, and that Frida, in turn, would play an important part in the love story of a young couple in the States.

While no one knew how Frida became paralyzed, she eventually was surrendered by her owners and came into the care of Matteo, who nurses the “unadoptables” back to health. He then places them in homes locally or in the U.S. and Canada by way of his rescue partners, according to Gamand’s book.

In order to help Frida, Gamand reached out to Animal Haven in New York, an organization she has worked with since 2013, which stepped up to help. Matteo escorted Frida to New York, where she stayed at Animal Haven and began physical therapy at Water4Dogs. Weeks later, Gamand fostered Frida at her home in Brooklyn, a much less stressful situation where the dog soon became friends with MacLovin, Gamand’s dog. 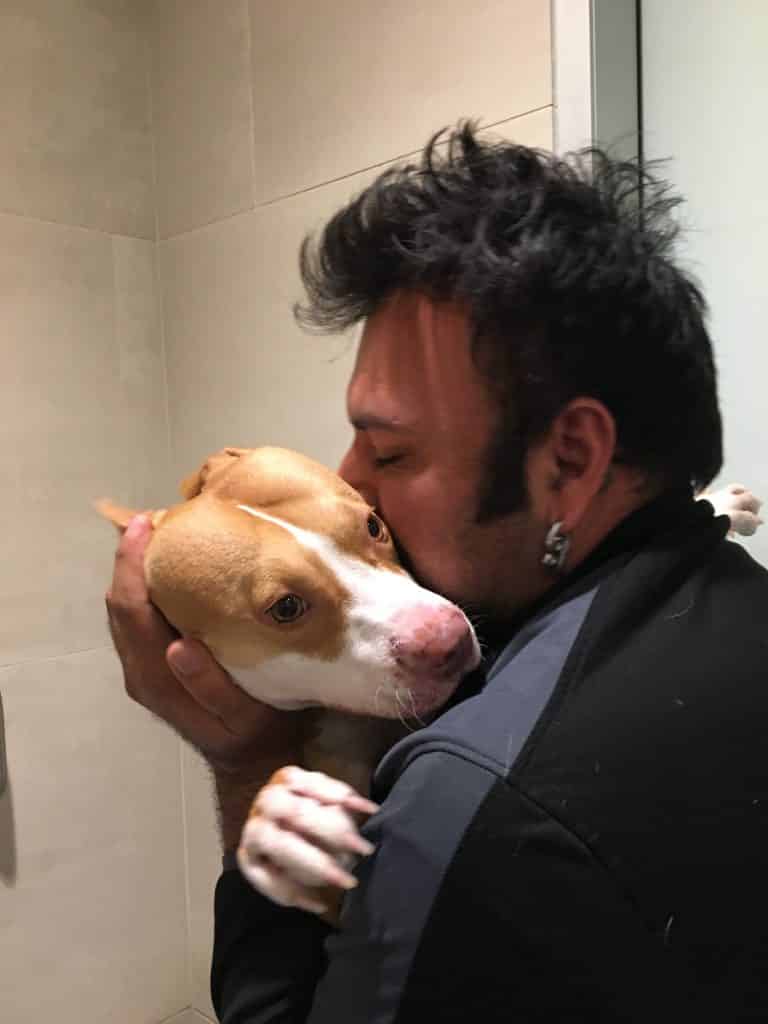 She took Frida around in a stroller and MacLovin often hitched a ride. And because she’d been posting Frida on her own Instagram account and included her in the Pit Bull Flower Power portraits, the dog became somewhat of a local celebrity.

The Road to Recovery

Frida didn’t like the hardwood floors in Gamand’s apartment, so Gamand made a “rainbow road” from children’s mats so it’d be easier for Frida to get around. Frida also hated being alone. “All she wanted was to be wherever we were,” Gamand writes.

“She’d lie at our feet and grab our legs with her paws; then, maintaining deep, loving eye contact, she’d slowly draw our feet in closer, hugging us with all her strength. It was fascinating to see her use her front legs to communicate, like human hands.” 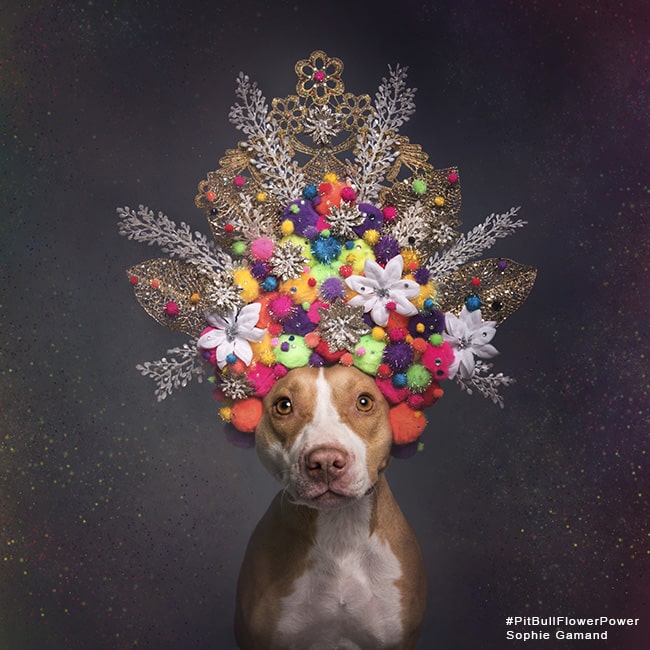 Although Frida was essentially paralyzed and had no use of her back legs, she wasn’t incontinent, which made it a bit easier in terms of caring for her. When her custom-made pink wheelchair (donated by Joey’s Paw) finally arrived, Gamand was ecstatic to see Frida run.

While Frida was progressing in her foster home in New York, Chelsea Fournier was falling in love with her from her home in Ohio.

Fournier, a certified dog trainer, had followed Frida’s story on Instagram since Mexico. “Gamand had been posting about a little red dog and I thought she was super cute,” Fournier said. 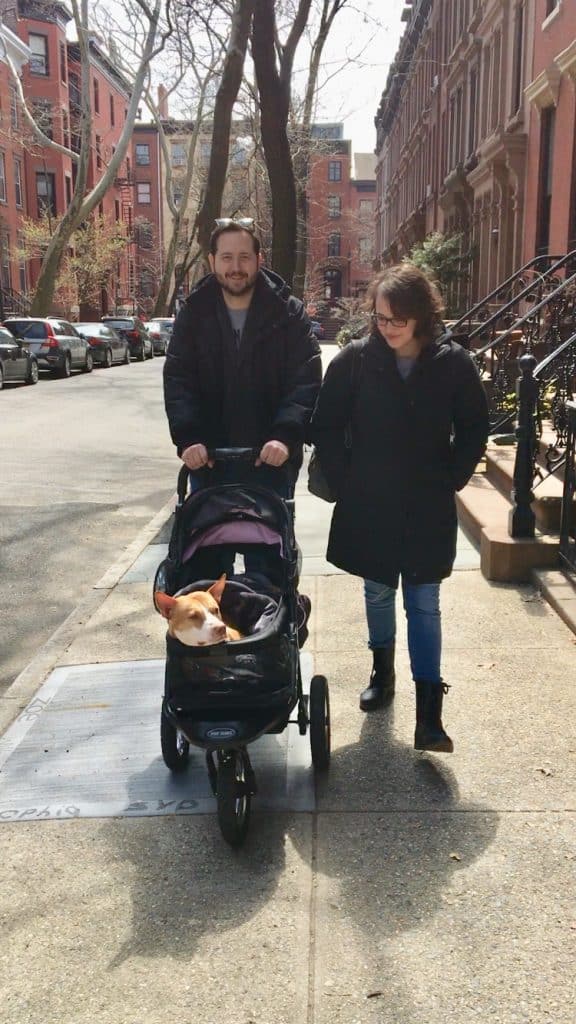 She and her boyfriend Daniel Davison, an electronics engineer, had recently bought a house. “What was missing was a dog,” Davison said.

“But I was trying to be stern,” Fournier said. “We needed to wait.” She wanted them to settle in their new home and get fencing around the yard.

Fournier began to follow Frida’s story more closely when she was brought to New York.  She watched Gamand’s videos of Frida at home.

“Frida did play bow and her front end went low on the ground and plopped on the floor to play with MacLovin,” Fournier said. “It was the cutest thing in the world and I fell in love.” 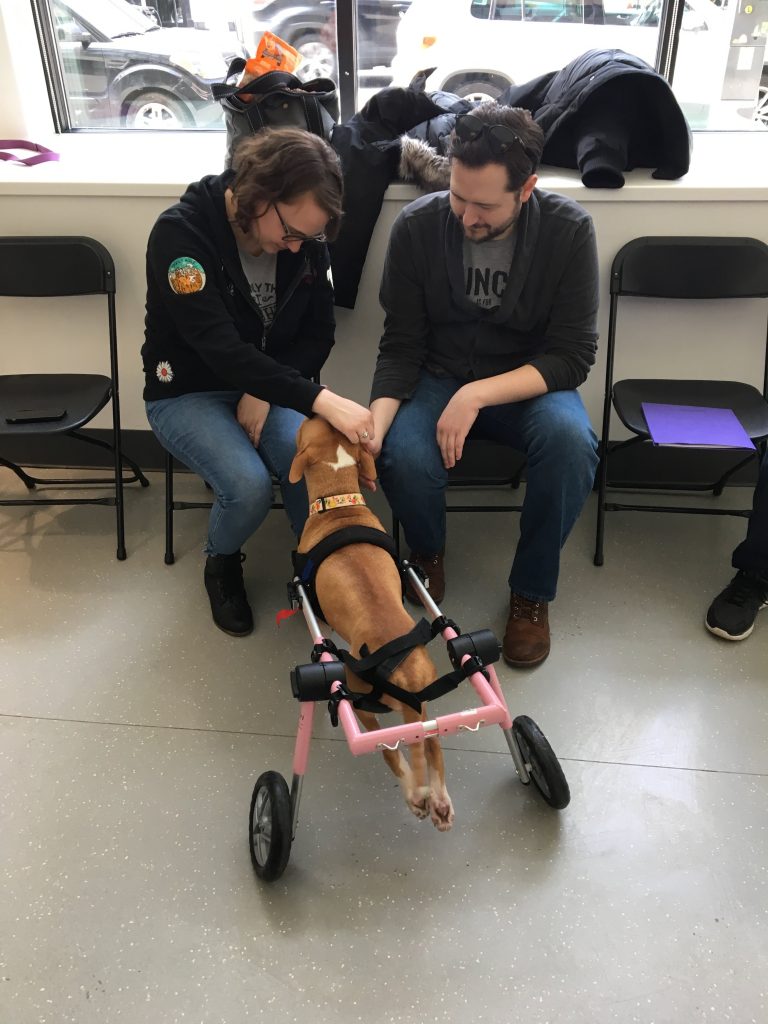 “Chelsea emailed me about Frida and her email ended with, ‘Can you ask Frida if she would come live with us in Ohio?’” Gamand said. It gave her a good feeling, so she told Animal Haven to check Fournier’s application.

Fournier was surprised when Gamand responded asking for a FaceTime virtual home visit. Meanwhile, her boyfriend was still in the dark about everything.

The day of the call came, and after cleaning the house, Fournier told Davison to get ready for a visit. “I don’t know what you’re talking about,” he said.

Literally ten minutes before the call, Fournier told Davison all about Frida’s story and showed him Gamand’s Facebook page. “I’d seen the Pit Bull Flower Power dogs in the past on the Internet and thought they were cool, but I didn’t know Chelsea was following her so closely,” Davison said. 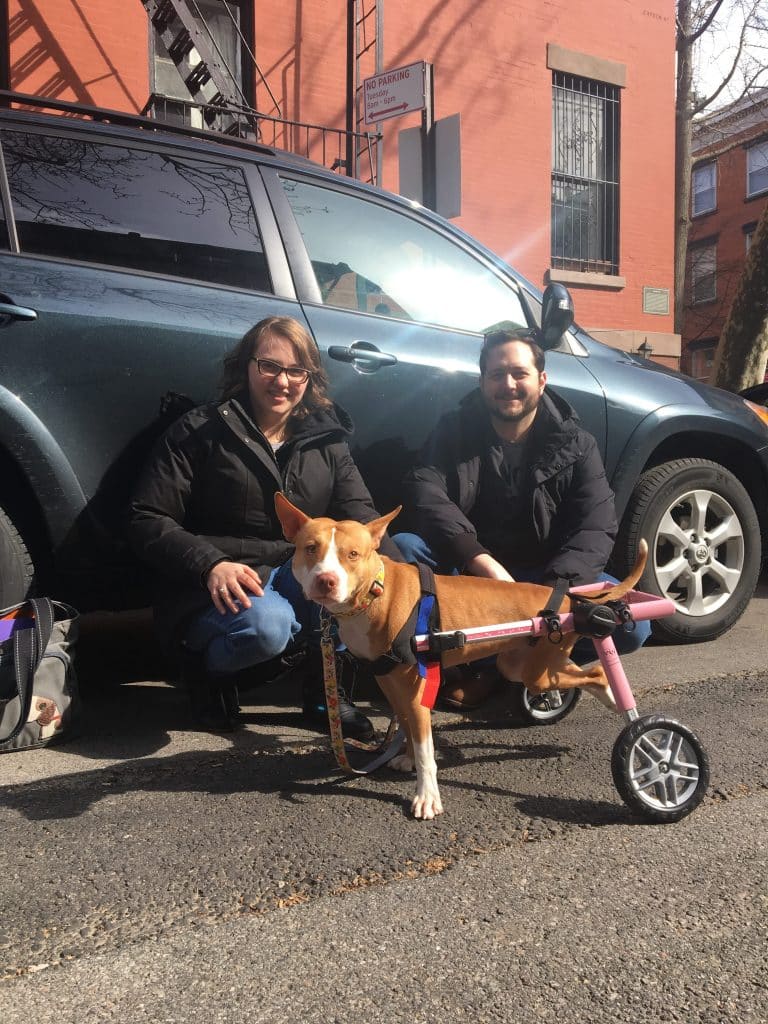 Gamand called the couple and they discussed Frida, the couple’s home, and their lifestyle. “Frida was sleeping when Sophie [Gamand] picked her up but she was still adorable,” Davison said.

Although Animal Haven initially preferred a home for Frida that was closer to New York, Gamand relayed them the information about how the couple was a perfect fit. The application was approved and Fournier and Davison made plans to go to New York. 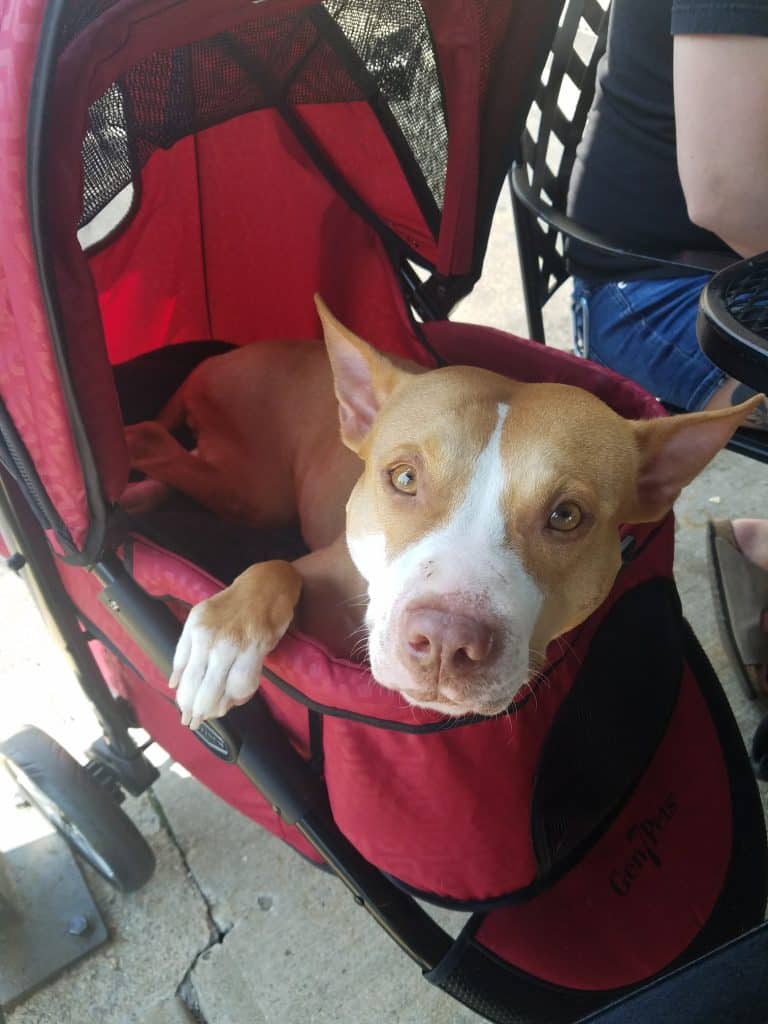 They set out on their 10-hour drive at the beginning of April 2018. Despite a couple of New York parking mishaps and their car getting towed and impounded, the pair arrived at Animal Haven on April 7 and signed the papers.

They arrived back home on Sunday, April 8. Frida fit in her new home right away, zooming around on the carpet and the yard, exploring at her own pace.

While Davison secretly had a ring for Fournier and planned to propose marriage on a trip out West, Fournier had her own little secret. She previously ordered a pair of silicone rings from Enso a week before the trip to New York.

They were both exhausted from the trip and while Davison was unpacking, Fournier and Frida were in the hallway with a message board that said, “MARRY ME PLZ.” It featured the rings and Frida’s collar hanging from it. “We sat in the hallway and waited two minutes until Daniel came out and he saw us,” Fournier said. 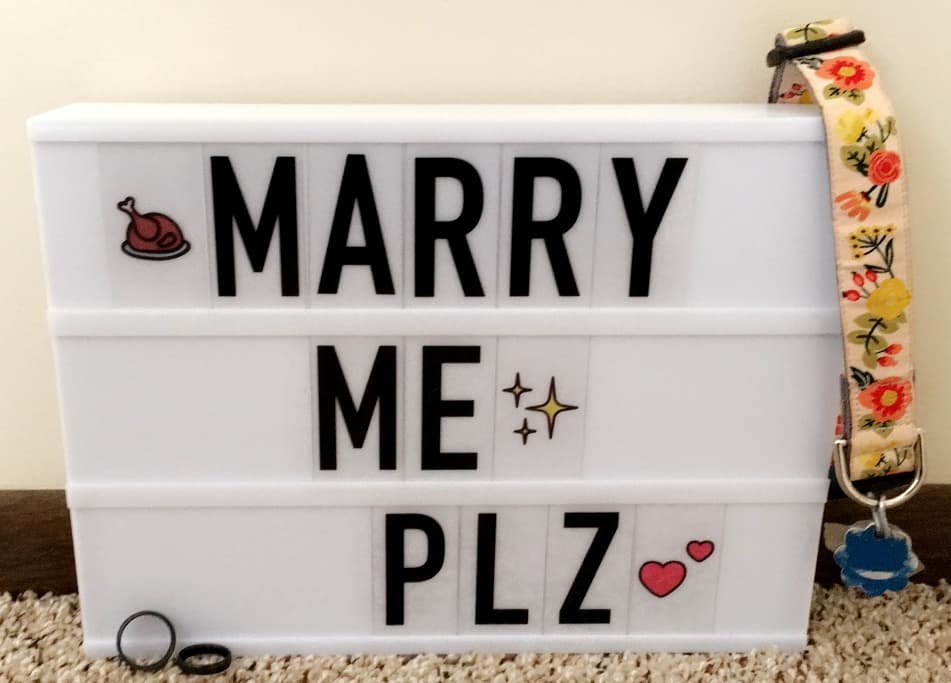 They were both in their pajamas and had not showered, but for Fournier and Davison, it was perfect—a confirmation that they were a family, which also included their other dog, Roo.

Later that evening Davison surprised Fournier with the vintage ring that he bought at an estate sale, telling her about his idea to propose. “Frida just sat there happy as a clam wagging her tail,” he said. “It was kind of perfect.”

When Frida first got to their home, she had some trouble settling down. Davison proved that love has no bounds. “Daniel took her into the car as she settles in the car nicely, and he drove her around until she settled down and brought her back and she was fine after that,” Fournier said. 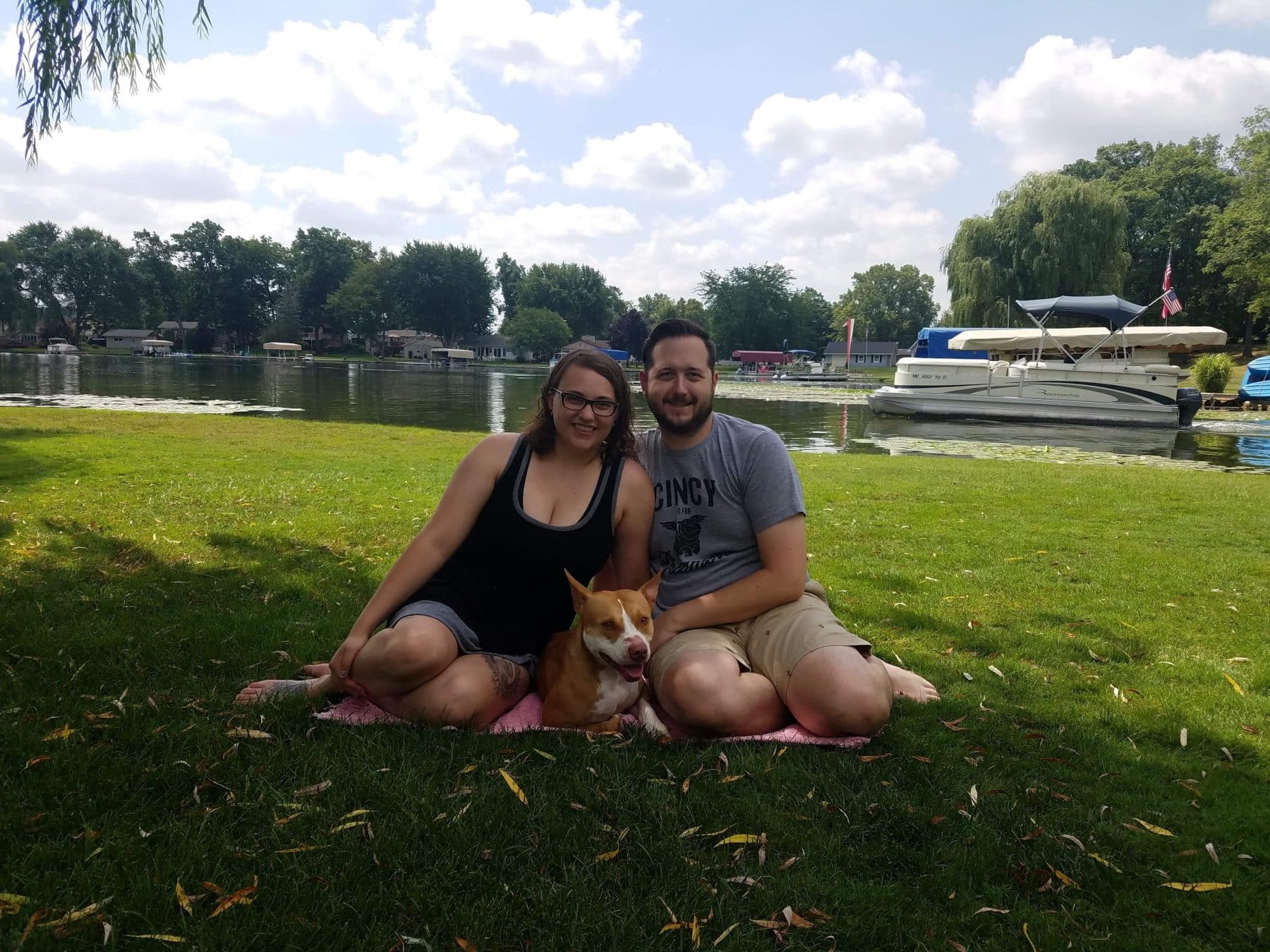 With Valentine’s Day just around the corner, Fournier and Davison say that Frida is the perfect Valentine, making them smile and laugh each and every day. “She makes you get up in the morning, and it’s nice to know she’s waiting for us when we get home from work,” Fournier said. “She’s just a sweetheart and a good dog. She gives the best kisses.” 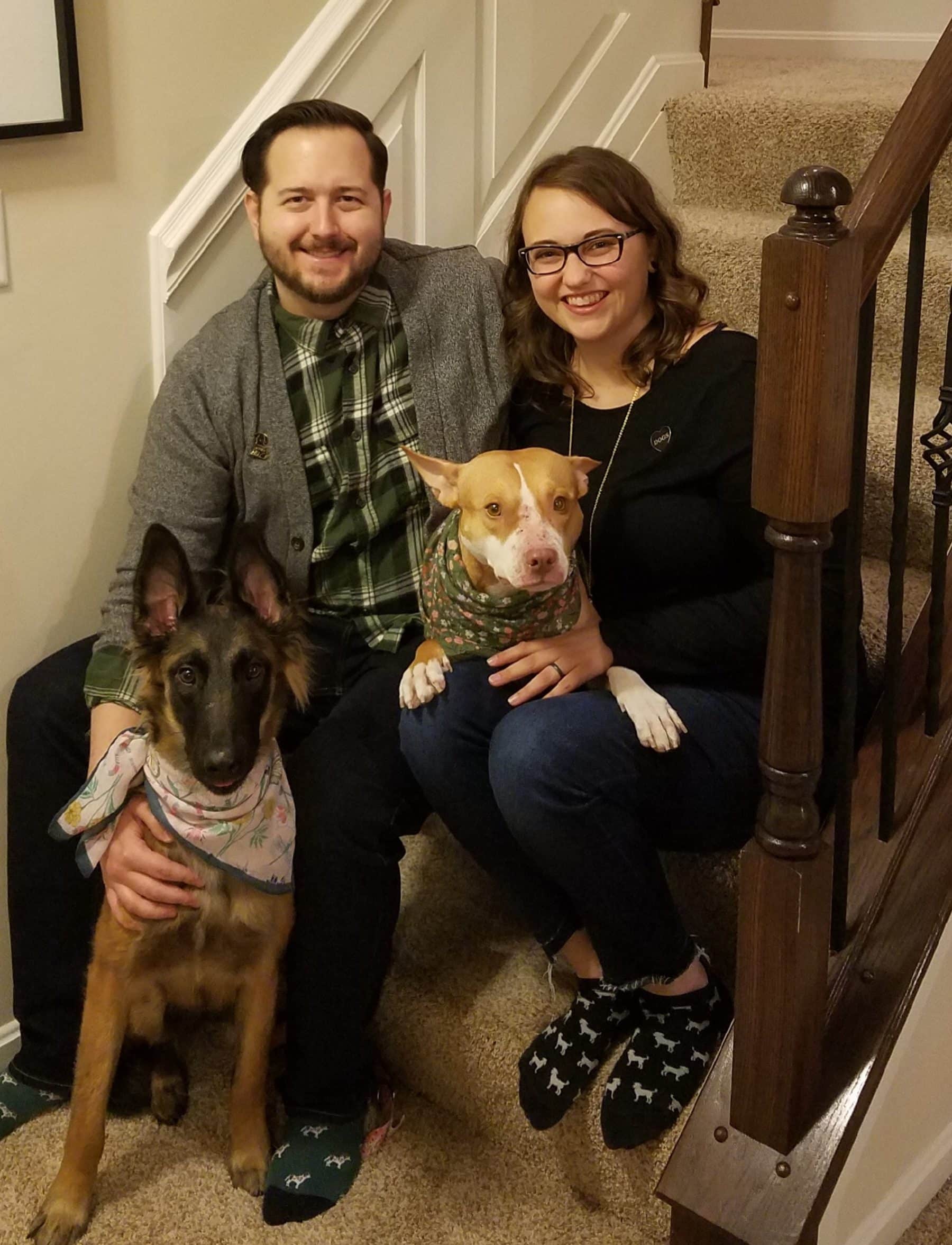 Fournier and Davison believe in the importance of rescue and that others should get to their local shelter to volunteer in some way. “It’s really powerful and really helpful,” Fournier said. “Dogs in rescue are always thankful for that love and attention.”