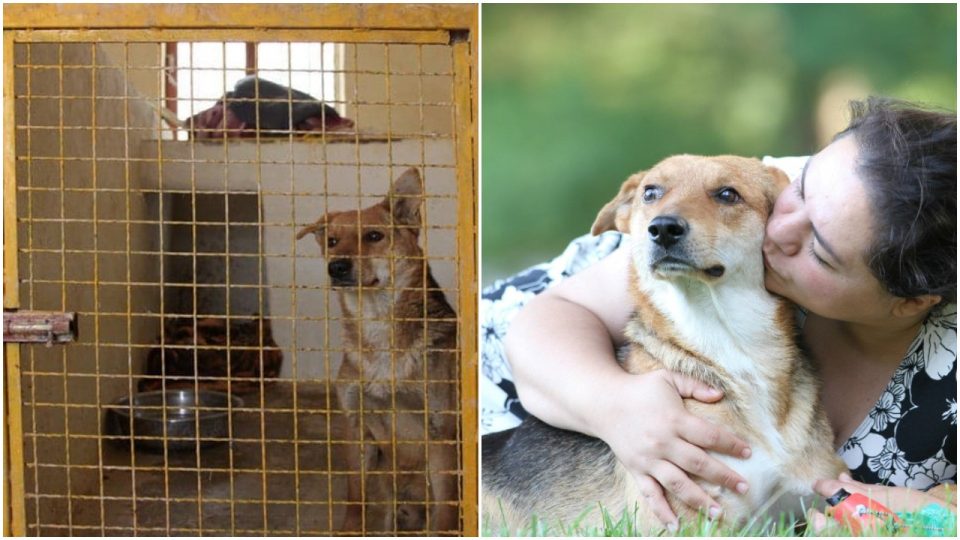 It was a cold, snowy night in Bumahen, Iran, and Mr. Mohsen was staring out the car window as an employee drove him to a work-related event. He caught something out of the corner of his eye and noticed a dog slowly dragging his frail, paralyzed body through the snow. It was a pathetic sight, and Mohsen caught his breath. And then their eyes met, but Mohsen didn’t tell the driver to stop, and they drove away. 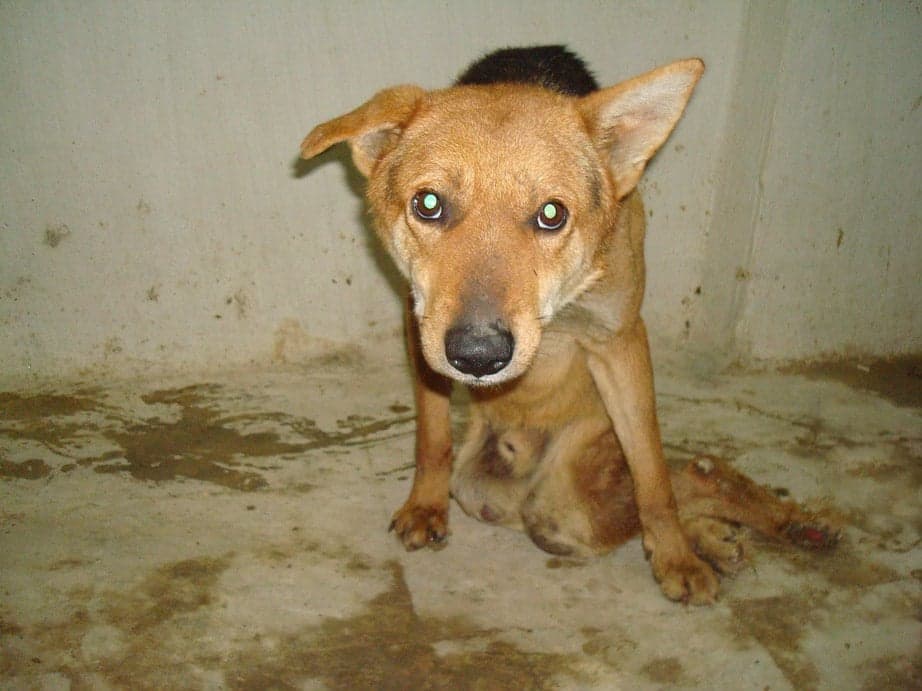 He could not get the dog out of his head. “I regret that we didn’t stop,” Mohsen later said. The next day, he asked his employee to go to the area and find the dog. It was a long shot, but he found the dog and brought him to the office.

Mohsen immediately brought the dog to a veterinarian who checked out the German shepherd mix. The dog, about five years old, apparently had lived on the streets for years, most likely had been hit by a car, and subsequently became paralyzed. He had suffered horrible abuse and had wounds all over his face, body, and ears.

A motorcycle exhaust burn on his tail led the vet to believe the dog was tied to a motorcycle and dragged. X-rays showed the damage was irreversible. “The dog is in a lot of pain and he needs to be euthanized,” the vet said. 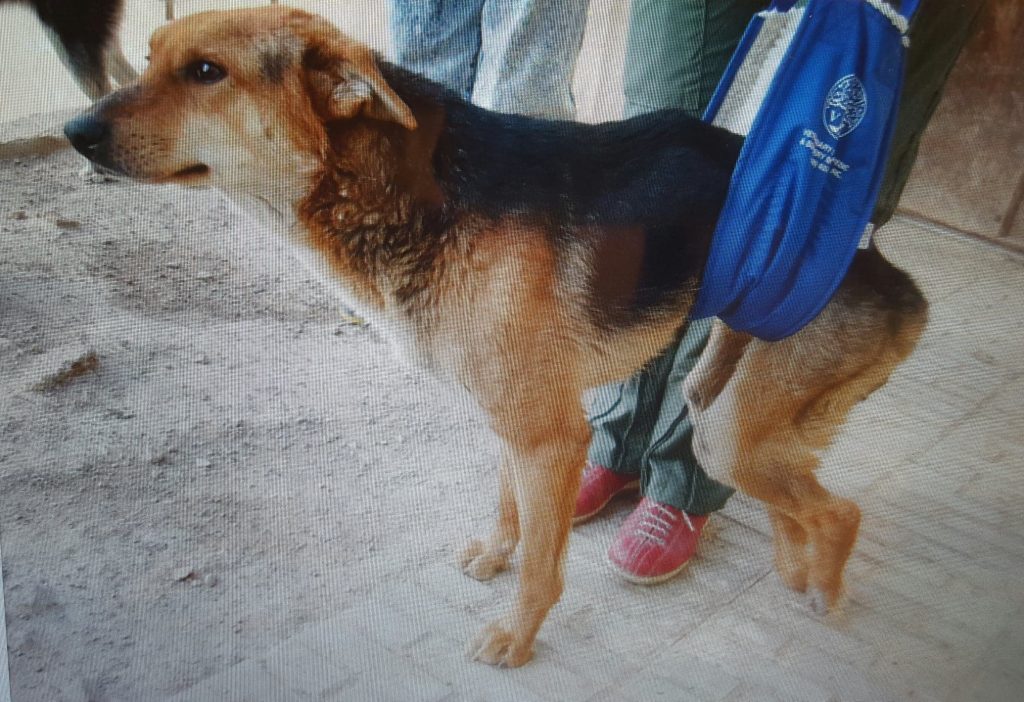 “I can’t do that,” Mohsen said, relaying the story about how he went a different route the night he locked eyes with the dog. “So, I believe our paths were meant to cross.”

Mohsen contacted Vafa Animal Shelter in Hashtgerd, Iran, for help. Vafa had about 500 dogs and offered to take the dog when a spot opened. In the meantime, Mohsen and other employees cared for the dog at their office. He would later come to be called The Miracle Dog because it was a miracle that he survived. 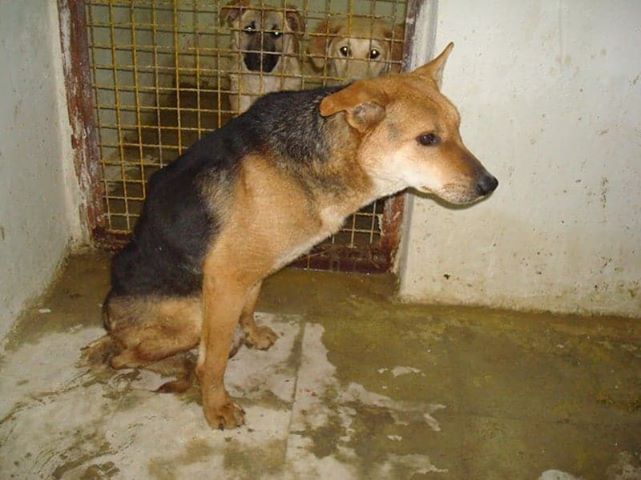 At the time, Farah Ravon, Vafa’s U.S. representative, began networking the paralyzed dog because the shelter was no place for him. Ravon found Neda, a woman who was traveling back to Maryland who volunteered to bring the dog to Washington D.C. Further networking attracted Miss Parvine who lived in France. She offered to sponsor and pay the dog’s travel expenses. Because of her generosity, Parvine was given the honor of naming him. She chose Omid, which in Farsi means “to have hope.”

Omid arrived at Dulles Airport on March 24, 2012. After subsequently moving around a bit in different foster situations and then luckily having a wheelchair donated to him, Omid eventually was placed in a foster home with a couple in D.C. The plan was to network him in the area in hopes of getting him adopted into a forever home.

Omid Finds a Family and Fame

After being fostered and then having a potential adoption fall through, Omid finally found his forever home with Bany Alavi and her now former husband Babak Alipour. Ravon had known the couple because of a heroic rescue when they helped save more than 85 dogs in California. The couple previously fell in love with Omid when they met to dog sit him one weekend.

Although it was difficult to see Omid as he was, “there was an instant bond,” Alavi said. “Omid was a very exhausted dog and so tired. He had no defense mechanism and no guard up.” Omid fit in perfectly with the couple’s other rescue dogs. 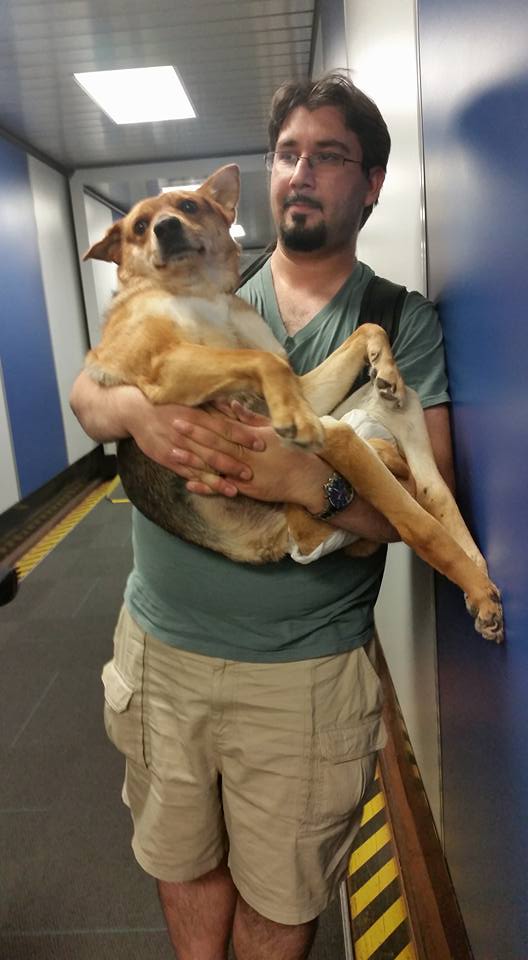 His story got around, and Omid enjoyed his celebrity status. The Humane Society of Washington D.C. had a competition for the cover of Nova Dog magazine in 2012 and Omid won. The cover was revealed at the 25th Annual Bark Ball, a black-tie gala.  Later in 2015, Omid was the subject of a short-animated film called “Omid” (Hope) that won Best Animation Documentary at the Rendezvous Film Festival. 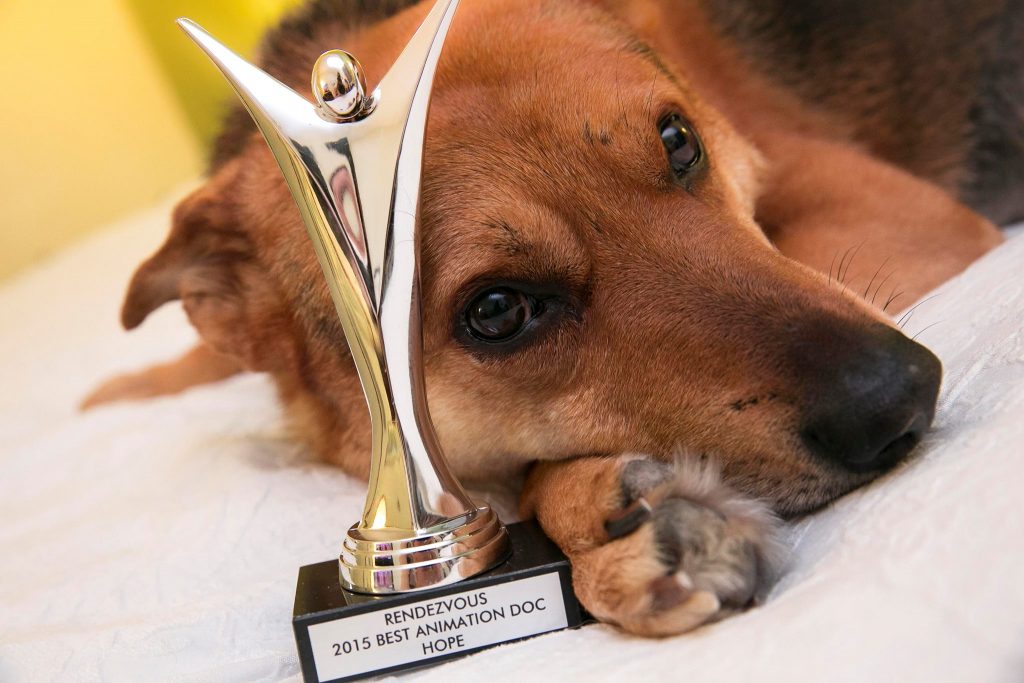 After adopting Omid, Alavi did extensive research on caring for a paralyzed dog because she and Alipour had no experience. 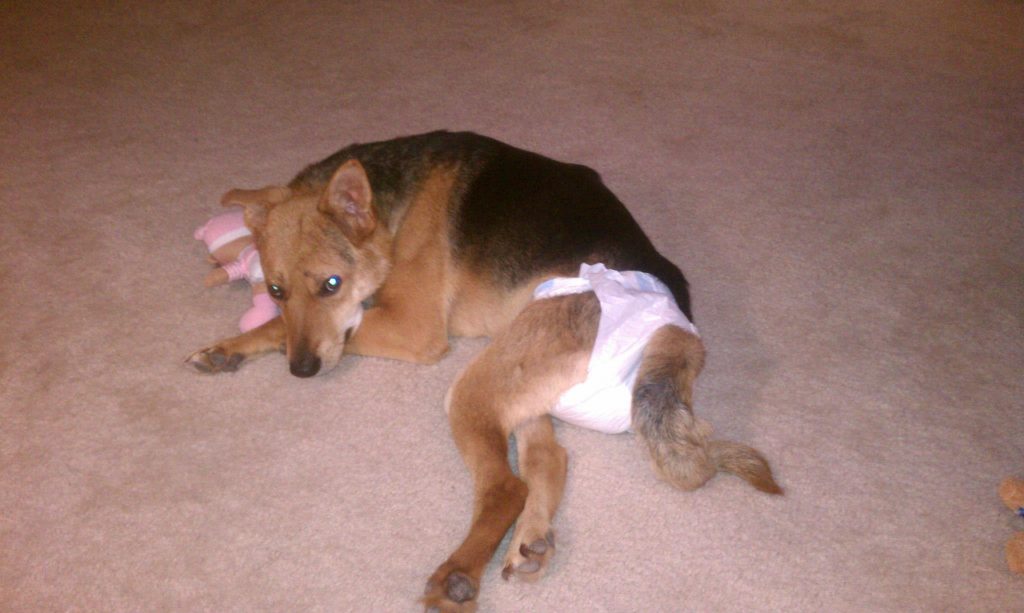 Diapers became the center of everything. “I bought every diaper on the planet, every dog diaper, every human diaper, we created diapers, we would buy diapers and alter them,” Alavi said. Since the doggy wheelchair is only for walking and you cannot leave a dog in it 24/7, Omid would scoot around and the diaper would slide down. “The diaper comes down and he’s a male, and his little thing would stick out of the diaper and he would pee. That was a challenge but not the poor dog’s fault.” Then Alavi learned about expressing a dog’s bladder, and things slowly got better.

“Omid and I learned together, and we have a routine. Now it’s a piece of cake.”

A Transformation for Alavi and Omid

At first, Omid allowed almost anyone to touch him, but as time went on, he not only became very protective of Alavi, he no longer wanted strangers petting him. He simply did not trust others anymore. 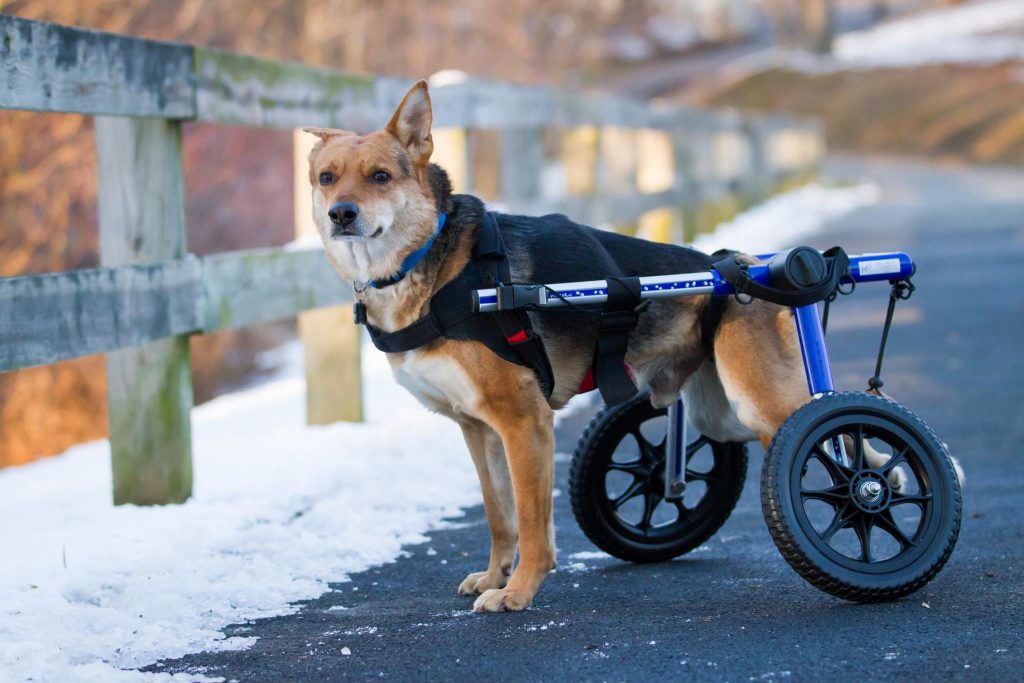 “I’m very alert and always aware of my surroundings, and although I’m aware, on that particular night I somehow didn’t hear a drunk man,” Alavi said. It was after midnight and so dark that she did not see the man who had passed out and was sleeping on the grass under a tree. She and Omid were walking when the man suddenly stood up and walked behind them. “Omid turned around and gave the biggest growl. When he gets like that he becomes so vicious and intimidating even though he’s in a wheelchair.” The man got so scared and fell back onto the grass. Alavi then pulled Omid and they practically ran home. 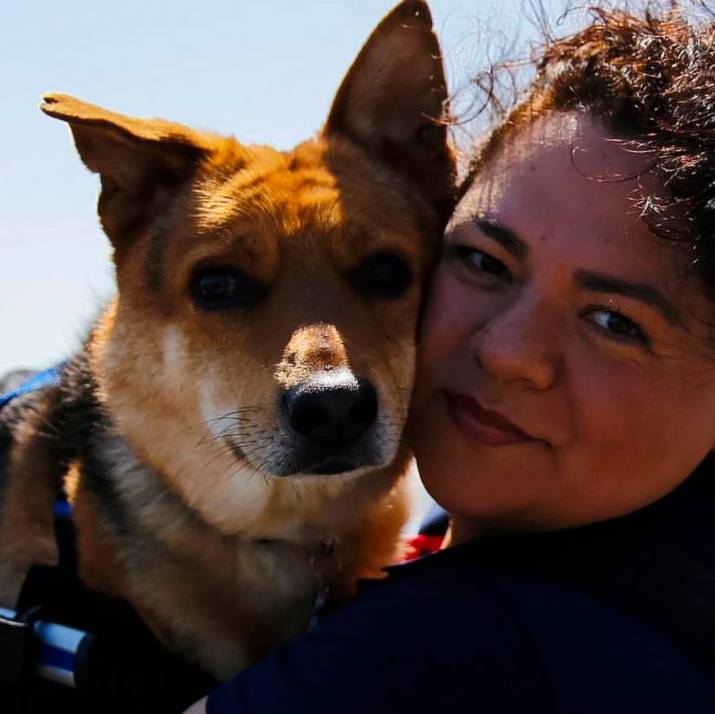 “That night I was thankful, grateful, appreciative for his demeanor and realized ‘OK, I’d rather him be like this and protect me and we watch out for each other,’” she said. “I take care of him the best I can in regards to what he needs, and he’s taking care of me the way his instincts tell him.” Alavi ensures that Omid is not put into situations that are not good for him and prefers to keep him away from strangers. “No one can come up and pet him without me catching it,” she said.

“He’s gone to hell, survived, and came out of hell but in the process is paralyzed and yet he is so happy-go-lucky,” Alavi said. “How can you not learn from that when you are witnessing it every single day?” 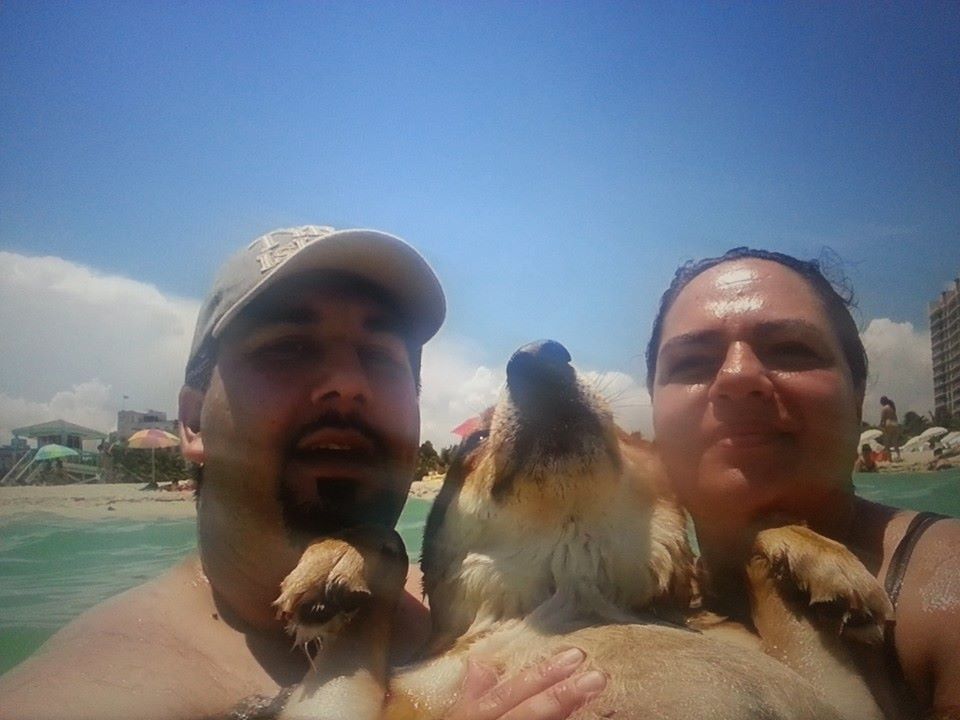 Omid is goofy and continually makes Alavi laugh, from the way he chews to how he just enjoys everything in life. “I have definitely become a better person” because of Omid, she said. “I’ve learned a lot of important life lessons that I never really learned as well as I did through Omid. It was God’s way of saying, ‘I have to teach this person so that she’ll understand,’ so he did it in the form of a dog.” 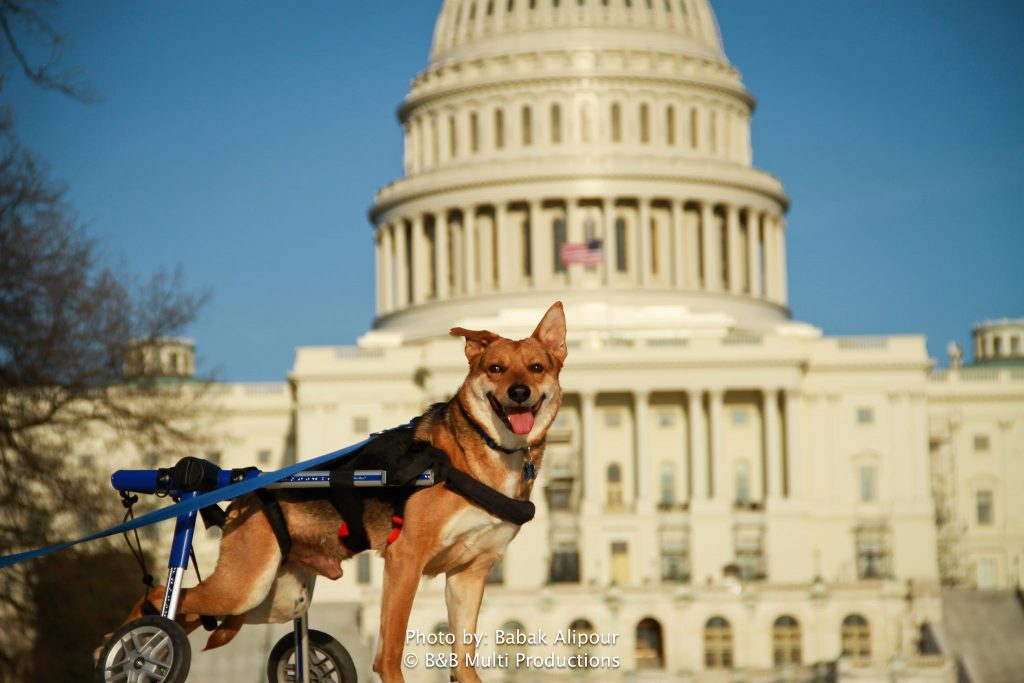 “Omid has enhanced my life, he’s changed my life, he has saved my life,” she said.  Because of that, she says the least she can do is be an advocate for paralyzed dogs. “I owe it to him and to all of the animals.”

Over the years, Mohsen desperately wanted to know what happened to the dog he spotted in the snow that one winter’s night. He checked with the Vafa shelter. When he got word that the dog went to America and found a loving home with a Persian couple, he wrote a letter to Alavi: 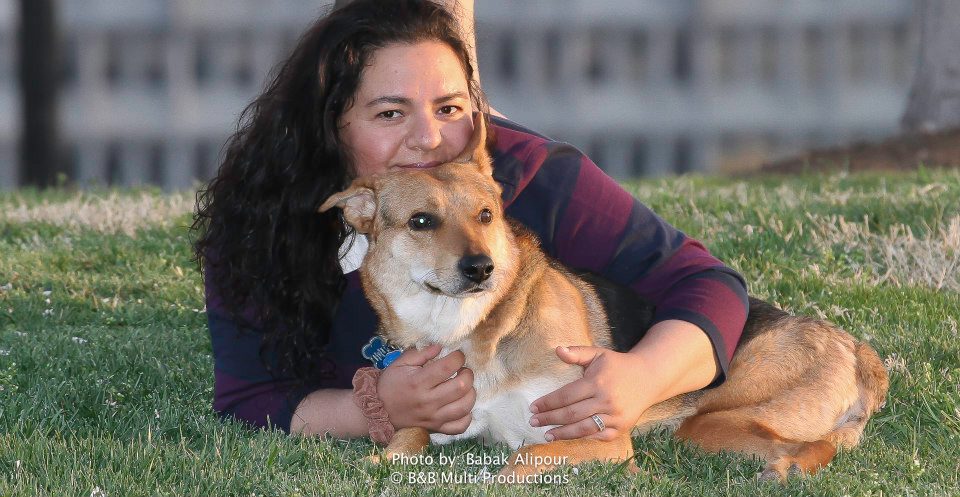 “I wish to be a drop of water in that ocean that is your great big heart to have opened your home to be able to take care of this dog as well as you have.”

For anything Omid-related, questions on disabled dogs, or to send fan mail, email Omidthemiracledog (at) gmail.com.