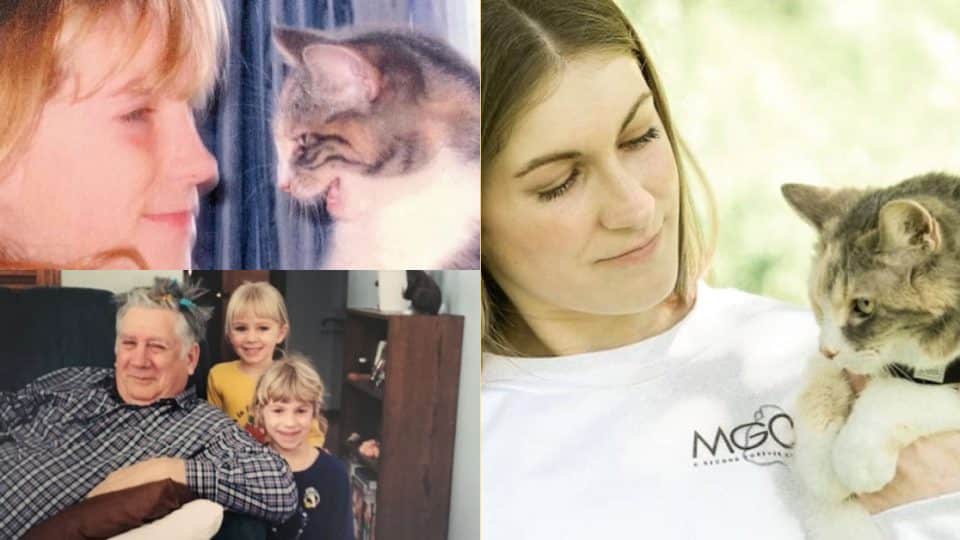 Angela with Mackenzie as a kitten; with her grandfather and sister; and with adult Mackenzie. Photos courtesy of Angela Rafuse

In December of 2020, Angela Rafuse set out to post a cheerful “Merry Christmas” video of herself and Mackenzie the calico cat for her family.

“But before I got to that part, Mackenzie scratched me across the face… so dramatic,” she said. “I posted (the video) on Facebook and said, ‘Merry Christmas from my murder cat.”

Rafuse’s cousins commented with “this should go viral,” and suggested she send it out to a wide audience. She did, and indeed it quickly went viral, with more than 75,000 views.

“A lot of people were like, ‘what a weird cat. Do you have more videos?’ So, I started posting different ones for the year. And so many people started commenting and saying, ‘Why did you name your cat Mackenzie? Because that’s not a normal name for a cat. So, I said, ‘she’s my grandfather’s cat.’”

Rafuse had taken in Mackenzie when her grandfather passed away. When she revealed that information, people began sharing their stories  about how their grandparents’ pets had ended up in shelters.

“I’ve worked in nonprofits for the majority of my career, so I’m very used to finding resources for people when they are in need,” she said. “I was Googling resources to send them to these strangers…and nothing existed.”

Rafuse, who works in marketing, said she thought finding homes for pets is simple marketing.

“It’s just marketing cats, and it can be completely virtual. It’s just finding a home. I can do this,” she said. “I don’t know where my confidence came from because I don’t consider myself a confident person whatsoever. I really see it as more or less a divine intervention that I was like, I’m going to start a business. I’m going to call it My Grandfather’s Cat.”

Some Good From Grief

Rafuse said the story begins in September of 2018 when her grandmother passed away.

“She left behind her then 13-year-old cat, Mackenzie,” she said. “And then Mackenzie became very attached to my grandfather. My grandparents had been married for almost 60 years, so after my grandmother passed away, my grandfather lost his best friend, he lost his life partner. He slowly started to decline as well. And within a year, he was in the hospital, and we knew at one point he wasn’t going to come home.” 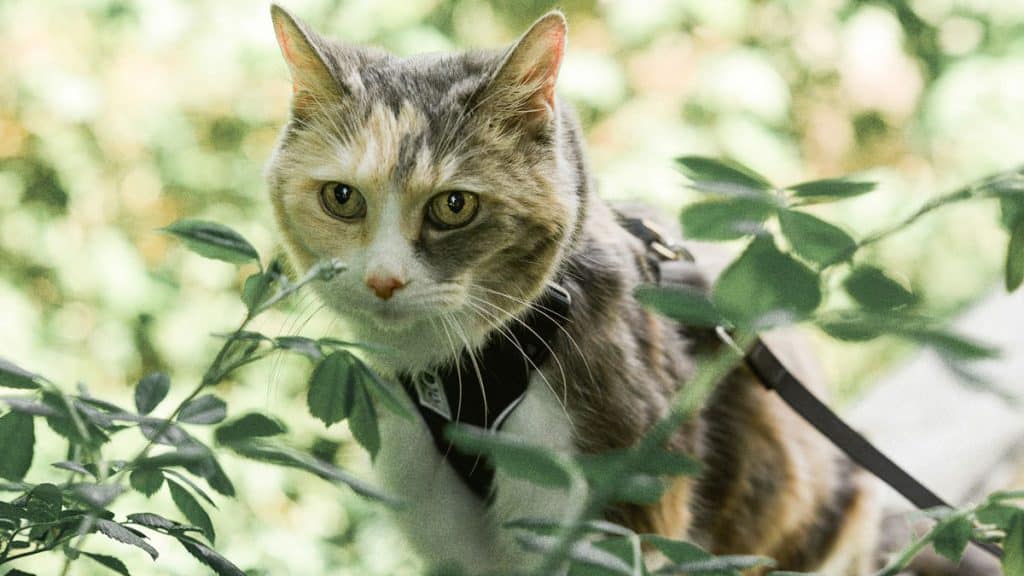 Mackenzie was then 14 and still living in her grandparents’ house and Rafuse and her parents were caring for the feisty feline.

“But she needed a home,” said Rafuse.

And Mackenzie was a growly, cranky cat who was quick to swipe if she wasn’t happy.

“I was like, she is going to spend the rest of her life in a shelter, and there was nobody to adopt her,” said Rafuse. “In my family, everybody either travelled a lot or they had pets of their own, all these very valid reasons that everyone in our family had that no one could adopt her.”

“I was moving home from Toronto to Halifax at the time, and I just said very spontaneously to my dad on the phone, ‘What about Mackenzie? And he said, ‘We’ll find a good home for her and I said, no, I’ll take her.’”

When Rafuse moved home, she and her dad went to her grandparents’ house to pick up Mackenzie.

“My dad’s a welder. He had welding gloves to use them to put her in a carrier,” she said. “That’s how not friendly of a cat Mackenzie was. And we got her to my parents’ house.”

Because her parents had two elderly cats at the time, Rafuse and Mackenzie moved into the basement. She had planned to move into an apartment but then the pandemic hit so she and Mackenzie stayed put.

“Over the next year I really got to know Mackenzie and I was working from home and we developed a bit of a friendship, like we were getting there…she hits me less, and she was also building a relationship with my parents as well, more so my dad.”

When Rafuse’s parents’ cats passed away, Mackenzie was allowed the run of the house.

“The first time I took her upstairs, she just screamed the whole time,” said Rafuse. “She’s just scared and that’s all it is. She’s just scared, and she has to be with someone she trusts.”

“She really loves my dad,” said Rafuse. “They have a very special relationship, and she is the last thing he has of his parents as well, so she’s very special to him. “

Rafuse regularly visits “Grumpy Mack” and the two even enjoy outdoor adventures together, from kayaking to hikes.

Before Rafuse got started on My Grandfather’s Cat, she thought of it as a little side project. She got a logo and everything set up for the official launch. She just had to pick a date.

She scheduled everything to launch on May 18, 2021, which would have been her grandfather’s 85th birthday.

“I got everything ready and launched it, and I haven’t slept a full night since,” she said. “We have just snowballed and it’s just been incredible.”

So far My Grandfather’s Cat has placed 50 cats with new families. 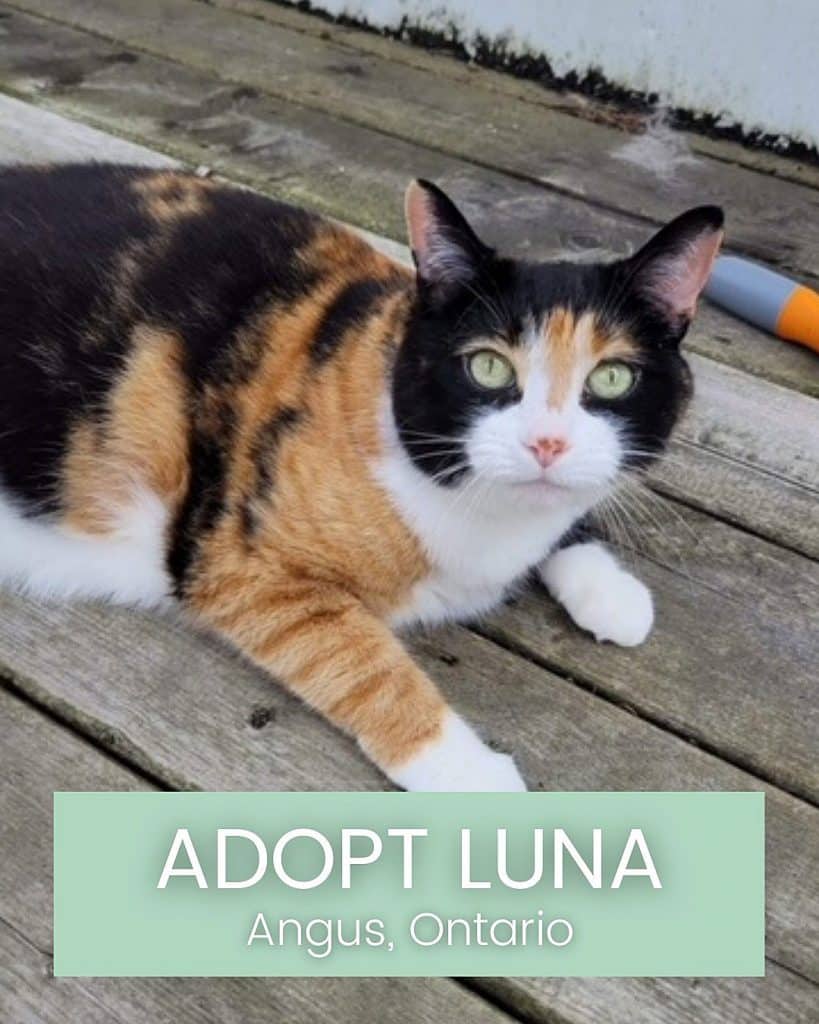 Pets up for adoption are posted on social media. Photo courtesy of My Grandfather’s Cat

Volunteers Are the Glue

When a senior or terminally ill person needs to find a home for their pet—dog or cat—they reach out via the website.

“I call them, talk to them, make sure they’re a fit for our service, then I connect them with a volunteer,” said Rafuse. “We’ve got over 15 volunteers across Canada, all incredibly wonderful women.”

The volunteer will talk to the person, learn more about the situation and get information about the cat.

“People love to talk about their animals, so sometimes these calls can be up to an hour with people just describing their pets,” said Rafuse. “Then the volunteer takes that information, writes the profile and gets some photos, works with the senior to make sure the profile sums up their animal.”

Then that profile is sent out via email list, social media and the My Grandfather’s Cat website.

“Once someone is interested, they apply and the volunteer vets them, and we do everything through phone calls so the volunteer will schedule time to talk to these people. Just learn more about the family, their situation,” said Rafuse.

Since many seniors have cats that are seniors themselves, it’s important to make sure the adoptive home is a quiet one. 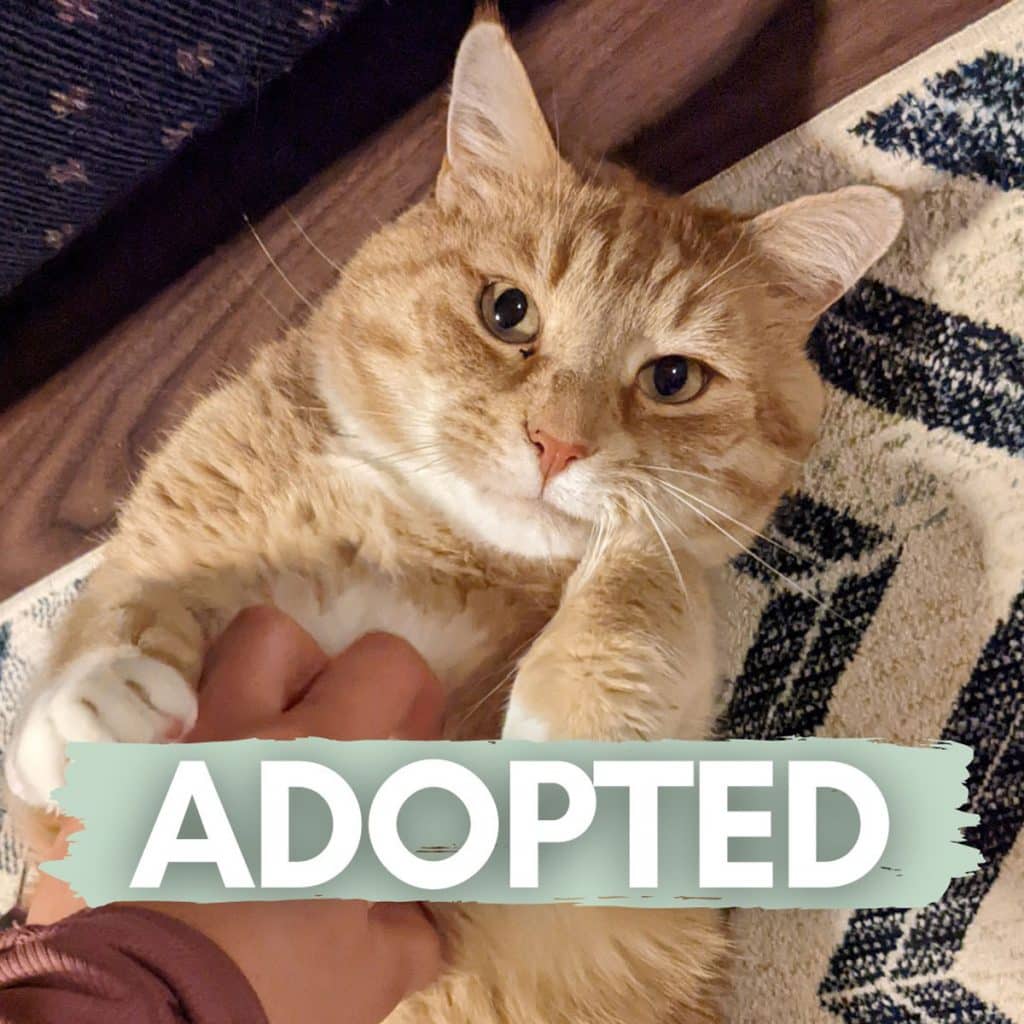 Another happy ending. Photo courtesy of My Grandfather’s Cat

“If the volunteer deems them to be a good fit for the animal, they pass their information along to the senior person, and we let them vet them however they see fit,” said Rafuse. “Sometimes that’s a phone call, sometimes they like to meet in a coffee shop first. “

Rafuse said about 95% of the time she’s working with a senior’s adult child or children rather than the senior themselves.

“They’re adults like 40, 50, 60 years old that are working to help their parents move into a retirement home,” she said. “So, they’re there throughout the process. They can do a meet and greet with the animal. I let them do whatever they see fit to determine what’s the best home for their animals then they ultimately choose who they want to adopt their animals.”

There is no charge for the service and there is no adoption fee.

“It’s all done through kindness and compassion,” said Rafuse. “And we’re funded through the generosity of our donors and through merchandise sales.”

Transportation is arranged between the senior and the adoptive family. An experience Rafuse had early on helped her decide that My Grandfather’s Cat wouldn’t transport cats.

She had just launched My Grandfather’s Cat when she got a call from a man who said he was moving and couldn’t find anyone to take his 14-year-old barn cat.

“He had planned to get him euthanized,” said Rafuse.

Rafuse couldn’t let that happen so she picked up the ginger cat with the unusual name, “Bore,” and brought him home.

“He is just the sweetest, most loving, cuddly boy full of personality,” she said.

Within three days she found Bore an adoptive family and she agreed to transport him to his new home, which was a 90-minute drive away.

“And when I got him there, they changed their mind, and they decided they didn’t want him anymore,” she said. “So, I then had this big fat 14-year-old cat in my car, pulled over on the side of the road, called my mom, bawling my eyes out. And I was like, what am I going to do? This isn’t going to work. I’m going to be stuck with all these cats.”

She brought Bore home again and My Grandfather’s Cat found him yet another adoptive family. But they called two days later and said he wouldn’t come out from under the couch.

Rafuse, who had decided “Bore” was more of a “Bo,” went back to the house and when she called Bo’s name he came right out from under the couch and cuddled in her arms.

Bo had chosen his family.

“I felt like it was another divine intervention, that this was the best-case scenario,” said Rafuse. “So, I decided to adopt, and he’s very much mine now, my little orange best friend. He’s not little, but he’s my orange best friend.“

Snuggly Bo now has his own social media presence.

The Future Is Feline

Rafuse emphasizes that the service is available across Canada to anyone who is unable to care for their pet due to health reasons.

“I just want to make sure that’s clear,” she said. “It’s essentially you can’t care for your animal because you’re at end of life, no matter what age you are.”

She said she is repeatedly asked if the service will be coming to the U.S., but until she can expand to the entire United States, she doesn’t want to expand, she said.

“From personal knowledge and experience and reading case studies… chapters don’t work. Everybody’s gung-ho to begin with, but then chapters fall apart,” she said. “So, we will be expanding to the U.S. one day, but I need to make sure all of our ducks are in a row, our service is perfect. And then we will be coming to the U. S., but when we’re ready.” 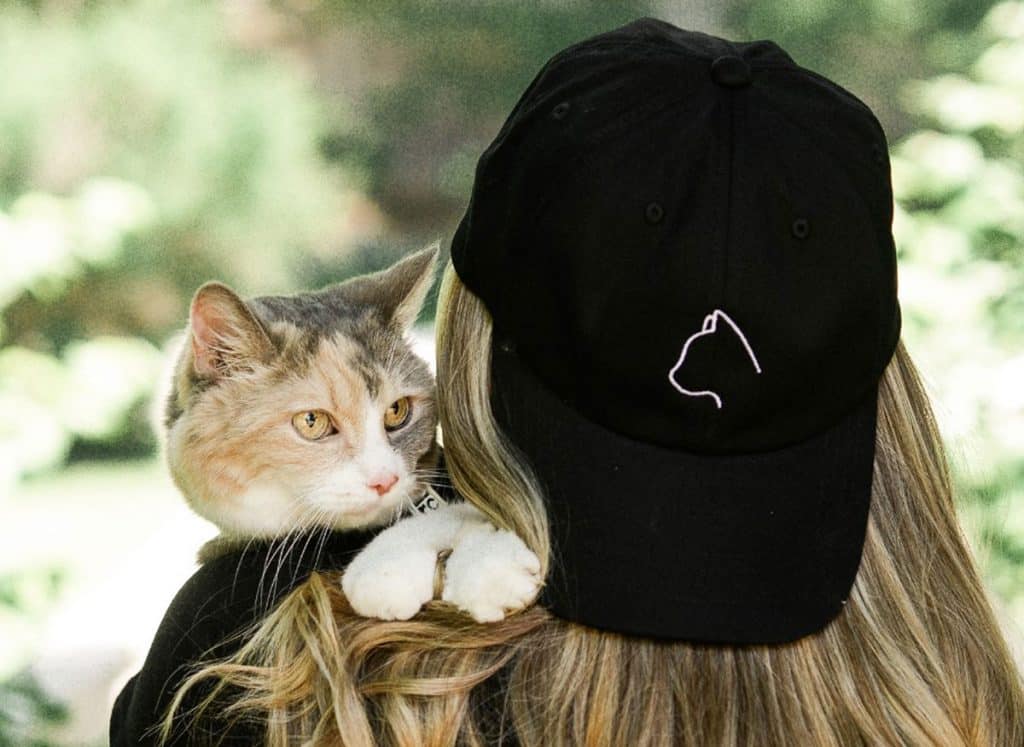 Photo courtesy of My Grandfather’s Cat 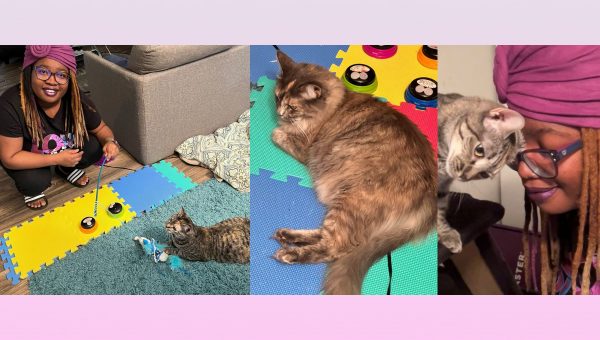 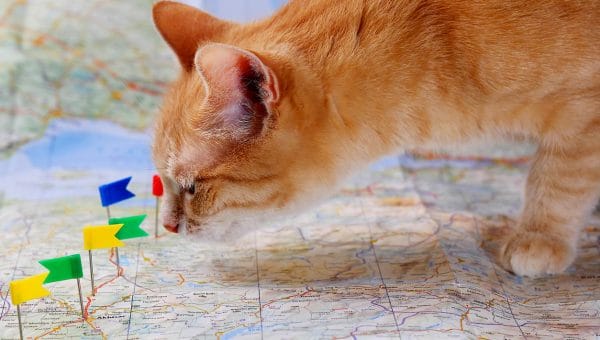