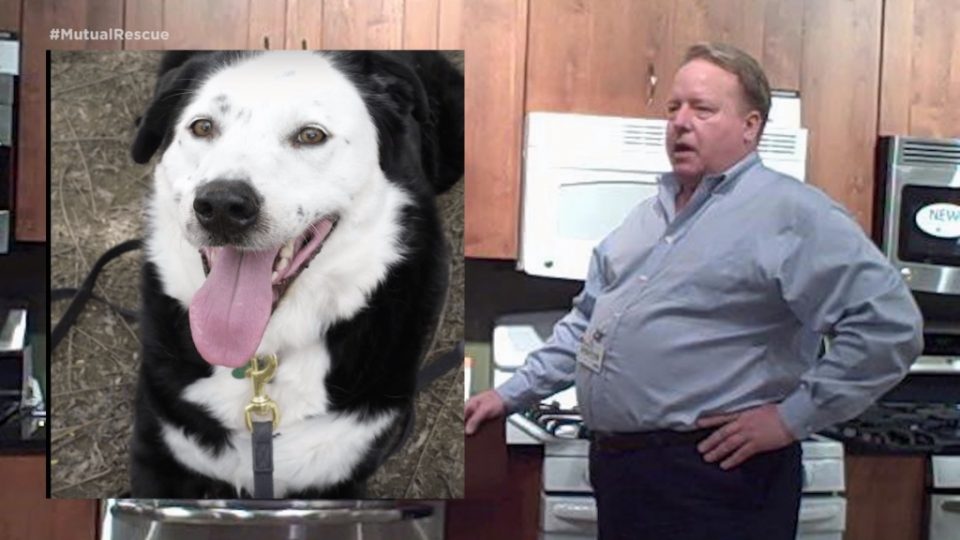 Thank you to Pet Connection magazine for this guest article.

Six years ago, Eric O’Grey received some sobering advice from his doctor. Eric, who was 51 years old in 2010, tipped the scales at 330 pounds. His blood pressure was 160 over 100, he had type 2 diabetes, and he wore size 4 XL shirts. His doctor’s advice? Buy a cemetery plot, because he’d likely be dead within the next five years.

But then Eric consulted a naturopathic doctor who gave him an altogether different path: eat a plant-based diet—and adopt a shelter dog to facilitate his weight loss and overall improved health. Dr. Preeti Kulkarni’s prescription would save Eric’s life and impact millions of others. 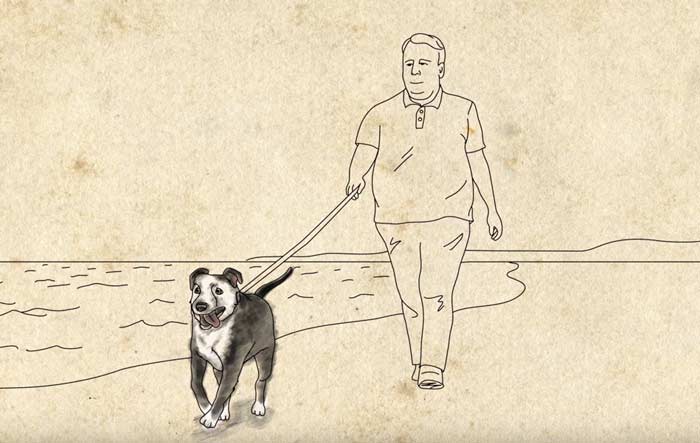 “Treating the ‘whole person’ rather than just the disease is very important and Eric’s story is a prime model for this approach to treatment,” explained Dr. Kulkarni.

“On Eric’s first visit, I noted that he was very hesitant to make eye contact. He mentioned that his social life was non-existent and he was losing self-esteem due to his body weight. All his life, he hadn’t eaten a single meal without meat and the only vegetables he regularly ate were potatoes. Based on all of this, my first few recommendations to him were: add a variety of vegetables to your diet, substitute the meat with vegetarian sources of protein, and start walking daily to get exercise. To motivate him, I recommended that he adopt a dog. This would force him to be out of the house at least 30 minutes twice a day.”

Finding a Dog He Could Relate To

Eric contacted Humane Society Silicon Valley (HSSV), where he asked to adopt an obese, middle-aged dog—a dog who he could relate to. HSSV matched him with a dog named Peety, who had lived in a backyard for most of his life. Peety was overweight, suffered from a skin condition, and looked dejected when Eric first met him. But shortly after Eric adopted Peety, this dejected, neglected dog began to rescue him right back. Over the course of many months, Eric lost 150 pounds, his health issues resolved, and he began life anew as an athlete fueled by a plant-based diet.

“Once he adopted Peety, not only did he start exercising, his personality began to change, too.”

“Once he adopted Peety, not only did he start exercising, his personality began to change, too,” Dr. Kulkarni said. “His confidence was returning and he had the most amazing results. I believe that he followed all the recommendations in his weight loss program and kept pushing himself, because he now had a friend. A friend that looked up to him. I applaud Eric for his commitment and he has earned the title of ‘the most compliant patient’ in my practice.”

“Peety’s love for me was absolutely and unconditional, which taught me the meaning of true friendship and how to love myself and others,” Eric said. “Because Peety helped me believe in myself again, I was able to lose weight by sticking with my new healthy lifestyle and walking him for at least half an hour twice a day.”

“Peety believed that I was the greatest person on Earth, so I decided to become the person that he believed me to be.”

“I was unconscious until Peety came into my life,” Eric said, “but Peety believed that I was the greatest person on Earth, so I decided to become the person that he believed me to be.”

The Little Film That Could

Inspired by the dramatic changes they’d both experienced, Eric emailed HSSV to tell them how profoundly Peety had impacted his life. When HSSV started a new initiative called “Mutual Rescue,” they recognized that Eric and Peety’s story dovetailed beautifully with the concept that helping animals also helps people. HSSV and Mutual Rescue decided to partner with socially-minded filmmakers to turn Eric and Peety’s story into a short movie – and they had no idea just how big that little movie would become.

The poignant six-minute film depicts Eric and Peety’s transformation, their bond with one another, Peety’s heartbreaking cancer diagnosis, and how he died in Eric’s arms. “That was the saddest day of my life,” Eric recalled. But that wasn’t the end of the story—six months after Peety’s death, Eric adopted again: he visited Seattle Humane and adopted a young black Lab mix. This new dog, named Jake, became Eric’s constant companion – and the catalyst behind the next chapter of his life.

As of this writing, the “Eric and Peety” movie has been viewed more than 65 million times and it has inspired the creation of several more Mutual Rescue films, which are set to be released in 2017. At age 56, Eric O’Grey, who once was given less than five years to live, feels healthier and happier than ever: He’s the star of a beloved short film, an inspirational speaker that shares his story to help others, has a book that’s set to be published in 2017, and has the love of a rescue dog who was so happy to rescue him back.

Weight loss is one of the most common New Year’s resolutions for people to make, but it’s also one of the most difficult ones to keep. But adopting a rescue dog can help you lose weight, improve your overall health, and transform your life, just as it did for Eric. Consider adopting a pet for weight loss as a way to keep your New Year’s resolution! Adopting or even just spending time with an animal as a volunteer at an animal shelter can dramatically impact a person’s physical and emotional well being.

Dog trainer Julie Forbes has some advice for those who are seeking a dog to help them maintain their fitness.

“Longer legged dogs make better jogging buddies,” she explained. “A shorter-legged dog like a Dachshund could make a good walking and hiking buddy, but for running, you want to look for long-legged dogs with light frames.

“Behaviorally speaking, you’ll also want a dog who can acclimate to different environments. You’ll want to find a dog who’s energetic, loves to run, and is happy to be outside. But give them time to acclimate and remember that conditioning is a factor for dogs just as much as it is for humans. Build up their stamina.”

Heidi Beck, the leader of Seattle Animal Shelter’s Get Fit With Fido volunteer team, agreed that there are certain characteristics to look for with a potential “workout buddy” dog.

“When we’re selecting shelter dogs to take for a run, we look for dogs that seem fit, energetic and excited to get outside,” she explained. “It’s great if they have good leash manners, but it’s not essential because that’s something that can easily be learned later.”

Seattle Animal Shelter’s “Get Fit With Fido” program includes a team of runners that take shelter dogs on five-mile runs three times per week. “The dogs wear banners saying ‘Adopt Me’ and the runners wear bright jackets with the animal shelter logo on them, so we’re visible as we run along the waterfront through Myrtle Edwards Park and the Olympic Sculpture Park,” Heidi said. “It’s a win-win! The dogs get exercise, fresh air and exposure to park visitors who just might want to take one of them home, and the runners get exercise and quality time with dogs.”

This article originally appeared in the Holiday issue of Pet Connection Magazine. Visit their website or visit them on Facebook to learn more.