On September 29, with more than 1,000 viewers watching on Facebook, the top five finalists of the 2020 Miss Dog Mom Pageant anxiously waited to hear who would take home the 2020 crown.

Seven judges—including current Miss World Massachusetts Alissa Musto, pet fashion designer Roberto Negrin, and pet brand For Dirty Dogs co-founders Utundee and Natishka Saunders—had cast their votes. When runner-up Stephanie Wert and her dog Barney were announced, it took a second for Talia Page to let it sink in that she and her dog Harvey won, and that they needed to take their first official walk as the winning duo.

“Once they announced the first runner-up I knew that I was the winner because there were no other places left,” Page said. “I did not expect to win this. I was certainly surprised. Beauty queen I am not.” 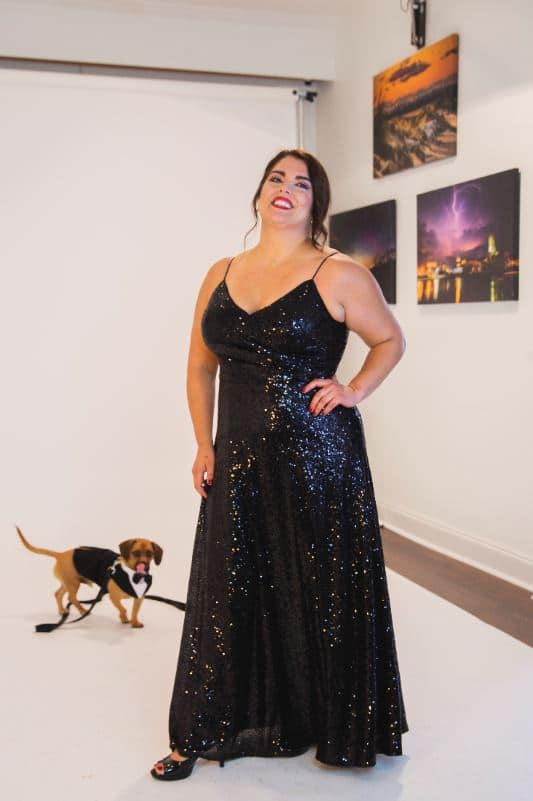 A Pageant by Any Other Name

In a world where there’s definitely no shortage of pageants, from Miss America to Miss Universe, the Miss Dog Mom Pageant’s time has come.

Now in its second year, the pageant has all the fanfare, gowns, runway walks, and style that other pageants have. But it also has that furry something extra that the others don’t: adorable, runway-ready dogs strutting their fluffy stuff alongside their moms.

“I wanted to do the pageant three years ago, and I kept delaying putting it together because I doubted that anyone would be interested,” said Desh Valcin, founder of Chase & Papi, the innovative dog-centric event company that produces the pageant.

When Valcin finally did hold the first pageant, last year, in Brooklyn, it was immediately clear people were interested; the event attracted 300 applications that were eventually narrowed down to 12 contestants, along with hundreds of show attendees and a great feature spread in The New York Times.

“It will now be our annual event,” Valcin conceded. 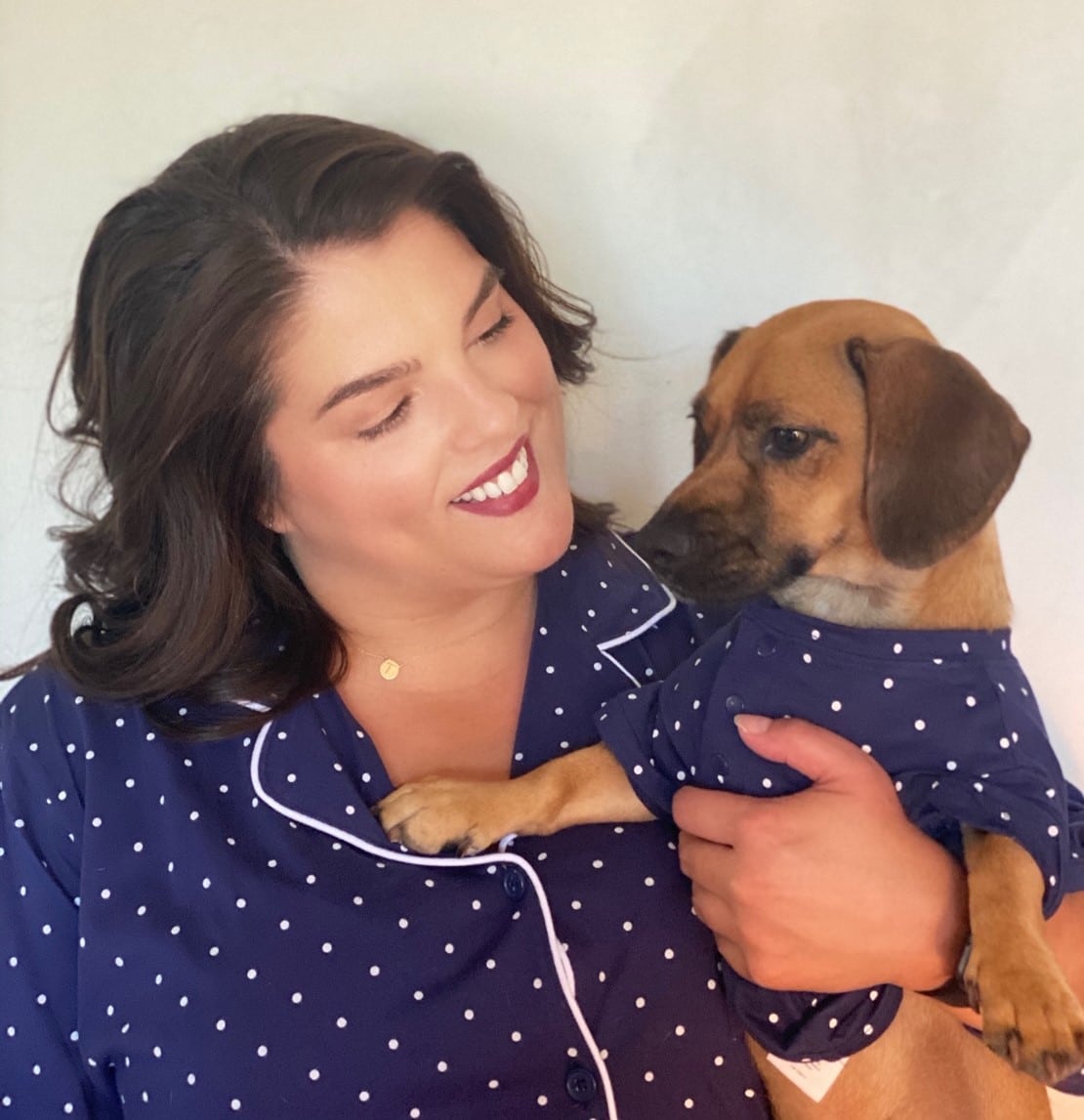 Talia Page and Harvey in matching PJs for the People’s Choice portion of the pageant that the Facebook audience voted on live while the show aired. Courtesy of Talia Page.

Because of COVID-19, this year’s contest had to pivot from an in-person event to a virtual one that was previously taped. Out of the 65 entrants who applied this year, 12 contestants were chosen. However, four dropped out due to COVID-related issues, leaving eight contestants to compete for the title.

To be eligible, contestants must live in the U.S. and be at least 21 years old. Their dogs must be at least 8 months old to ensure they are vaccinated and bonded with their human, according to Samantha Mistretta, assistant pageant director. Dogs can be any breed, must be in good health, and cannot show any aggressive traits. All the contestants compete for their animal charity of choice.

Some people may have a predisposition about pageants and the typical contestant, but Miss Dog Mom “is a unique opportunity to show that is not the case,” Mistretta said. “Our pageant is open to women from all walks of life, and we can make it fun so that you can do it with your best friend—your dog.” 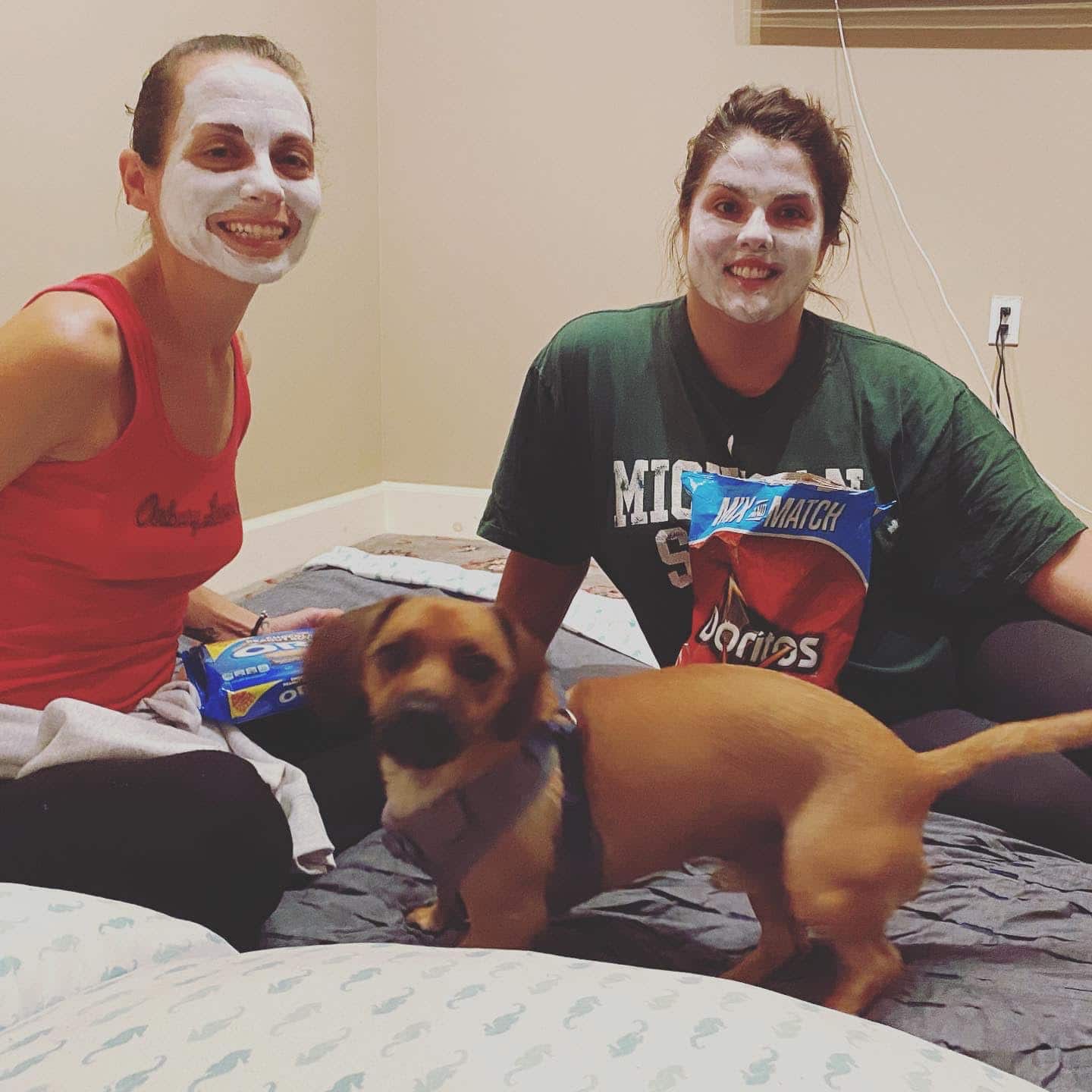 Talia Page, right, with friend, makeup artist, and stylist Stephanie Vazquez in face masks at a sleepover the night before filming the pageant. Chris Spiegel

A pageant was probably the last thing on Page’s mind when she moved from her hometown outside of Detroit, Michigan to New York City 18 years ago to attend law school. She currently is the global director of learning and development for Reprise Digital Media, a marketing company.

Page grew up with a dog but had not had one for some time. When she adopted Harvey, a 2-year-old Dachshund mix, from foster organization Muddy Paws Rescue, the Miss Dog Mom pageant was nowhere on her radar. In fact, she didn’t even know about it. Since Harvey was so new to her home, he hadn’t sniffed it out either.

A new job and working from home prompted Page to think about adopting a dog.

It was Harvey’s smile that first grabbed Page’s attention when she saw his photo. “I was like, ‘He’s my boy,’” Page said. “I knew it and felt it in my heart. He found me. I felt this was the dog for me because we connected completely and instantly.” Not to mention Harvey was the perfect “huggable” size for Page and her apartment. 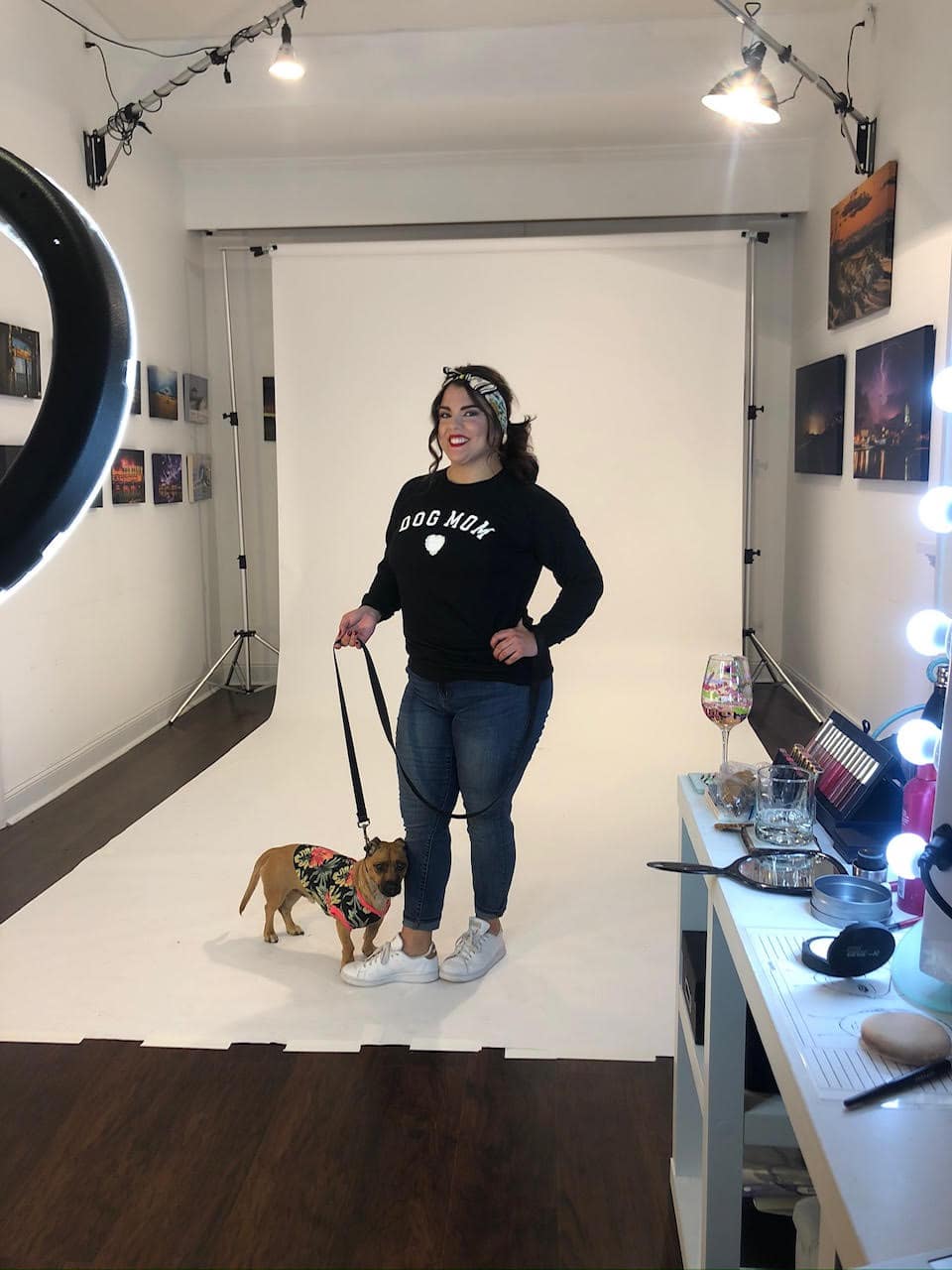 Talia Page and Harvey during the runway challenge segment of the pageant. The theme was “Quarantine Casual.” Stephanie Vazquez

A Big Deal About a Small Dog

As a self-proclaimed woman with “only-child syndrome,” to Page, everything is a big deal. “I can’t just get a dog; I have to GET a dog,” she said, adding that everyone who encounters her knows she has a dog.

That led a friend to forward her the link to the Miss Dog Mom pageant this past July. “I’m also the type of person who will enter every contest and am the first person to volunteer,” Page said. “It was right up my alley and I kind of applied as a joke, not that I thought it was a joke, but I never thought I would be considered. When they emailed me back almost immediately I was shocked. All of a sudden I wanted to be Miss Dog Mom 2020.” 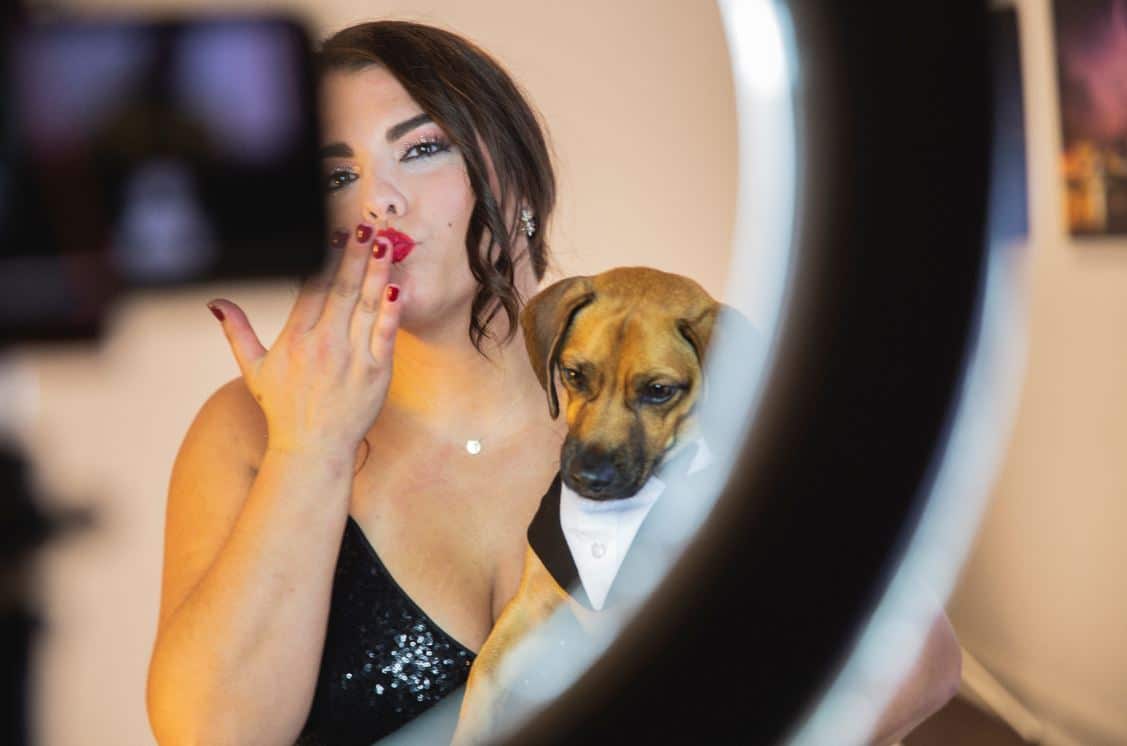 The pageant directors asked Page why she wanted to be Miss Dog Mom. Her answer: She and Harvey both have amazing natural eyebrows. Her response was tongue-in-cheek and funny, plus she added that she spends all her alone time making up songs about Harvey and his wiggly butt.

After that she was invited back for a video interview. Then a week later she received an email announcing she was a finalist for Miss Dog Mom 2020.

“Oh crap, what have I gotten myself into,” she thought at the time. She received a pageant handbook detailing the event and what was expected of her and Harvey. She needed an evening gown (which she finally borrowed from a friend), outfits for Harvey, makeup, and more. And since Harvey can be a bit stubborn, Page worried that he might not want to walk the runway. Thankfully, Page was able to coax him with some tasty treats. “It was only a 10-foot runway at home but I figured if I’m a good sport he would be a good sport,” she said.

Help Is on the Way

As it got closer to the day of the pageant, Page began to realize that she needed some help; it wasn’t going to be as easy as she thought. She enlisted her good friend Stephanie Vazquez, owner of Beauty Schooled, to do her makeup. Chris Spiegel, Vazquez’s boyfriend and owner of Blur Revision Media Design, helped with photography and lighting. They run their businesses out of Heatseeker Studios in Allenhurst, NJ, which is where they taped Page’s part of the pageant.

There were three categories in which the finalists competed: interview, runway challenge (a theme chosen by the pageant coordinators, which was “Quarantine Casual” this year), and the evening gown competition.

Page thought she and Harvey would do great. “I personally think Harvey is the cutest dog I’ve ever seen but that’s all subjective,” she said. She considers herself a ham who doesn’t mind attention. Plus she is very real. “If that’s not what they were looking for I would not have gotten this far. What you see is what you get. I figured they were at least interested in real contestants, and I don’t have a problem leaving an impression.”

She feels she had an advantage due to her background in public speaking, an ability to think on her toes, and because she’s always ready with something to say.

All For A Good Cause

Due to the virtual nature of the pageant, the only time Page and the other contestants met was during a Zoom meeting dress rehearsal the Friday before the event. Even though Page and the others didn’t actually get to spend time with each other, Page enjoyed hearing about the other charities involved and why contestants had a connection to them.

Page chose Muddy Paws Rescue as her charity because she adopted Harvey from the group and because of the coordinated network of support and services it provides adopters. 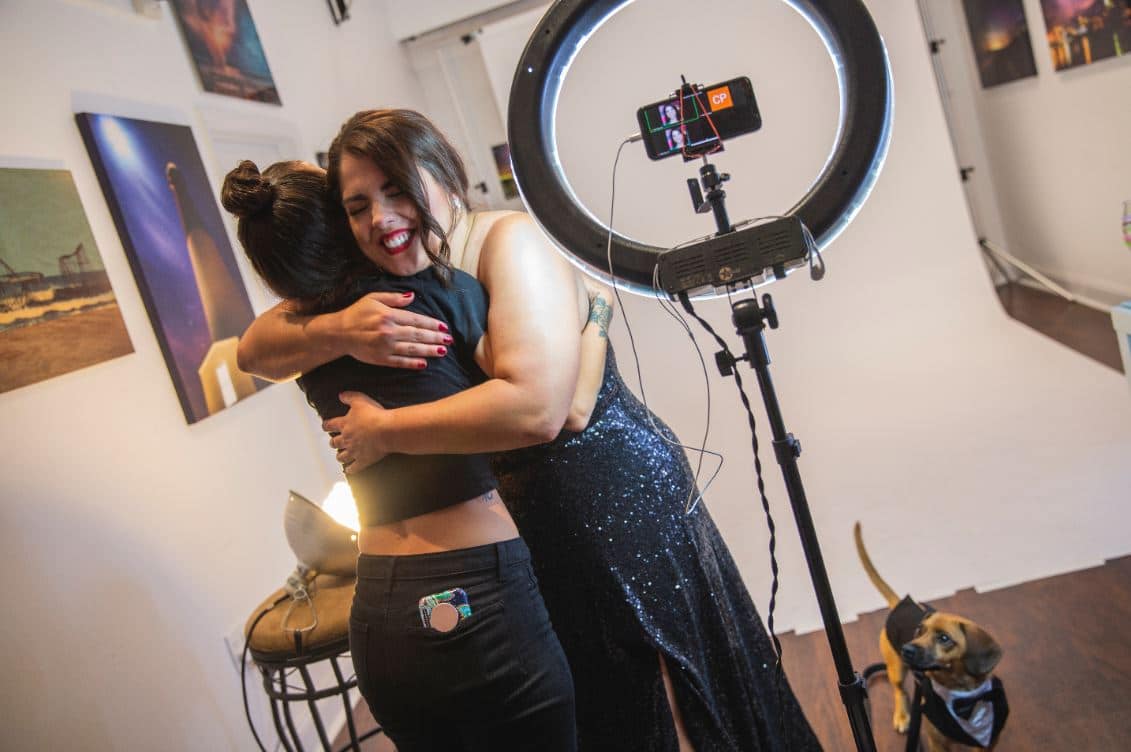 Along with enjoying their pageant prizes, including a three-month supply of Jinx dog food and a photoshoot, Page and Harvey are in for a fun-filled year of events to spread the word on behalf of Muddy Paws Rescue. With her sash, crown, and Harvey in tow, they will make various public appearances to get out the word for their charity.

Page says giving back to help dogs will be easy. She feels lucky that she adopted Harvey and brought him into her life. “Dogs are like angels on earth,” she said. “I feel that they’re pure love and that they see you not on the surface; they see your heart and that is beautiful to me.”

“I live alone and I’m single and don’t have any family in New York City, and it’s just so comforting to have this dog in my home who loves me unconditionally,” Page said. “He’s my partner now. He’s my buddy. We do everything together. There’s just something so magical that dogs bring to their owners.”

And together Page and Harvey will spread the good word about Miss Dog Mom and the wonders of rescue dogs. 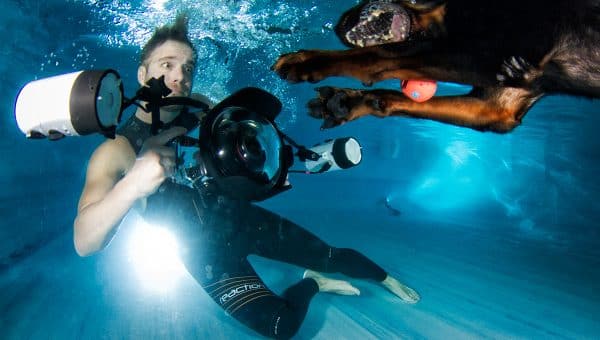