The last time I spoke with Michael Baines, he was in Chonburi, Thailand driving to work and stopping to feed the approximately 80 stray dogs along his route. And me? I was on the phone with him in the States as he told me about the 17 stops in three locations where he would feed and care for the dogs.

In Thailand dogs are typically seen as nothing more than an unwanted nuisance. They roam freely in the streets and people see them as throwaways and often dump them. Baines carried a bottle of poison antidote with him on his daily jaunt because poisoning dogs is not uncommon in Thailand and he wanted to be prepared.

He’d been doing that for five years when I first wrote about him for The Dodo after seeing a video of him rescuing animals. 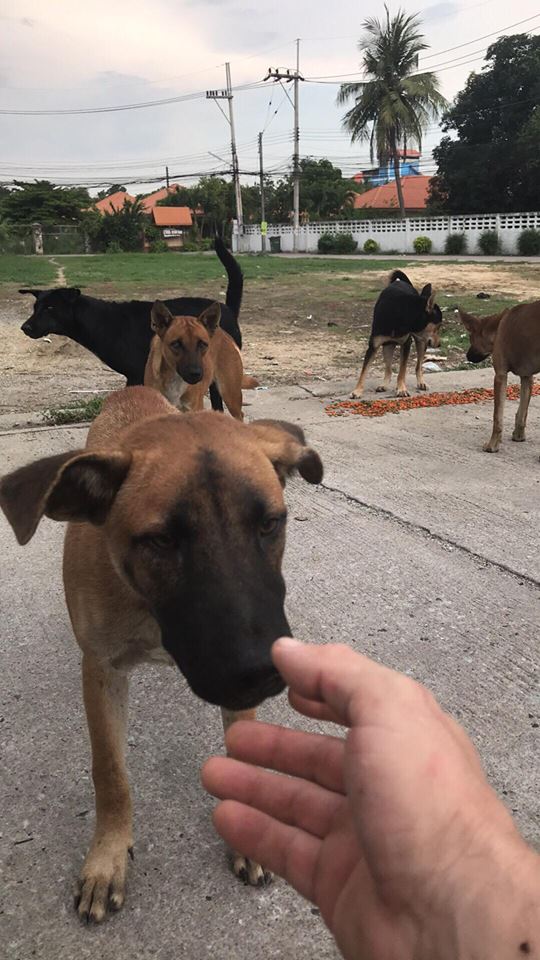 Baines, who was raised in Sweden, made his home in Thailand in 2002 after many vacations there. He’s the chef and general manager of restaurant Carrot in Chonburi, but he began rescue work years ago when he owned a restaurant. There, he met a female dog who had recently had puppies. She was in bad shape and in desperate need of help. Baines started to care for and feed her. He’s never looked back.

Since my first story on Baines went viral in April 2016, he’s saved a lot of dogs. After the story ran, “We got more followers on my page and also more donations,” Baines said, adding that they were mostly from Sweden (Michael’s homeland) and the U.S. “Me and my partner decided to move to the next step and rent a house so we could rescue more dogs, and then I hired a staff.”

Baines didn’t have much room for dogs prior to that. He had 12 of his own pets and couldn’t bring any more home, though he had a room above his restaurant where he took dogs when he could. 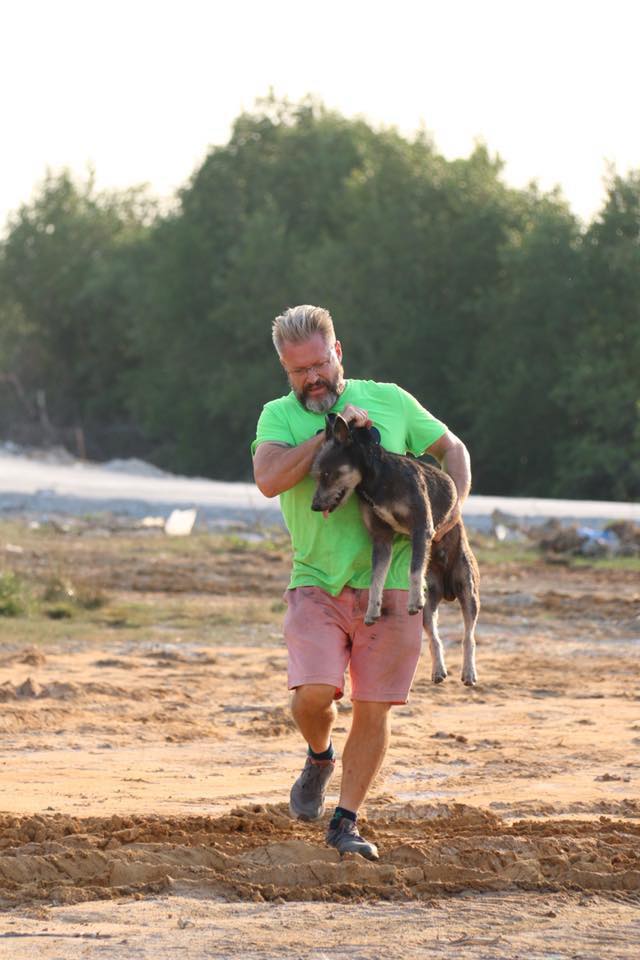 With the rented house, Baines was able to take in dogs from the street who were in dire need, such as a dog who had two broken legs, older dogs and sick dogs. It didn’t take long to have a full house. “In the first six months we went from zero to 80, not counting the stray dogs on the street who we fed,” he said.

A Partnership to Help More Dogs

About a year later in April 2017, Baines took over the Saensuk dog pound from the local government. The dogs in the existing facility only had concrete floors, and they were sick, malnourished, and overall in bad shape. Baines is friendly with the mayor and used the relationship to discuss running the pound.

“I just told them I want to get involved and they said yes,” Baines said. He planned for an extension of the facility and began to raise money. By August 2017, the extension was underway and Baines sent two of his staff to be there daily until he was able to fully take over. In the meantime, he took 30 dogs with severe medical conditions to a veterinary clinic. 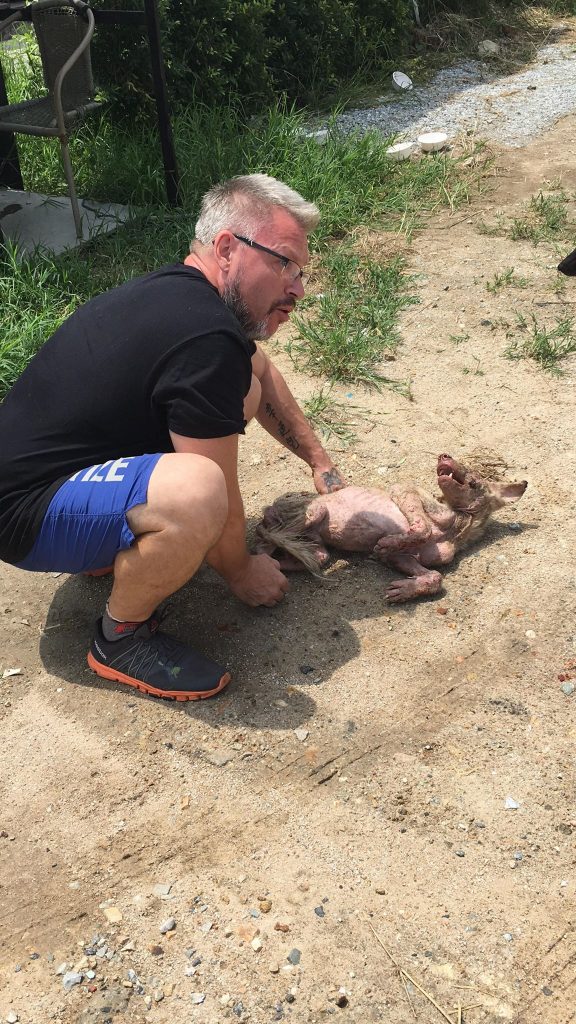 The shelter project is still ongoing, but it has a new foster area and there are eight quarantine rooms to help stop the spread of disease.

A Dog with Cancer Gets a Chance

One of the dogs Baines saved recently was Mickey, who was found roaming the streets in October 2017. Mickey was extremely sick and had cancer all over his body. “He had no fur and the cancer was blocking his eyesight,” Baines said. “Some people asked me to put him to sleep after I rescued him and we wouldn’t do it. I don’t listen to people like that.”

After medication, good food, and chemotherapy, Mickey survived and is doing well. He is about 3 years old and ready for a permanent family. 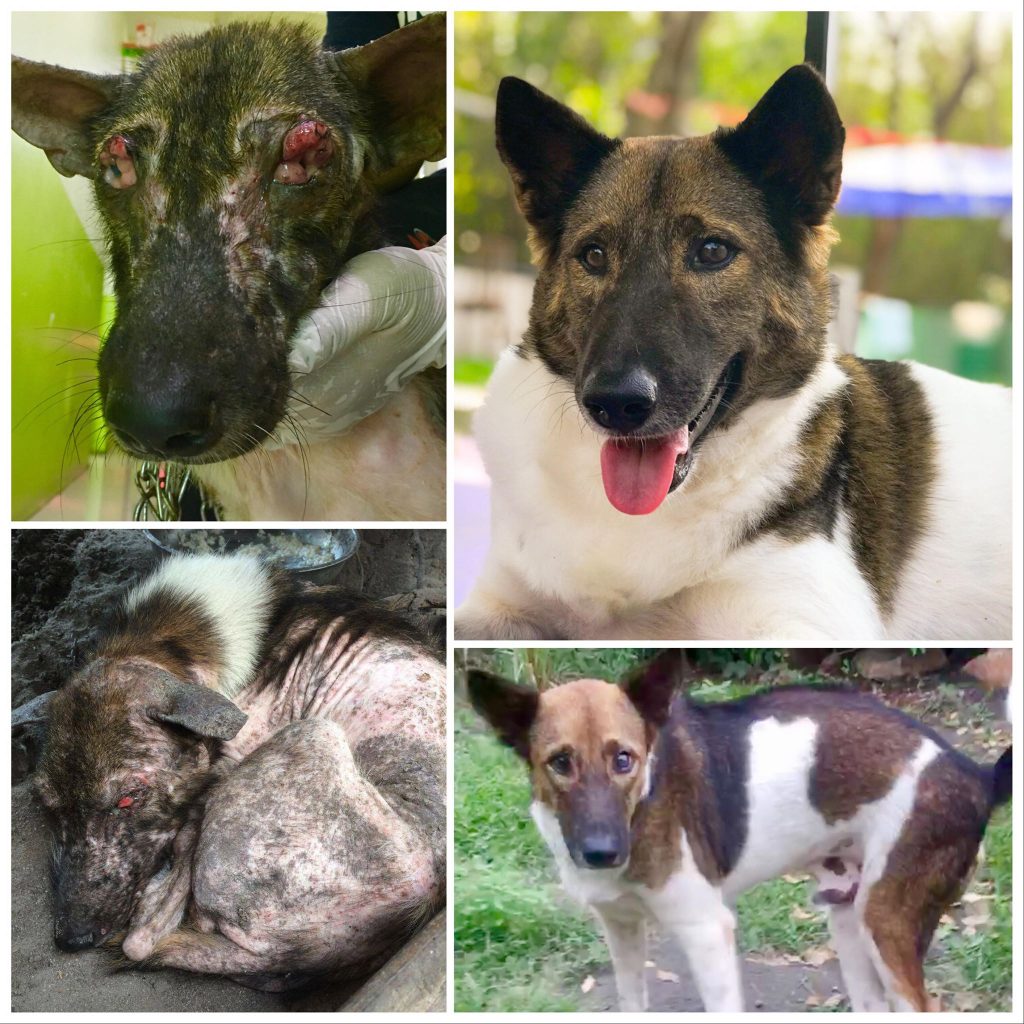 Baines’s rescue is now caring for 360 dogs along with the 100 street dogs that he and staff continue to feed and provide services for daily. His staff consists of 10 members who rescue animals, take care of the shelter, and handle the daily tasks that come with caring for hundreds of animals.

A Trip to the States and a Reunion

Baines recently visited the U.S. to meet with Milo, a dog he rescued in Thailand who eventually found his forever home in Sedona, Arizona.

Living on the streets near a university in Thailand, Milo was in very bad shape when students found him in October 2016. Milo had been dumped and had a severe case of demodectic mange. Baines saw him and believed that with some love and care, he could be a healthy, happy dog. It took 70 days to cure Milo and he finally started to grow fur. “One of my followers saw him on my page and fell in love and wanted to adopt him and he went to Sedona.” You can watch Milo’s rescue on Facebook. 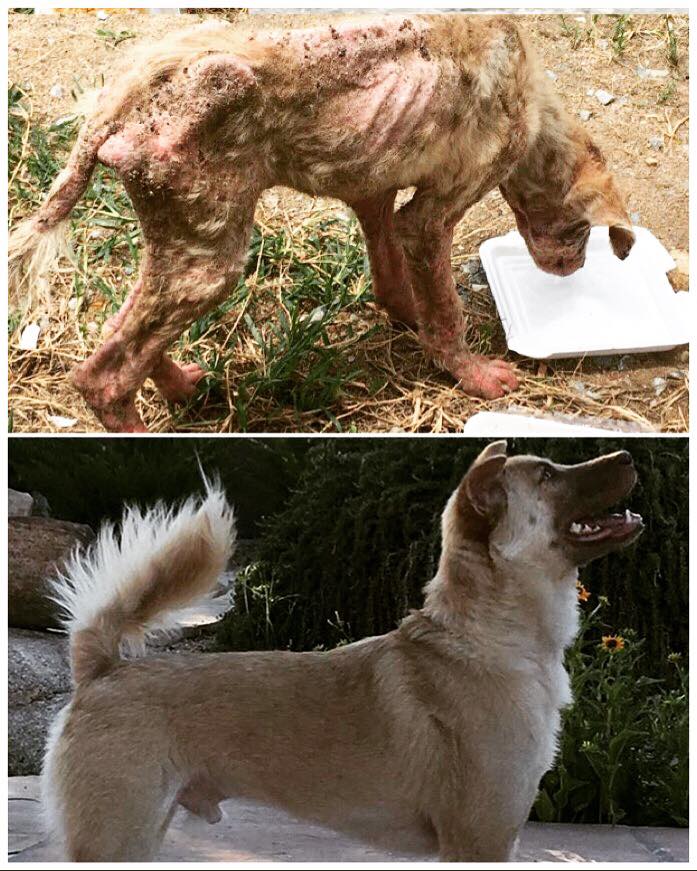 Milo’s adopted family recently needed a dog sitter as they were going on vacation. “They posted it on Facebook and people said, ‘Michael, you have to go.’” So, Baines planned his own vacation around Milo.

“It was my first vacation in six years,” Baines said. His trip included New York, Florida, Las Vegas, Arizona, San Francisco and Los Angeles. “I’ve been meeting followers, visiting dog shelters and people on the streets,” he said. “It’s been very interesting and a good trip.” 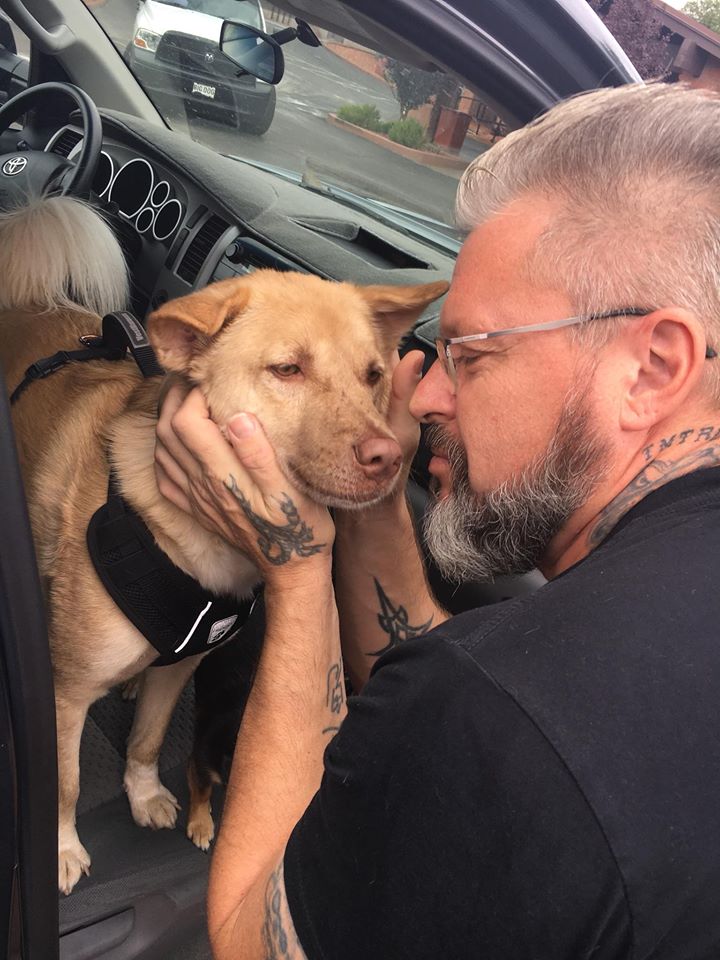 And this writer was finally able to meet Baines in New York City, his first stop. I then followed him on Facebook on his adventures while he met roughly 20 other followers along the way. 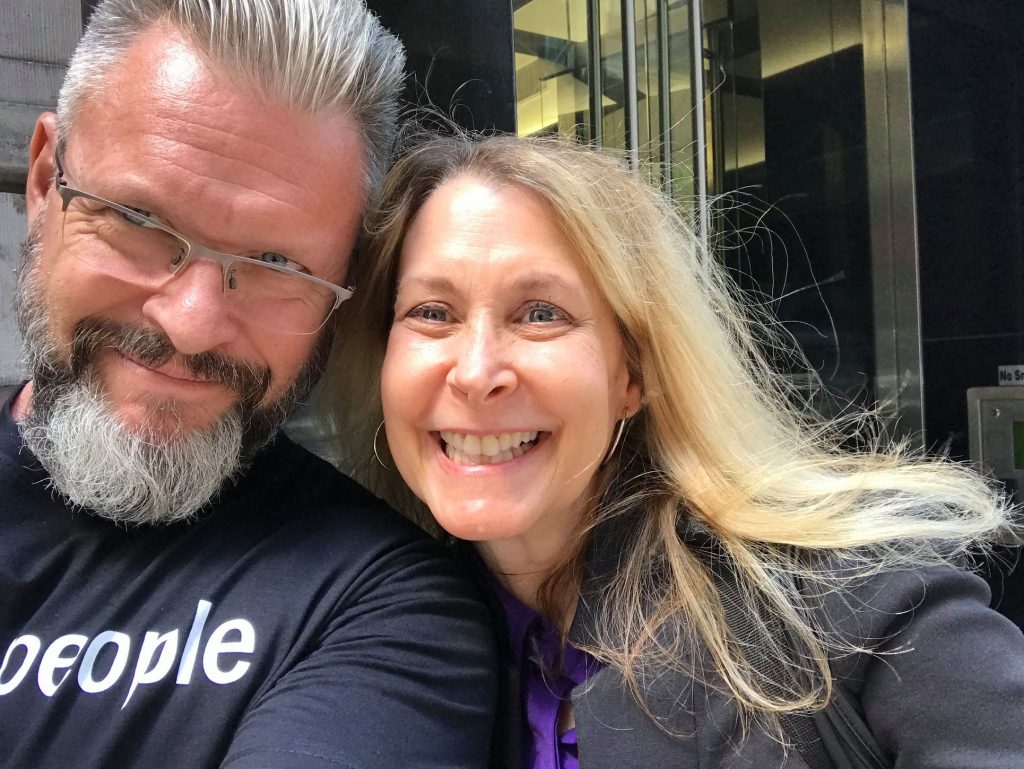 He’s Not Done Yet

Although things have come a very long way over the past couple years for Baines and the stray dogs he helps, Baines isn’t done yet. “I would like to hire a veterinarian, which would cut my costs in half,” he said. He also wants to extend the shelter into the forest and fence it in so the dogs have more space.

The next step would be to open a vet clinic downtown. Locals and visitors could use it for their pets and it would bring in money for the rescue dogs. That’s critical, as his organization runs entirely on donations, which can be inconsistent. “A clinic would also help support the organization,” he said.

As Baines’ organization has grown, so has the responsibility. “The dogs depend on us,” he said. Rescue organizations need to be run as a company, and a plan has to be in place with money put aside. “People need to know you exist. If you don’t do anything, your organization will die and the dogs will suffer.” 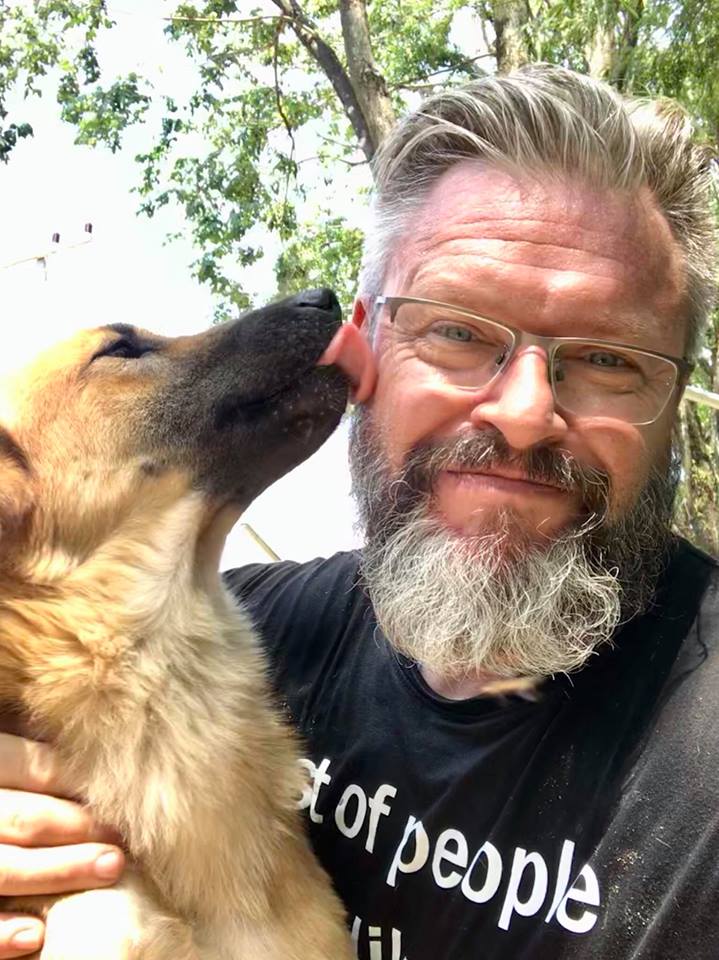 While many people refer to him as a hero, he sees it differently. “Maybe I am a hero, but I don’t feel like it,” he said. “I’m just a regular guy [and] that’s what I do: I rescue dogs.”

To find out more or to donate, visit The Man That Rescues Dogs on Facebook, or visit the website.