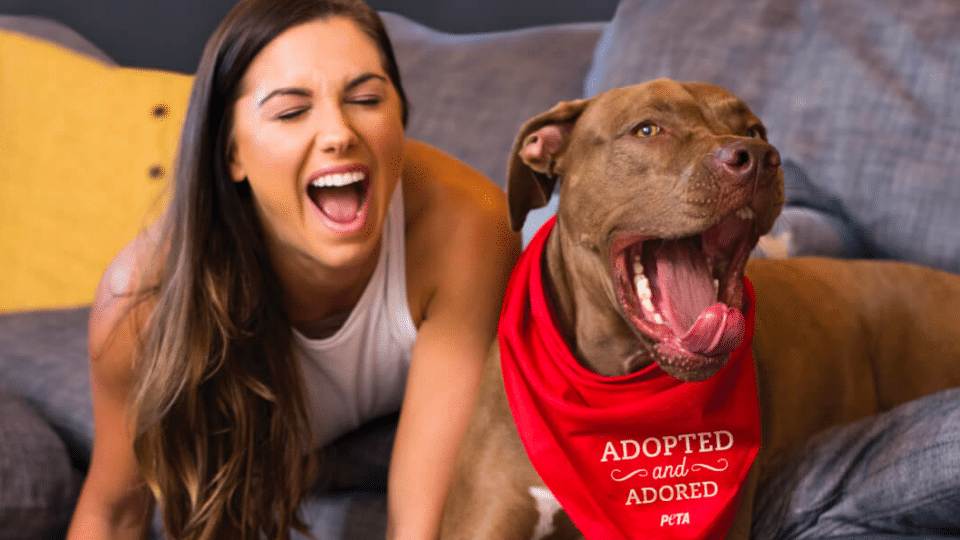 We’re still riding the high on the US Women’s National Soccer Team’s incredible World Cup win. While the players return home to some well-deserved rest and relaxation, we wanted to know who they would be spending their time with. Turns out, many of the players are serious animal lovers with cats and dogs of their own.

Put on your fan jersey (but do they make them in pet sizes??) and check out your favorite player’s cute pets.

“Mommmmm stop embarrassing me. Fine I’ll look at the damn camera…” (What I think goes through his mind anyway 🤷🏼‍♀️) Day in the life on @instagram

Forward Alex Morgan clearly adores her dog, Blue. She posts about him on Instagram frequently, celebrating his birthday with a dog-friendly cake and calling him her family. Morgan is a big advocate of dog adoption (and is a practicing vegan.) Blue even features in a recent ad spot that Morgan did with PETA. In the accompanying video, Morgan says, “we’re not owners—if anything, he owns us.”

Whenever forward Christen Press is home, she’s probably cuddling with her adopted dog Morena. Press is also an avid supporter of dog rescues.

We’re not sure what goalkeeper Adrianna Franch’s cats’ names are, but it’s clear there’s a lot of love between them. How cute are the grey cat’s little paws?

Defender Tierna Davidson recently told Teen Vogue that missing Harley is one of the hardest parts of traveling.

The look like…. “get that camera out my face”📸😍 #zara #lioness

What a cute cat! Defender Crystal Dunn told Newsday in 2018 that she made a point of going home to see her cat, Zara, whenever possible.

Our sweet sweet angel princess babe got adopted today! Brooky girl, you were the brightest ray of sunshine in our lives this season. We ❤️ you and are so happy for you (but also sobbing our eyes out). #adoptdontshop #mcspca

Defender Kelley O’Hara is a fierce advocate of dog adoption. Her foster pup, Brooklyn, was a major focus on her social media in 2017. She celebrated Brooklyn’s adoption on Instagram.

Defender Becky Sauerbrunn loves cats so much that “cat lover” is on both her Twitter and Instagram handles. She clearly adores these two kitties, too.

Midfielder Morgan Brian has the sweetest Dachshund, Tanner. We don’t know much about this cutie, but we are having fun imagining him running around the soccer field after her.

Midfielder Rose Lavelle posts almost as much about her English bulldog, Wilma, as she does about soccer. She’s so devoted to her dog that she uses an app to dole out treats when she’s away from home, she told the Washington Post. Bonus: she writes hilarious tweets about being a dog lover. And about her dog, of course!

Many of those tweets feature videos and photos of Wilma, too. Awwww.

When midfielder Allie Long isn’t on the green, she’s probably playing video games with her pets underfoot. The pups sometimes get her in trouble when she’s traveling with teammates, according to ESPN. It’s a good thing they’re so cute!

Seeing these athletes’ love for their pets gives us yet another reason to love them. We can’t wait to see the posts about being reunited with their pets. They’ve gotta be on the way.

Last but not least—who watches the dogs when they’re traveling? Because we know a lot of dog lovers who’d jump at the chance to help out! Just sayin’.