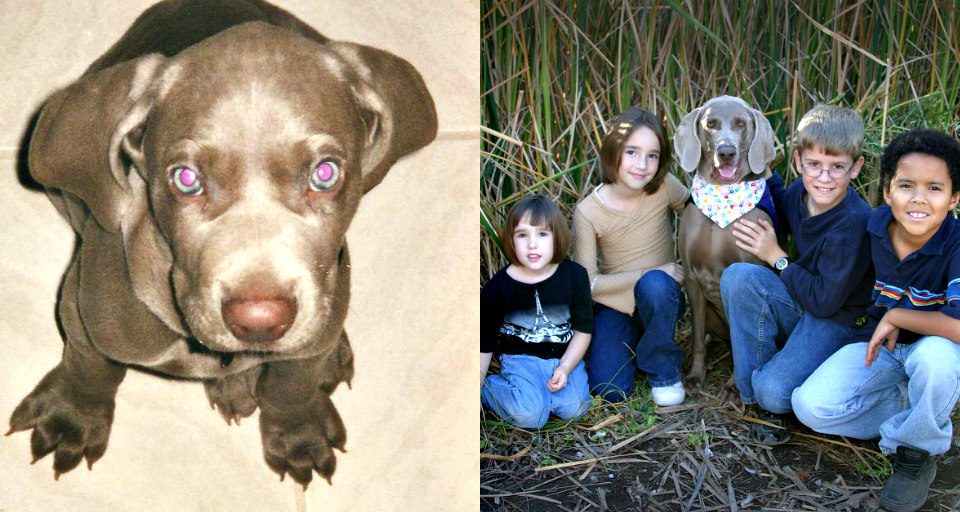 After years of working in corporate America and traveling for business, Pam Gaber decided there was more to life and resigned. She began volunteering at Crisis Nursery in Phoenix (now Child Crisis Arizona), a safe haven for children of abuse and neglect who are 10 years old and under. She also decided it was time to bring a dog back into her life to fill the “hole in her heart.”

On Jan 1, 1999, she chose the only male out of nine Weimaraner puppies. “He was so calm and so squishy,” Gaber said. “I got him because in 30 seconds he displayed such an amazing temperament. I brought him home and began the love affair with my soul dog.” 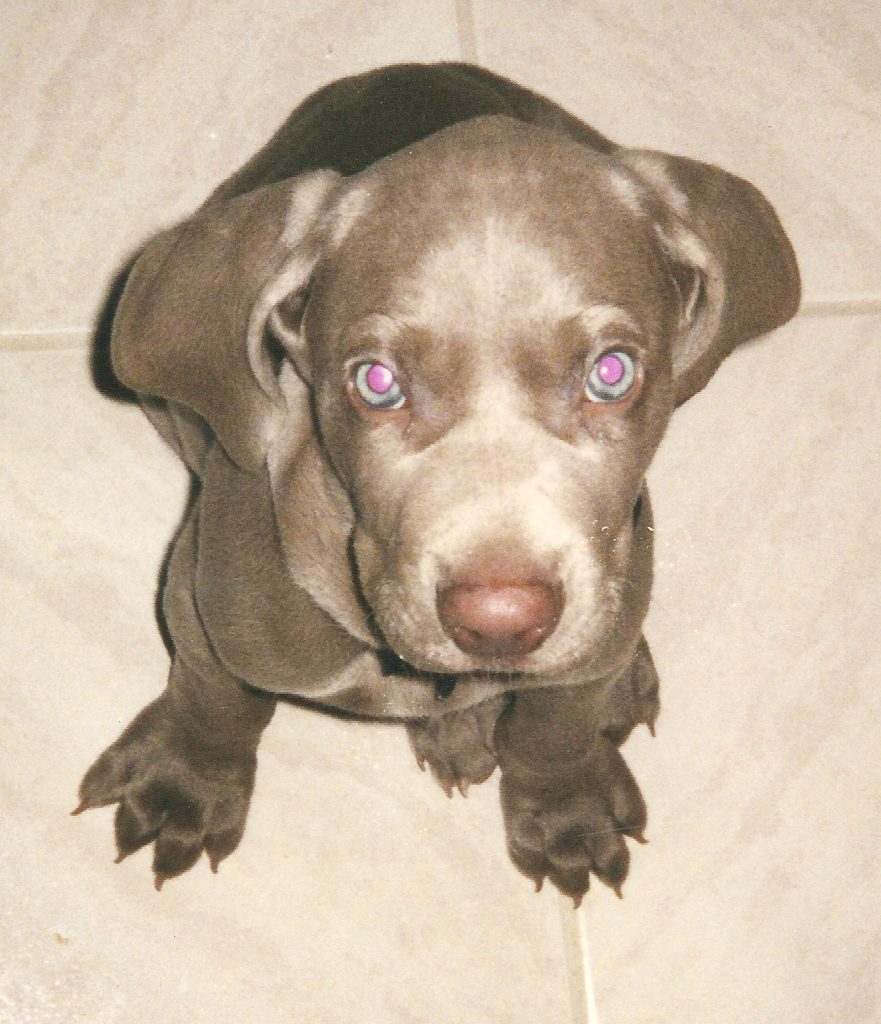 The following Friday she told the children at Crisis Nursery about the new puppy she named Gabriel. Every Friday thereafter, the children would ask about Gabriel, and the answers would spark excitement and curiosity.

One week, the children ran up to Gaber and asked when Gabriel had misbehaved. “Gabriel ate his bed,” she said. One little boy asked, “Did you hit him?”

Gaber told him no. “We don’t solve problems in our house with violence.”

“These children were bonding with an animal they never met,” Gaber said. 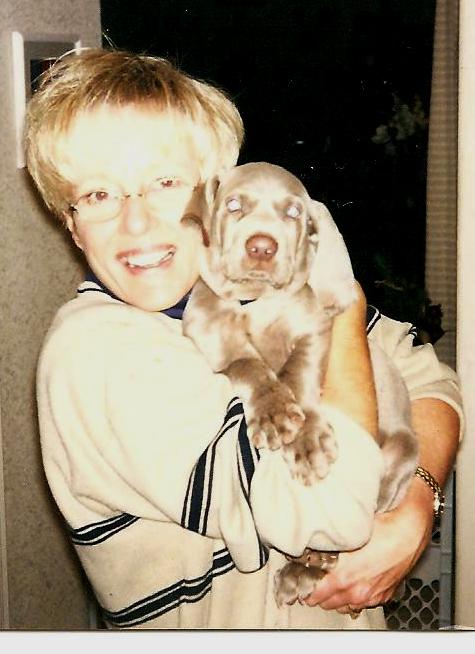 Hope After the Holidays

By December of 1999, Gaber asked the CEO of Crisis Nursey if she could bring Gabriel to the annual holiday party. Although the CEO didn’t say yes, she didn’t say no either. Gabriel, almost one year old at the time, came dressed as Rudolph the Red-Nosed Reindeer wearing antlers, a Rudolph T-shirt and a jingle-bell collar. “When I walked in the nursery with him the children’s eyes were wide open,” Gaber said. “For a moment I think they thought I really brought a reindeer.”

Gabriel had never been around children before but remained his usual calm self. The children rushed toward him and hugged him, petting his velvety ears and placing them on their cheeks. “I felt I was watching a gentle gray dog reaching children like no adult could.” 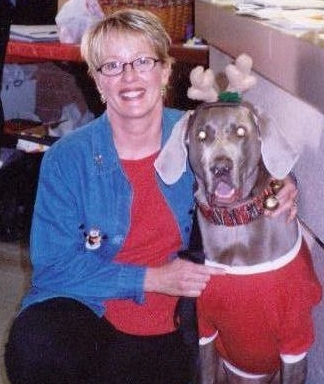 One boy who had just come to Crisis from an abusive and neglectful home had yet to come out of his room or stop crying. However, when Gabriel arrived, he peeked around the corner to look. The boy walked out, his face swollen and tear-stained, put his arms around Gabriel’s neck, nuzzled his fur, and his tears dried.

Then the CEO of Crisis Nursery said to Gaber, “I don’t know what happened here today, but would you bring Gabriel back?”

There were therapy dogs at hospitals and nursing homes, but there were no groups to be found that visited children in crisis, Gaber realized. “I thought I could do nothing or I could do something,” she said. “I saw such a change in those children and knew there was a need and knew it wasn’t being filled.” 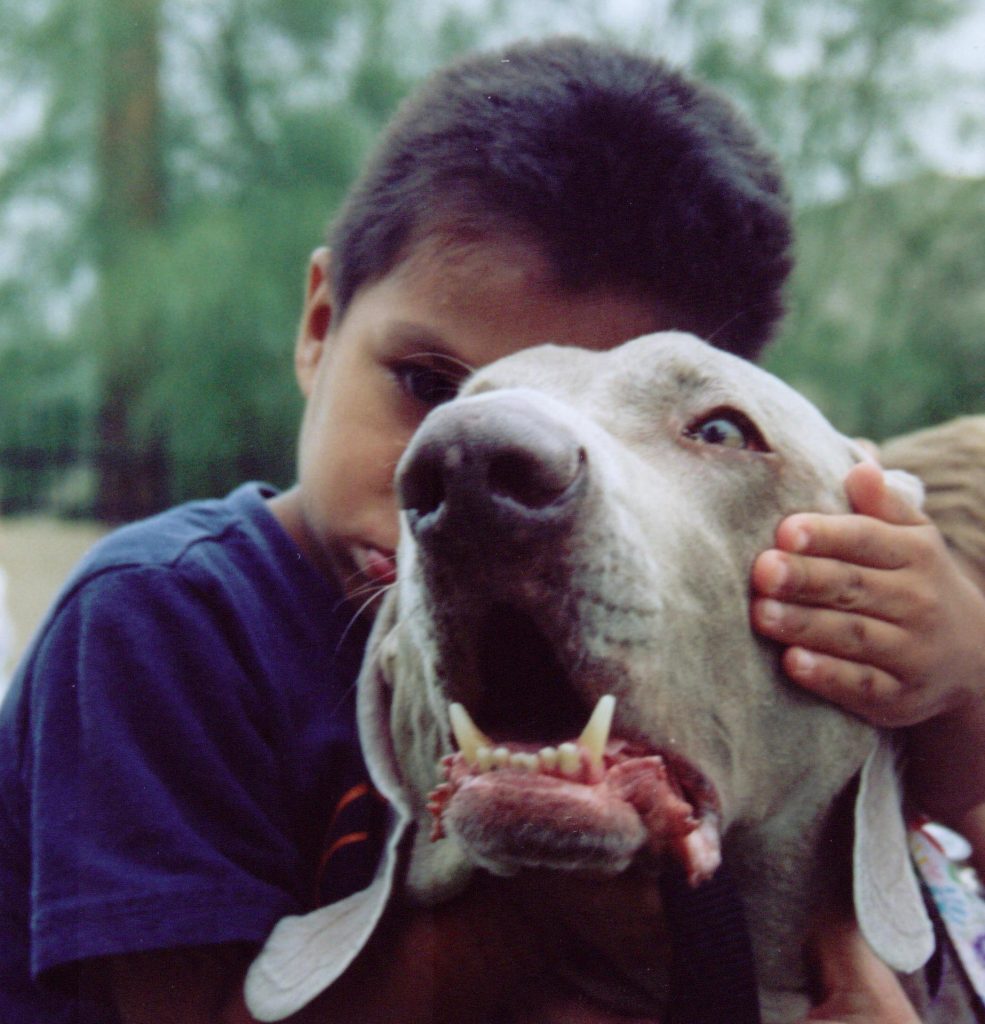 She started by getting Gabriel registered as a therapy dog. Soon, neighborhood friends wanted to help and register their own dogs. By September 2000 there were three therapy teams working at Crisis Nursery. Then the local paper featured Gabriel on the front page, and even more people took an interest. By May of 2000, Gabriel’s Angels had 501(c)(3) status, and further articles and TV spots brought increased awareness. 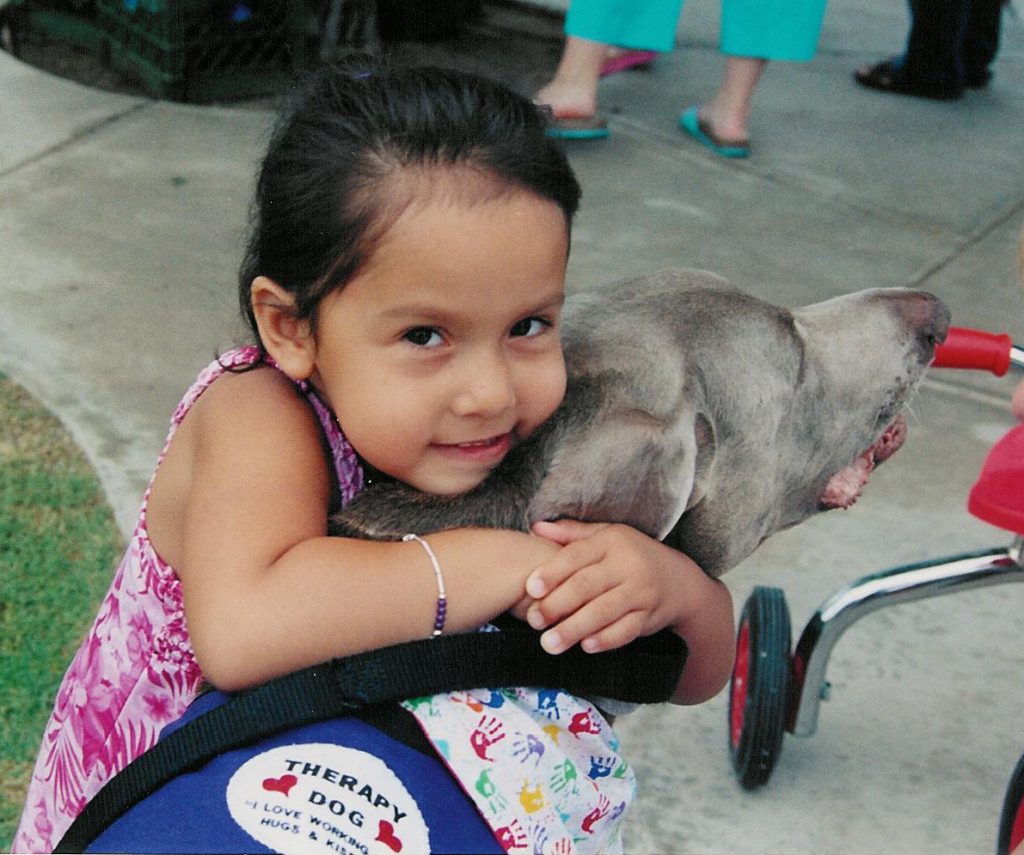 Gabriel’s Angels grew and quickly had 40 therapy teams while Gaber built a small board of directors. Realizing she couldn’t do it alone, she threw a small fundraiser. That success enabled the hiring of a part-time contractor to set up systems, administrative help, and later a volunteer coordinator. All the therapy dogs wore purple vests, and volunteers wore Gabriel Angel’s shirts with a logo. “We had to get it set up as a business,” she said.

Now, Gabriel’s Angels works to develop important core behaviors such as forming a healthy attachment with the therapy dog; developing empathy, a learned skill that vulnerable children traditionally lack; creating compassion; self-regulation; affiliation (how to join a group and interact); and tolerance. “All these behaviors are known to be necessary to be successful in life,” Gaber said. “Our whole program is a behavioral-based model. The dogs are the teachers.” 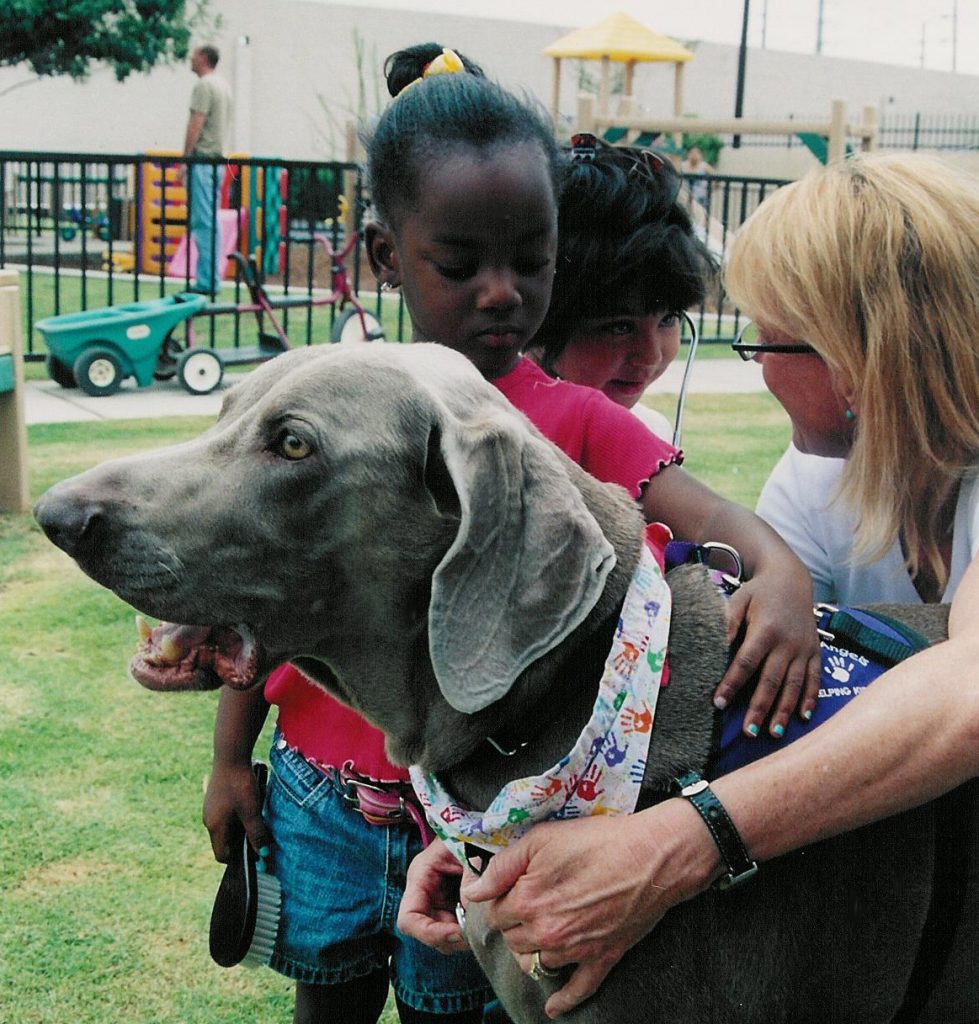 Since its inception, Gabriel’s Angels has reached 120,000 children. The organization has been doing formal program evaluation since 2003. “The true greatness of a nonprofit is how well we’re meeting our mission,” Gaber said, adding that they have 15 years of data showing that “we indeed are impacting these core behaviors.” 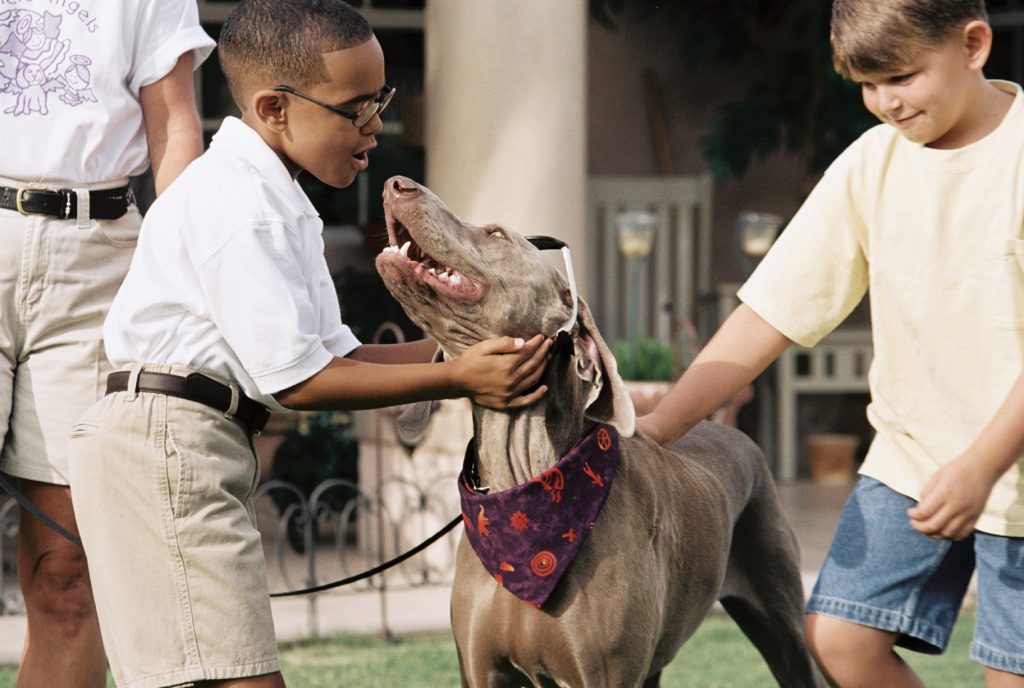 Currently, Gabriel’s Angels has 185 teams that reach 15,400 kids a year from north-central Arizona down to Tucson.

How and Why it Works

Animals are in the lives of children from day one, whether it’s a family dog or stuffed animal or books about teddy bears. “It’s that special connection between children and animals,” Gaber said. “The present moment where animals and children live in is really that sacred place where they connect.” 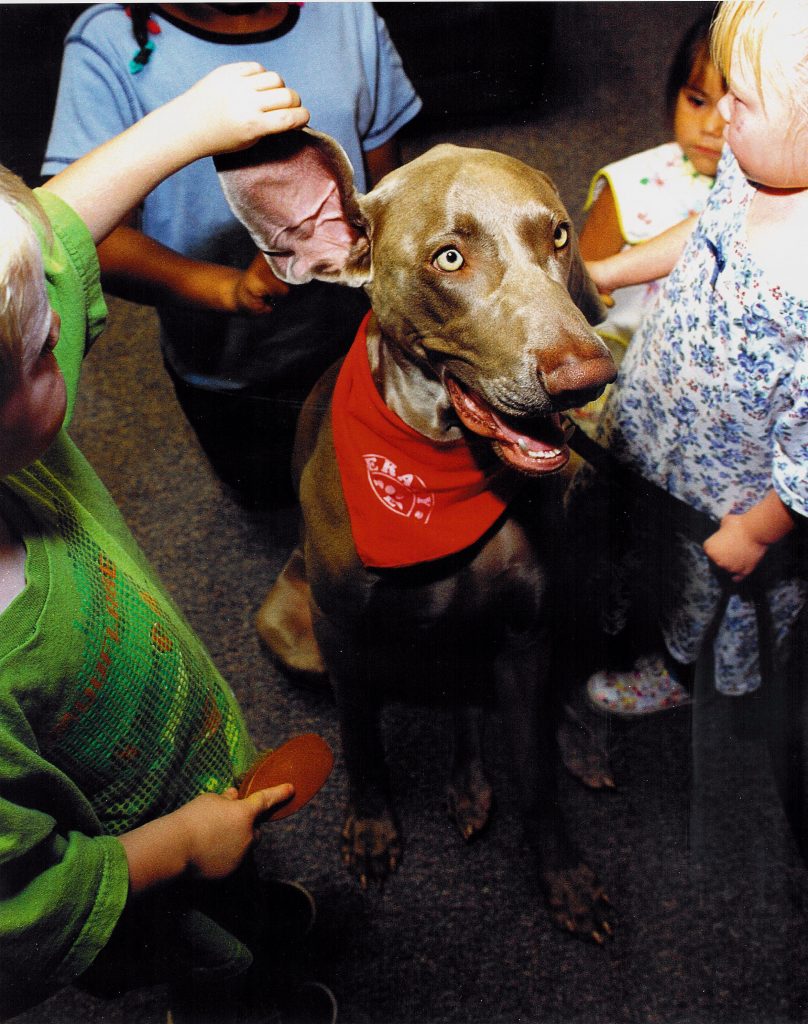 Whenever Gaber would take out Gabriel’s therapy vest, he would see it and start spinning in circles. “He knew he would be visiting those kids so I always knew he enjoyed it,” Gaber said. When Gabriel had his vest on, he was all business. 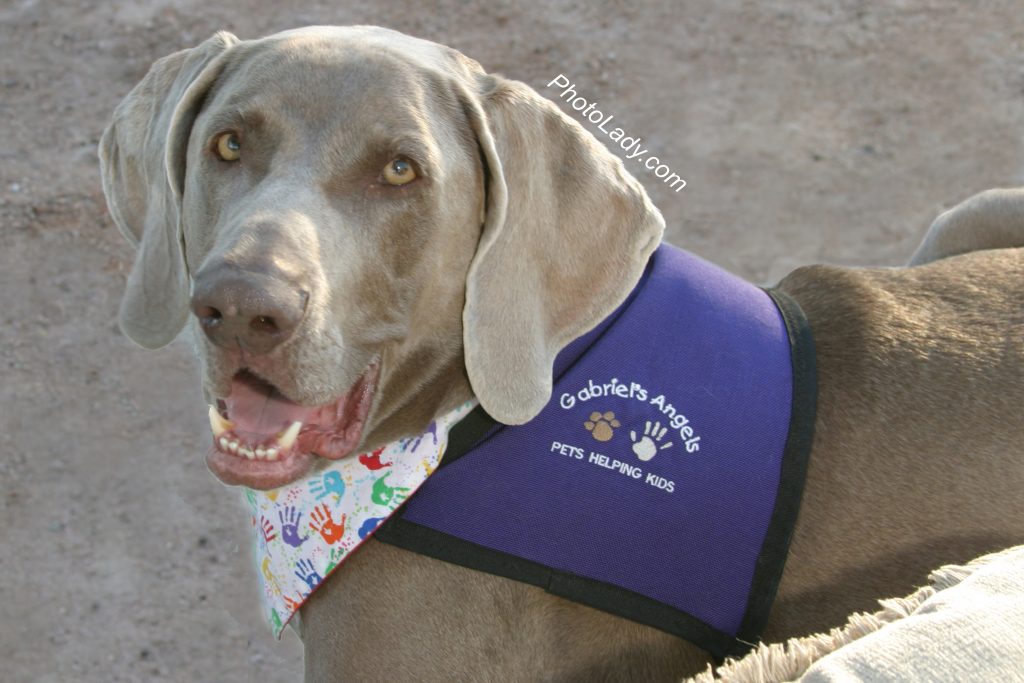 Gabriel was diagnosed with cancer in August of 2009. During his last visit at Crisis Nursery around February of 2010, Gaber noticed he was anxious. He was physically present, but he was not himself. “I looked at him and I said, ‘I’ll get you out of here.’” Gabriel didn’t have the strength, and Gaber knew it was time to retire him. 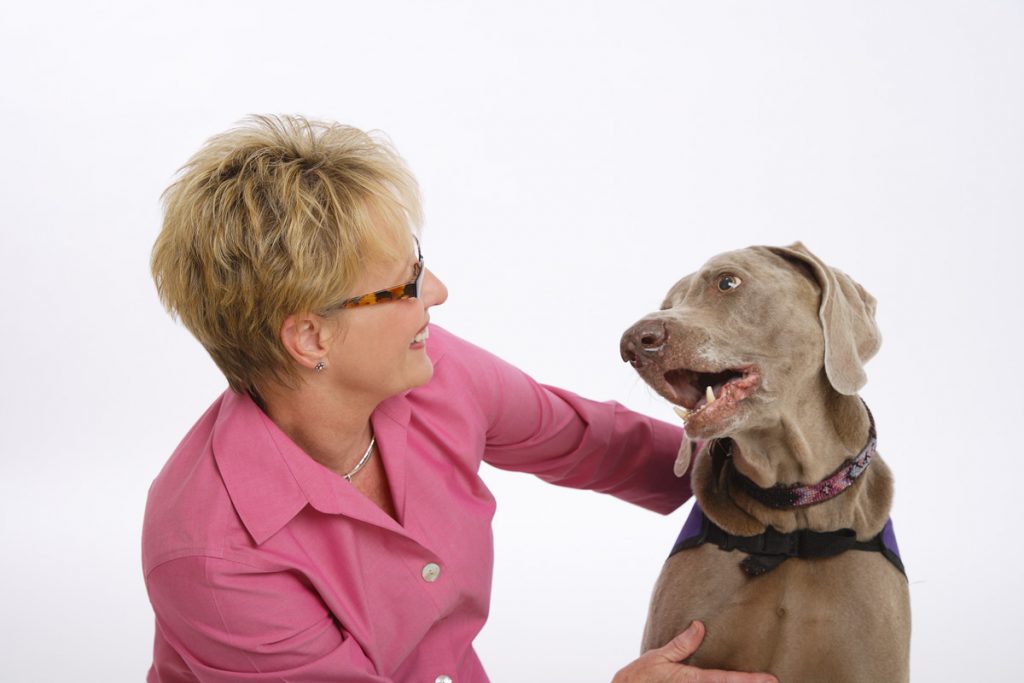 Gabriel underwent chemotherapy, but cancer had metastasized to Gabriel’s lungs. He passed away in May 2010.

“After 18 years, it’s not about me and Gabe,” Gaber said. “I care more about Gabe’s legacy and that we continue to fill a need.”

The Future of Gabriel’s Angels

The organization has two program expansions. One is individual intervention, which works with the most traumatized children, where a therapy dog is written into a treatment plan for a child. The second program is the ABC program (Animals Books and Children) that is in the Title 1 schools for children in poverty where a reading specialist refers a child to Gabriel’s Angels so the child can read to a therapy dog. 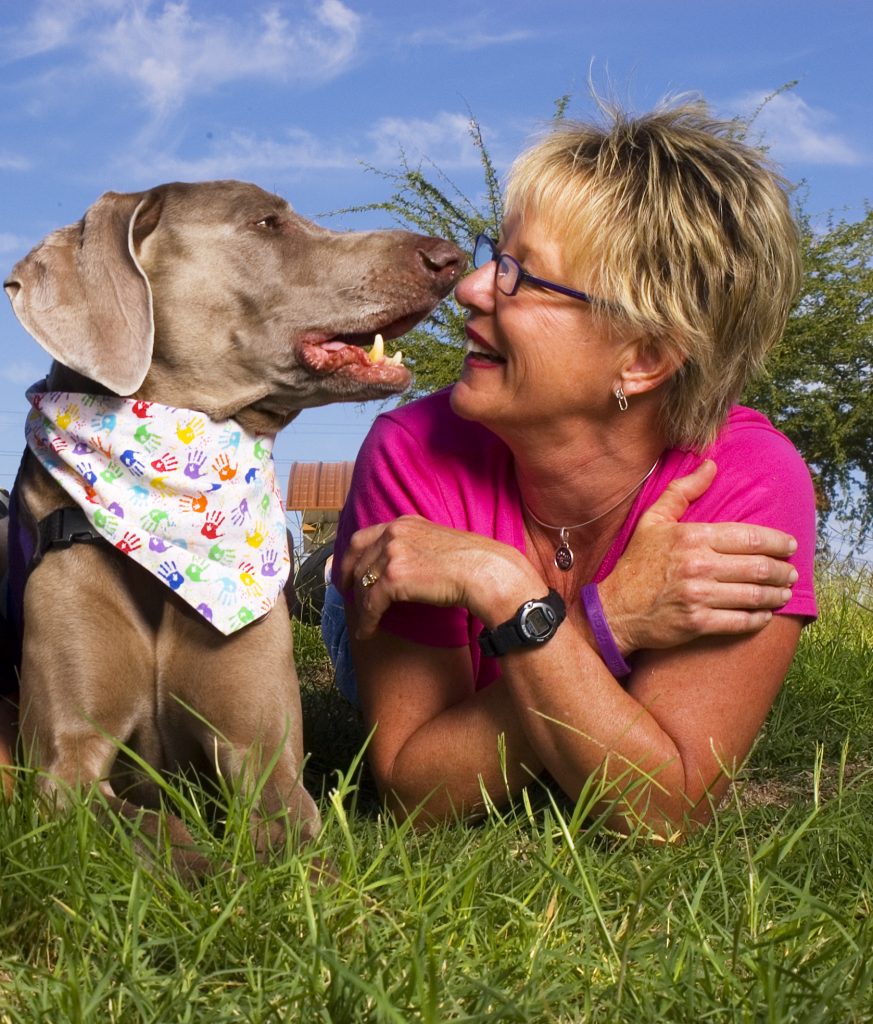 The mission of Gabriel’s Angels is twofold, according to Gaber. One is to help instill core behaviors in children, but the second is equally important: They want to encourage people to volunteer in child abuse cases. “[Gabriel] has inspired these people to help because they can do it with their dog.”

For more information, click Gabriel’s Angels. For information on therapy dogs, click on Pet Partners and Alliance of Therapy Dogs.