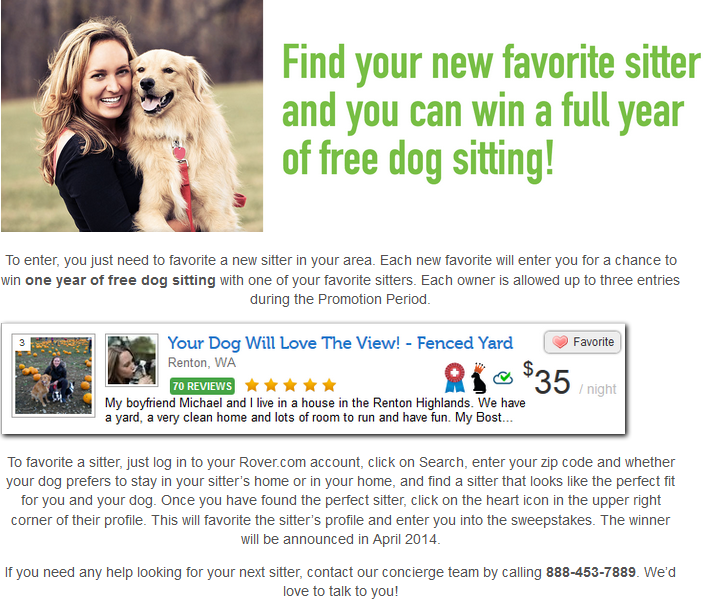 NO PURCHASE NECESSARY TO ENTER OR WIN. A PURCHASE OR PAYMENT OF ANY KIND WILL NOT INCREASE YOUR CHANCE OF WINNING.

VOID WHERE PROHIBITED BY LAW.

1.    ELIGIBILITY. The 2013 Rover Favorite Sitter Sweepstakes Promotion (the “Promotion”) is open only to registered Rover dog owners (“Owners”) who are legal residents of the United States, 18 years of age or older at the time of entry, who have received an authorized Notice to Enter (as defined below) from Sponsor. Officers, directors, employees, contractors, representatives and agents of A Place for Rover, Inc. (“Sponsor”), and each of their respective immediate families and household members are not eligible to enter this Promotion. Participation constitutes entrant’s full and unconditional agreement to these Official Rules.

3.    HOW TO ENTER.  Prior to or during the Promotion Period, Rover will send a written notification (a “Notice to Enter”) to certain Owners who have had a Rover dog sitter (a “Sitter”) the Owner previously booked with deactivate from Rover.com. In order to enter the Promotion, an Owner who receives a Notice to Enter must sign in to his or her Rover.com account, navigate to the profile page of a Sitter other than one who has deactivated from Rover.com, and “favorite” that Sitter by clicking on the “♥ Favorite” button in the upper right corner of the Sitter’s profile page. Only three (3) entries per Rover.com account during the Promotion Period will be accepted, and each such entry must “favorite” a different Sitter. Entries generated by a script, macro or other mechanical or automated means, and entries submitted outside the Promotion Period will be disqualified. In the event of a dispute regarding any entry, the entry will be deemed made by, and any prize for the entry will be awarded to, the authorized Rover.com account holder. *** To learn how to Favorite sitters, please see below.

4.    PRIZES: One (1) prize will be awarded. The prize shall consist of one (1) free year of dog boarding booked through Rover.com, up to a total retail value of one thousand dollars ($1,000.00) (the “Prize”). The Prize may only be redeemed in exchange for services booked through Rover.com with Sitters that were “favorited” by winner when entering the Promotion. Total prize value for the Promotion is U.S. $1,000.00. The Prize cannot be substituted, exchanged or transferred, except that Sponsor reserves the right, in its sole discretion, to substitute a prize of equal or greater value. All federal, state and local taxes and any costs related to participating in the Promotion and claiming or using the Prize are the sole responsibility of the winner. Winner may be required to complete an IRS Form W-9 and may receive an IRS Form 1099-Misc.

7.    WAIVER OF LIABILITY/PUBLICITY RELEASE.  By participating in the Promotion and submitting an entry, each entrant agrees to (i) be bound by these Official Rules, including all entry requirements, and (ii) waive any and all claims against Sponsor, affiliated companies, subsidiaries, and their respective officers, directors, employees, agents, licensees, and representatives (collectively, “Released Parties”) for any injury, damage or loss that may occur, directly or indirectly, in whole or in part, from the participation in the Promotion or from the receipt or use of any prize. By entering this Promotion, each entrant gives his or her express permission to be contacted by the Sponsor by e-mail for Promotion purposes. Acceptance of a Prize constitutes permission to the Sponsor to use Winner’s names and/or likeness and public profile information for advertising, editorial, and publicity purposes, without further compensation, except where prohibited by law.

8.    DISCLAIMER OF WARRANTIES. Sponsor is not responsible for any misdirected, lost, late, inaccurate or incomplete entries, and such entries will be void. Sponsor is not responsible for: (a) any computer, telephone, cable, network, satellite, electronic or Internet hardware or software malfunctions, failures, connections, availability, (b) garbled or jumbled transmissions, (c) service provider/Internet/web site/use net accessibility or availability, traffic congestion, (d) unauthorized human intervention or (e) the incorrect or inaccurate capture of entry information or the failure to capture any such information. Sponsor makes no warranties, express or implied, regarding the Promotion or the Prize, and to the extent allowable under law, fully disclaims all such warranties. Entrants and winner assume all damages from participation in the Promotion or use of the Prize, and waive all claims against Sponsor or any Released Parties arising therefrom.

9.    GENERAL CONDITIONS. This Promotion is subject to all applicable federal, state, and local laws and regulations. The laws of the State of Washington govern this Promotion without reference to choice of law principles.  Any dispute regarding the Promotion is exclusively subject to binding arbitration (with one (1) arbitrator sitting) in Seattle, Washington pursuant to the commercial arbitration rules of the American Arbitration Association.  Entrants hereby irrevocably waive any and all right to a trial by jury in any legal proceeding arising out of or relating to the Promotion.  Entrants further waive any objection to venue in Seattle, Washington, whether such objection is based on lack of personal jurisdiction, improper venue, forum non conveniens, or the like.

10.    SPONSOR; PRIZE WINNER IDENTIFICATION. The Sponsor of this Promotion is A Place for Rover, Inc., 318 1st Ave S., Suite 310; Seattle, WA 98104. An identification of the winner of the Prize will be available by written request to Sponsor at the foregoing address.

11.    FTC DISCLOSURE RULES.  Winner is required to comply with the FTC’s rules governing online endorsements or any similar rules when posting online reviews or comments regarding the Sponsor or its services.