Chances are you’ve seen the iconic painting of dogs playing poker somewhere—or everywhere (certainly in the United States!). Maybe your favorite watering hole has a reproduction hung over the bar. Your dog-loving coworker might have one in postcard form on their fridge or emblazoned on their mug of choice. You could have glimpsed it on Cheers or The Simpsons or spotted the homage in a Snoop Dogg music video. If you’re particularly eagle-eyed, you might have caught the split-second reference in Pixar’s Up. 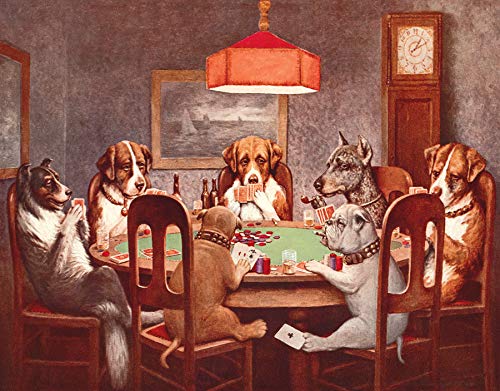 This painting is all over pop culture and is pretty much as recognizable as something by Michaelangelo or Caravaggio, but its origins are humble. Check out these nine surprising facts about this dog-inspired work of art.

It’s most likely you’ve seen “A Friend in Need,” the most popular version of this painting (featuring a circle of dogs engaged in a duplicitous poker game). It was painted in 1903 and is by far the most ubiquitous of the pieces, but Cassius Marcellus Coolidge actually painted 18 of these images between 1894 and 1910.

While the series is mostly known as “Dogs Playing Poker,” and all the paintings do feature anthropomorphic canines, each painting has a title that reflects its subject matter. 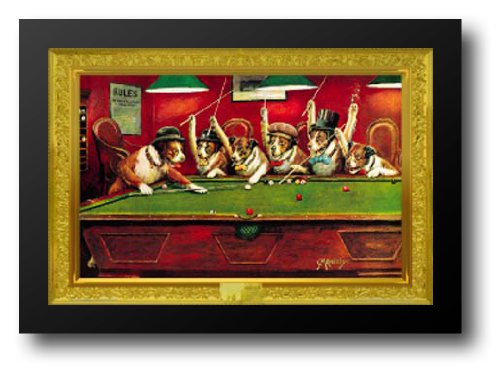 2. The painter wasn’t just a painter

Chances are you’ve never heard of Cassius Marcellus Coolidge (who was born in 1844), even though you’ve definitely encountered his work.

His career was full of surprising leaps. He was a pharmacist, cartoonist, art teacher, street sign painter, and entrepreneur. He founded a bank and newspaper, and he’s even credited with the creation of comic foregrounds—the life-size 2D caricatures often spotted at fairs and amusement parks that allow a fairgoer’s face to peep through as if part of the scene.

He even tried his hand at writing—a comic opera about mosquitos. 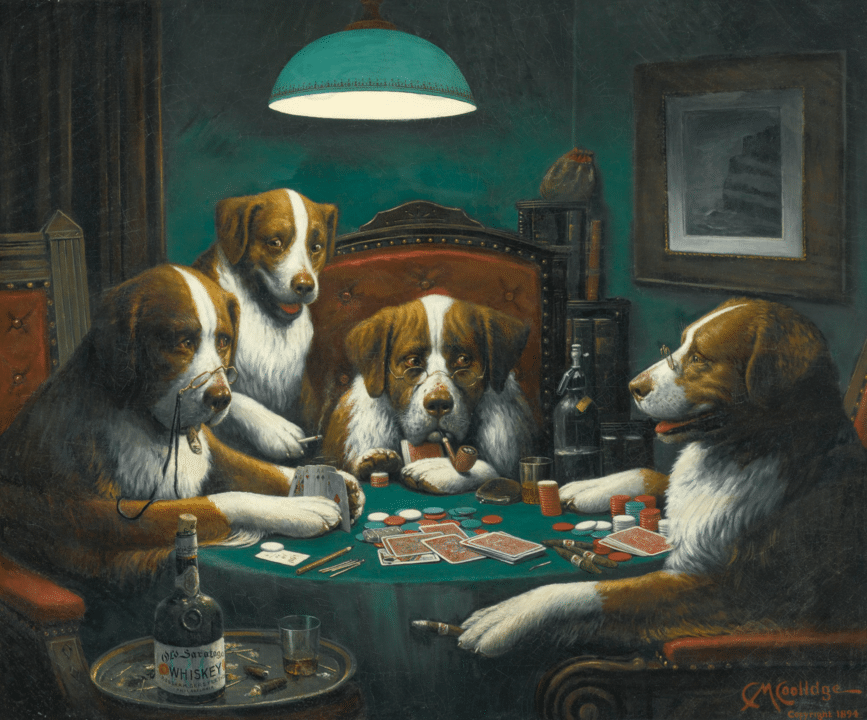 3. Most of the series was commissioned to advertise cigars

While dogs at a card table don’t necessarily seem like the perfect fit for a cigar company, Coolidge’s earliest paintings of dogs were used on cigar boxes, and the “Dogs Playing Poker” series was actually commissioned by the Brown & Bigelow publishing house to use for calendars, posters, and print ads for cigars.

4. A lot of the paintings don’t actually feature poker

While all of the paintings in the series include dogs partaking in human activities, only eleven include poker games.

The others feature ballroom dancing, baseball, car trouble, and a football, among other settings. What they have in common are comically arranged bulldogs, St. Bernards, and other recognizable breeds engaged in decidedly human activities.

5. The painter never really became famous for his work

Cassius Marcellus Coolidge was relatively unknown during his life despite his success—in fact, when he died in 1934, his obituary read, “He painted many pictures of dogs.”

But his paintings of dogs playing poker were distributed widely during his life, bled into public consciousness, and eventually began to inspire imitations and appear elsewhere in pop culture.

6. The paintings are a quintessential example of kitsch

Nowadays these paintings are some of the defining images of the kitsch or schlock genre—encapsulating the tackiness and charmingly mundane scenes of the “low art” movement.

Basically, kitsch is garish, sentimental art designed to appear tasteless (or include a fun visual gag) without challenging viewers to think critically. It’s the potato chip of the art world—lacking in nutrition, but people love the salty crunch—and it’s largely looked down upon by fine artists and art historians because of its more lowbrow appeal. 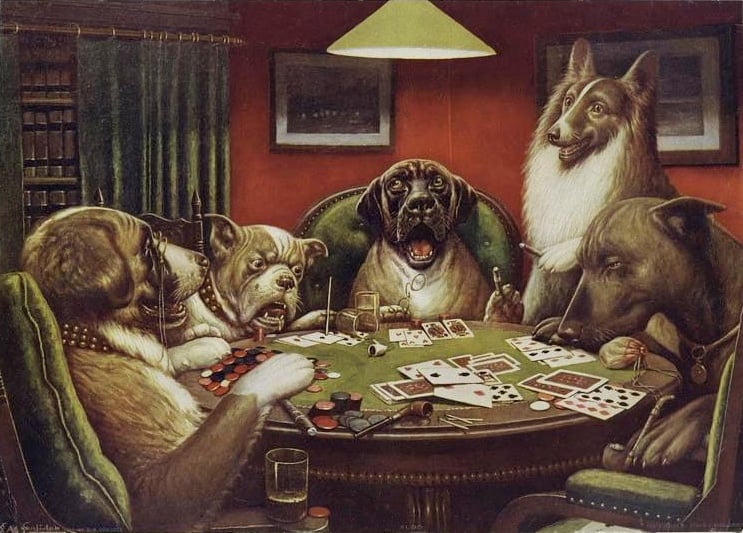 The series is pretty universally regarded as, well, bad. While there’s definitely a lot of life, dimension, and character in the dogs’ faces, actions, body language, and scenery, critics largely view the series as a joke and its status as commissioned advertising material has made it especially maligned.

The series is considered so ridiculous that in 2002, the director of the Chrysler Museum of Art in Virginia (home of pieces by Mark Rothko, Jackson Pollock, Andy Warhol, and many other giants of the art world) announced via press release that he was trying to acquire the series—but it was all an elaborate April Fools prank.

Seriously. In 2005, two of Coolidge’s paintings in the series went up for sale at Doyle New York’s annual Dogs in Art Auction, and they sold for about $600,000, according to art auctioneers at Sotheby’s. The original estimated value before the sale was approximately $30,000.

The two dog paintings, “A Bold Bluff” and “Waterloo: Two,” caused a bidding war and eventually ended up with an anonymous private collector from New York. The poker dog painting, called A Friend in Need, is thought to be worth millions.

These oil paintings have been imitated and referenced by popular culture over and over throughout the years. They’ve popped up on TV shows (Cheers, Roseanne, The Simpsons, That 70s Show), films (The Thomas Crown Affair, multiple Pixar movies), cartoons and comics (including The Far Side), music and music videos (including songs by Snoop Dogg and “Weird Al” Yankovic), video games, halftime ads, and elsewhere.

The images themselves have been reproduced as puzzles, commemorative plates and figurines, toys, T-shirts, tapestries, and even holographic prints. There are imitations of the paintings with cats, Republican presidents, and more.

Though C.M. Coolidge’s series may not be the highest of art, the dogs playing poker series is burned into the American consciousness through repetition, adoration, and the sheer joy of the absurd.