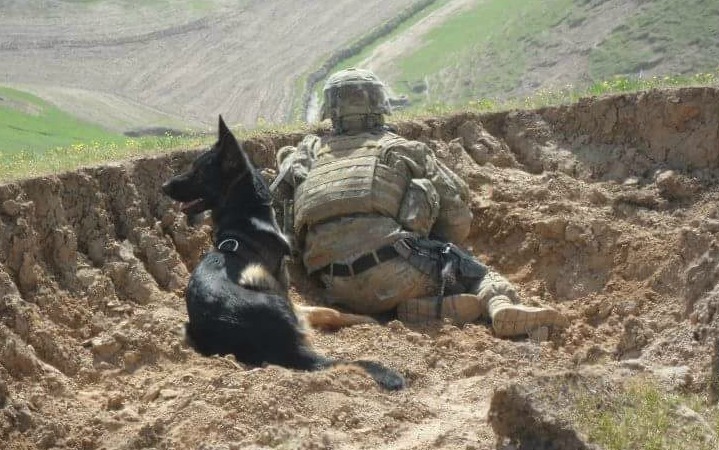 They parachute into compounds. They save hundreds of lives. They find hidden bombs. They’re veterans, and guess what? They’re also dogs.

Canine (K9) Veterans’ Day is March 17, which honors our canine heroes. Though they’ve received more attention in recent years, most of us still don’t know much about them—plus, there has been some controversy about what happens when they retire. We believe they deserve all the attention they can get. (And treats. We’re betting they’re big on treats.) Read on to learn more!

History of Dogs in War

Although the use of dogs in military operations goes back to ancient times, the United States didn’t start using Military Working Dogs (MWDs) until World War II. A group called Dogs for Defense was established after the Pearl Harbor attacks to train dogs to serve in the Army, Navy, and Coast Guard—these dogs were largely donated by owners for military service. More than 10,000 dogs were trained, most returning to their families after undergoing a retraining period to help them adjust to civilian life again.

Fast forward to modern times and MWDs have become an integral part of our armed forces—from sniffing out bombs to guarding bases and checkpoints to patrolling for sabotages, these dogs do whatever is necessary to protect their handlers and their units.

One of the most famous military K9’s is Cairo, who stormed Osama Bin Laden’s compound with Seal Team Six—his role was to help clear the building, search for booby traps, and search for secret areas where Bin Laden could be hiding.

There are currently about 2,500 active MWDs and 700 of those are deployed overseas. 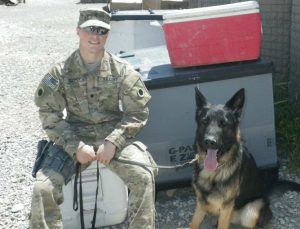 MWDs are trained directly by military personnel at Lackland Air Force Base in San Antonio, Texas. The base even runs their own breeding program. Puppies that don’t fit the temperament test to serve are adopted out. The Army says about half the dogs they train will become serviceable dogs.

The Army didn’t always train all their working dogs. In 2011, they hired subcontractors to help train Tactical Explosive Device Detector (TEDD) dogs. These highly-trained dogs were paired with handlers who volunteered for that role, like Specialist Devin Cooper. His dog, Panter, served a 15-month tour of duty in Afghanistan with Spc. Cooper.

“Panter and I had a really strong bond,” Spc. Cooper says. “We looked out for each other—he was like a brother to me.”

Panter sniffed out two bombs during his tour with Cooper, which Cooper estimates saved as many as 20 lives.

“MWDs are one of the most important assets to the units—the dogs find bombs that would not otherwise be found,” Spc. Cooper says. “They can find them underground, in cars, in houses—you can’t hide explosives from the dog.”

Perhaps not surprisingly, this made dogs and their handlers an enemy target.

“There were bounties for dogs and their handlers,” Spc. Cooper explains.

Day-to-day patrols that could turn into intense firefights at any given moment can start to weigh heavily on humans and K9s alike.

“[The dogs] get used to the walking and the heat, but not so much the firefights,” Spc. Cooper says. “We had seen a good amount of combat—dogs aren’t used to [that] and he got scared a lot. His next handler said he was really skittish.”

The fact the dogs are redeploying with new handlers concerns Spc. Cooper.

“Panter didn’t make it through [his next deployment] because he had signs of PTSD,” Spc. Cooper says. “They should not be deploying with different handlers. If they are given to a handler, the dog should stay with that handler.”

What happens when the dogs are ready to retire from military service? According to the Lackland Base Public Affairs Officer, dogs returning from the battlefield used to be euthanized prior to the November 2000 enactment of Robby’s Law. Robby’s Law requires suitable MWDs be adopted in the following order: by former handlers of the animal, by other persons capable of humanely caring for the animal, and by law enforcement agencies. 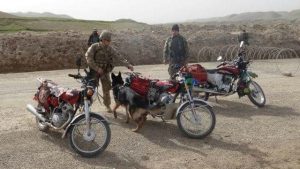 MWDs like Panter save lives by sniffing out explosives soldiers would most likely miss. Photo courtesy of Spc. Cooper.

But adoption priority is not always carried out in that order. The New York Post detailed several handlers’ stories—like Spc. Cooper’s—of getting the runaround when trying to adopt their MWDs upon their retirement.

MWDs trained by K2 Solutions were adopted out at events when their government contract ended in February 2014. The dogs were adopted primarily by law enforcement personnel and civilians—but not by their handlers.

Groups are working to help rectify this situation, including the Justice for TEDD Handlers group founded by Betsy Hampton. Their goal is to make sure these hardworking canine veterans get to stay with their handlers whenever possible.

“Their deployments were rough—these dogs saved lives, some consider the dog their child,” Hampton explains. “Giving their dog up was the hardest thing [the handlers] have ever had to do. The handlers would like to know their dog is okay, possibly get updates and photos, visit them, or ideally, adopt them.”

Some TEDD handlers have been reunited with their dogs, but many more are still looking and hoping.

“Many handlers have PTSD, and so do the dogs,” Hampton says. “Reuniting with their dogs would allow them to heal together.”

How You Can Help

These heroic dogs are a beautiful testament to the bond between soldiers and their canine partners. You can find out more from—and get involved with—fantastic organizations like Warrior Dog Foundation.