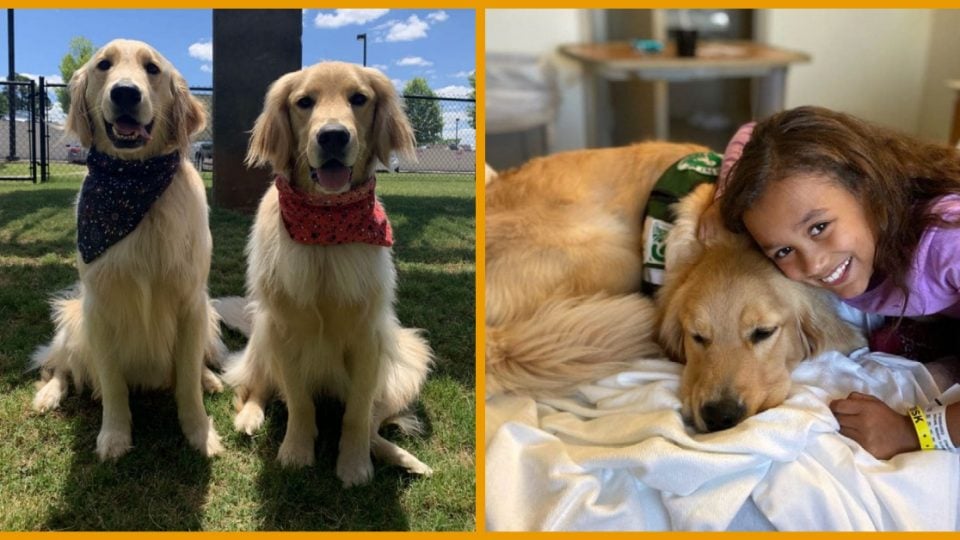 A call went out about the emergency room patient. The boy with cognitive delays felt so afraid that he’d begun physically lashing out at the doctors and nurses trying to help him.

Then a Golden Retriever named Asteroid strode into the room, and everything changed.

The dog lay down on the floor near the child. Her handler, Stefani Williams, watched as the boy decided to walk over to Asteroid and pet her. He pulled his hat off his head and placed it on the dog’s head. It became a game.

When a nurse returned, the boy had no problem taking his medication and cooperating with his medical team. Thanks to Asteroid, he was no longer distraught.

“Two weeks later, he came back for some follow-up imaging, and when we opened his door and went in, his jaw dropped and Asteroid’s tail started wagging,” Williams told The Dog People. “They immediately remembered each other. He took the leash from my hand and they walked to get his imaging done together. His mom told me, ‘It is so reassuring to know that we can come here and it doesn’t have to be traumatic for him.’” 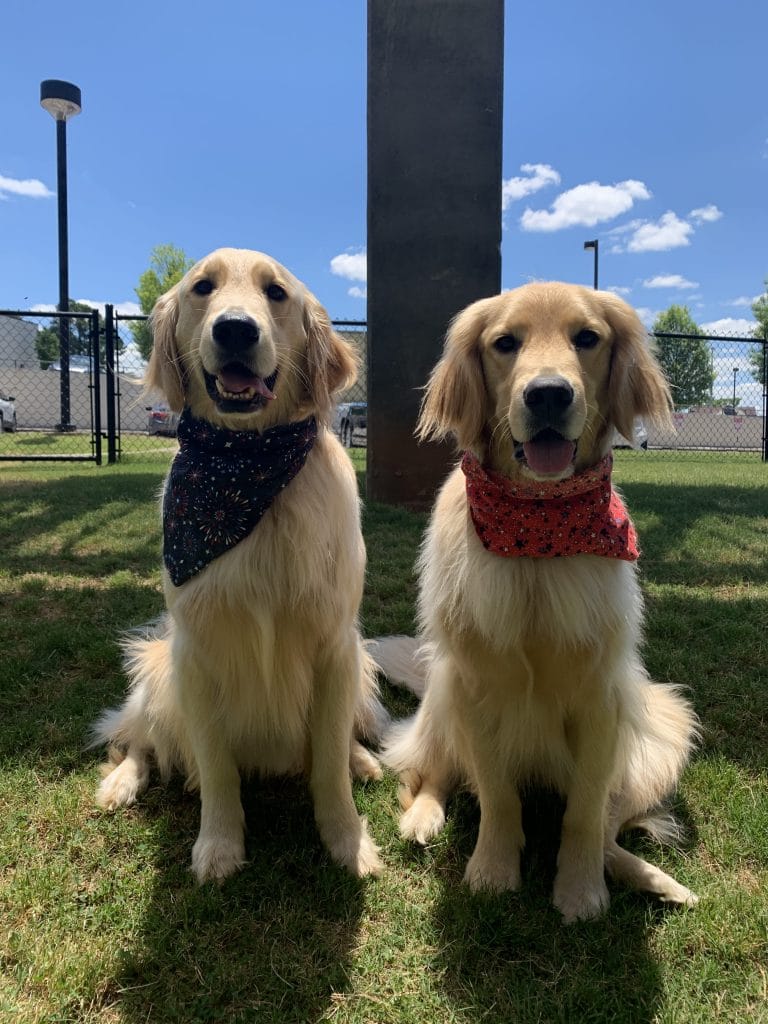 Asteroid (left) and Orbit work as facility dogs in the Canines for Coping program at Huntsville Hospital for Women & Children in Huntsville, Alabama. Photo by Stefani Williams

Four-year-old Asteroid and her brother Orbit are facility dogs in the Canines for Coping Program at the Huntsville Hospital for Women & Children in Huntsville, Alabama. (It’s fitting that the dogs have outer space names since Huntsville is nicknamed Rocket City because of its history with NASA.) Williams, a Certified Child Life Specialist at the hospital, coordinates the program.

Unlike therapy dogs, who are pets handled by volunteers, facility dogs are specially trained and their handlers are professionals. Asteroid and Orbit were trained by the service dog nonprofit Canine Assistants in Alpharetta, Georgia.

Because of their specialized training, Asteroid and Orbit can visit children—from infants to teens—in the intensive care units, or lie in bed next to patients during medical procedures like blood draws or IV insertions. Kids can pet the dogs or feed them treats to redirect their attention and reduce anxiety.

They support patients with a range of medical issues, including cancer, special needs and psychiatric issues (which have been on the rise during the pandemic). Even if the dogs aren’t in the room, they can still help, according to Williams.

“We have taken photos of our dogs—I’m using air quotes here—‘going through’ different procedures. We’ve mocked up an IV start on Asteroid and taken photos of that process, and photos of her jumping up on our MRI table and being sedated for an MRI. And then we use those photos to show children what they’ll experience,” she said.

The facility dogs also help families cope with stress. Parents aren’t allowed in the operating room with their kids, so when it’s time to separate, it can be upsetting for both parents and children.

“But when they get to take Asteroid for a walk and that’s how they leave their parent, it’s much more peaceful and much more joyful,” Williams said. “That’s an easier image for parents to sit with for hours, while they’re waiting for their child to return from surgery–rather than this image of their child being taken away from them and crying.” 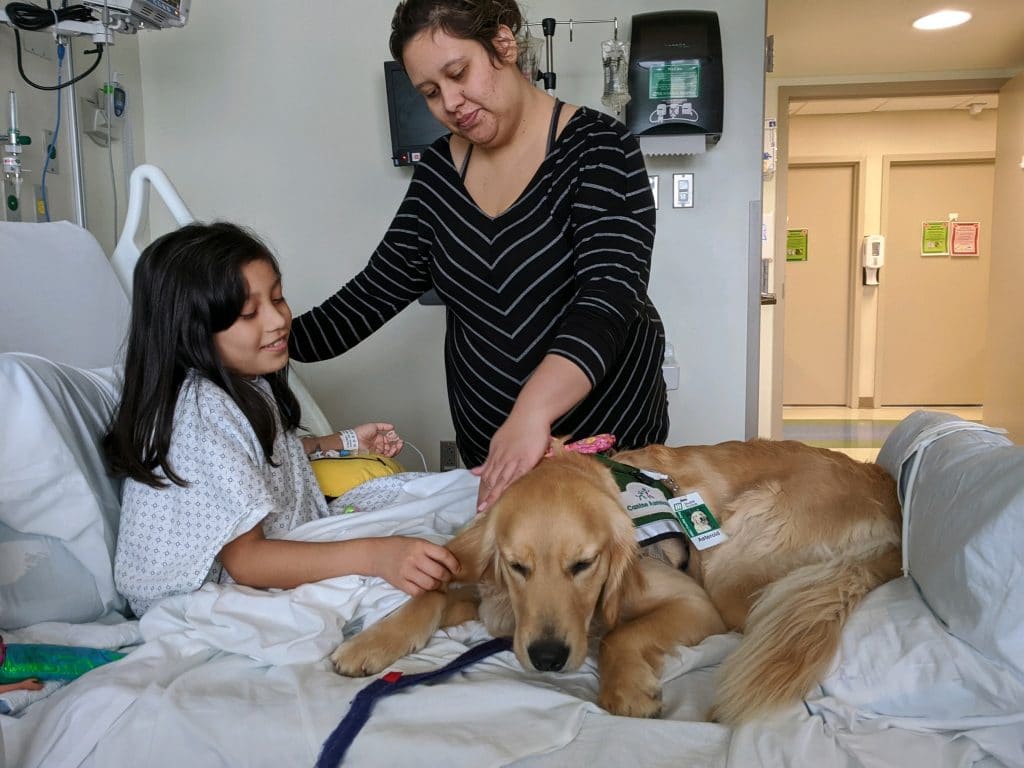 Asteroid offers stress relief to both children and their parents. Photo by Brittany Ellisor

There for the Hardest Times

The dogs also play a crucial role after surgery. That’s when moving and walking are important, but kids are scared to move because of their pain.

“We bring the dogs in and we play fetch, or we go for a walk in the hallway with the dogs,” she said. “Or they even just sit up in bed and reach to pet the dog. That type of movement helps recovery time and so that’s been really helpful.”

Asteroid and Orbit can also support families, including parents, siblings, and other loved ones, during the deeply difficult times when a child is passing away.

“There’s something nonverbal that happens between a dog and people during heavy moments like that,” Williams said. “That has been really incredible.”

All in a Day’s Work

Throughout their 40-hour work week, Asteroid and Orbit take breaks to stay energized. They’ll goof around outside, play puzzle games in the office, or nap. (When they’re not on the clock, the dogs live with their respective handlers.)

Like most siblings, the dogs have distinct personalities. Asteroid is the “spunky diva” who loves being the center of attention. In fact, her signature move is “the flop,” where she flops onto her back for belly rubs.

She’s particularly good with children on the autism spectrum, gently disrupting meltdowns by nudging their hands until they pet her.

Orbit, whose handler is Victoria Snell, is the “cuddle bug” whose strong suit is helping children with anxiety or who are in pain.

“He will get under the covers if they want him to. He will just curl right in,” Williams said. “He’s a great snuggler and kids love to just pet him as a way to help with pain management.” 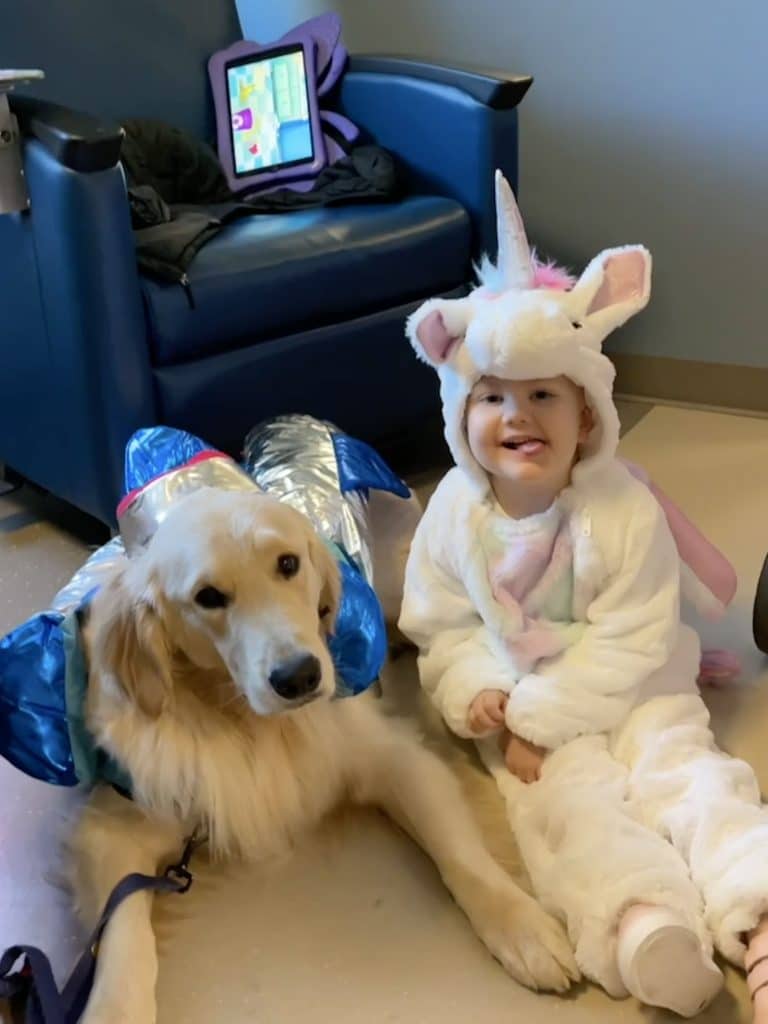 Both dogs seem to intuitively know when someone needs the most help. They might head straight to a parent who is struggling, or stop in the hallway to insist on interaction with a specific member of the staff.

“We’ll get a message later saying, ‘I know you don’t know why Asteroid or Orbit did that earlier, but I’ve had a death in my family recently.’ Or ‘I had bad news about a friend last week. I think that they could tell that I needed it,’” said Williams. “We see their intuition really benefiting our staff as well.”

Through the Canines for Coping program, the dogs have visited over 1,700 patients and their families, and boosted morale for over 7,000 members of the hospital staff.

The two Golden Retrievers are such valued employees that even though they can’t drive, they have reserved parking spaces at the hospital, according to Sarah Savage-Jones, president of Huntsville Hospital Foundation.

“The program has exponentially been a success,” she told The Dog People.

Asteroid started the pilot program in 2019 with funding from the hospital system’s robust employee giving program, she said. After representatives from the nonprofit PetSmart Charities toured the hospital and saw Asteroid working her magic, the organization helped fund a second dog; Orbit joined in 2020.

Recently, PetSmart Charities awarded the hospital a $186,000 grant that will fund the Canines for Coping program through 2023.

There is no cost for the service to patients and their families. 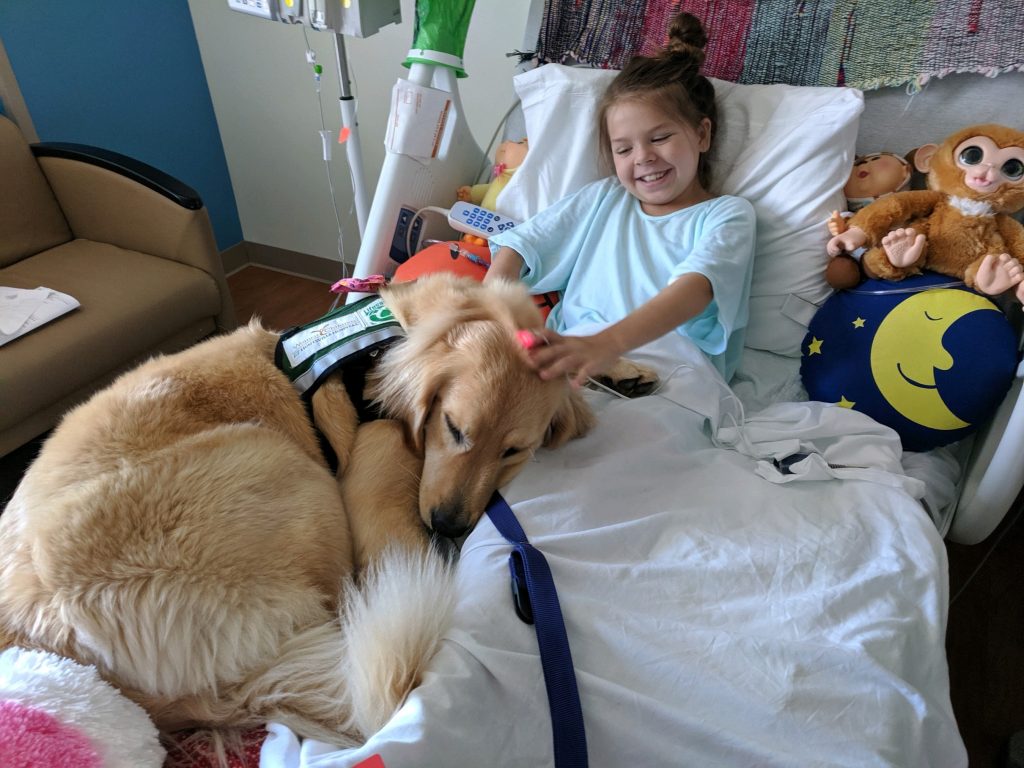 Naturally, Savage-Jones is grateful for the support. She’s witnessed the powerful effect of the dogs with hospital patients, including when her own daughter needed surgery.

Though it was rare to need to restrain a child objecting to an IV or other procedures, now the team never needs to use restraints.

“The dogs take on those fears and just calm us,” she said. “It’s just been incredible: the reduced pain levels, the reduced stress, and better reactions that come from our children because of these dogs.”

She noted that the hospital obtains parental permission prior to visits to ensure the patients don’t have allergies or fears of dogs. Additionally, Asteroid and Orbit adhere to the hospital’s cleanliness and safety requirements.

“I think that as we move forward in healthcare, this is a whole new area that can really make a difference, not only with children. In the hospital, it is a transformational experience for that patient,” she said. “Even as a dog owner my whole life, I’d never seen anything like it until I saw it in action. It’s quite remarkable.” 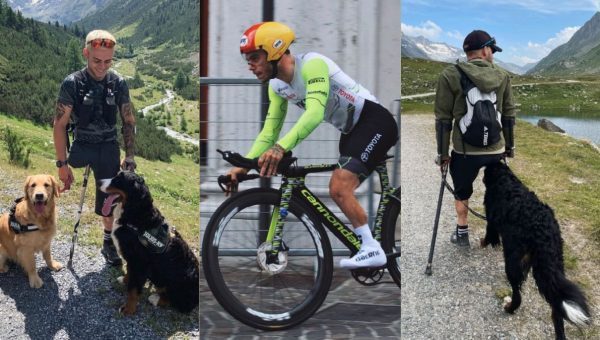