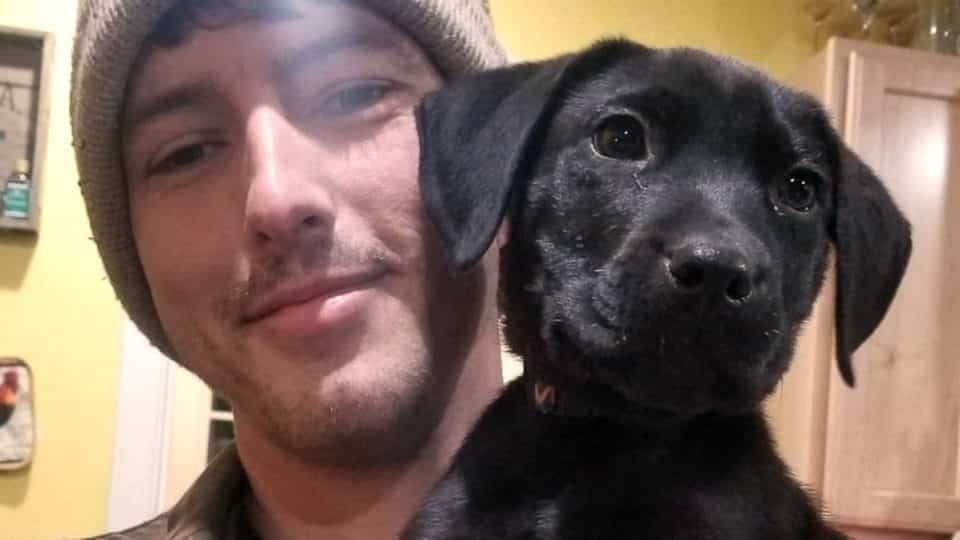 When Nick Abbott saw a Facebook post about a deaf puppy in need of a special adopter, he knew he had to meet little Emerson the Labrador retriever.

Like the puppy, Nick was born deaf. And he’d never met a deaf dog before. But Nick had a feeling they would click instantly, and boy was he was right.

Check out Nick and Emerson on the news

“He came straight to me at the door and sat right away at my feet and stayed there so you can tell he kind of picked me. And I knew right then and there that we would get along and understand each other pretty good.” he told local news station WABI.

Emerson with his littermates

Emerson and his littermates Nash and Palmer were pulled from a high kill shelter in Florida by NFR Maine. Emerson’s brothers quickly found homes but he wasn’t quite so lucky. In addition to his deafness, Emerson came down with Parvo, and was very ill for some time. Thankfully he pulled through so he could meet his soul mate Nick.

Nick and Emerson were instantly inseperable. Nick’s mom Richelle says that Emerson always manages to find a way to be touching Nick at all times.

Emerson has been learning sign language obedience commands and is a quick student. The pair have mastered sit, stay, down, and paw so far. And it looks like the sky is the limit! Never underestimate the power of a determined person and a devoted dog to challenge all expectations.

"Hello everyone, this is Nick and Emerson! Thank you everyone for checking us out on Facebook and Instagram. We are looking forward to sharing more videos and pictures of our life together with you. Thank you!" What a crazy turn of events! I had absolutely no idea how many people would want to follow mine and Emerson's story. Because of that we will try our best to include you all in on our adventures ? – today's adventure was an easy hike up Beech Hill . . . . . #nickandemerson #thatsahappydog #mainedogs #adventurepuppy #hikingwithdogs #dogsonadventures #mansbestfriend #doggo #gopro #ruffwear #outdoorpups #deafdogsrock #bestfriends #silentpuppylove #adoptdontshop #instapet #dogs #labsofinstagram #blacklabpuppy