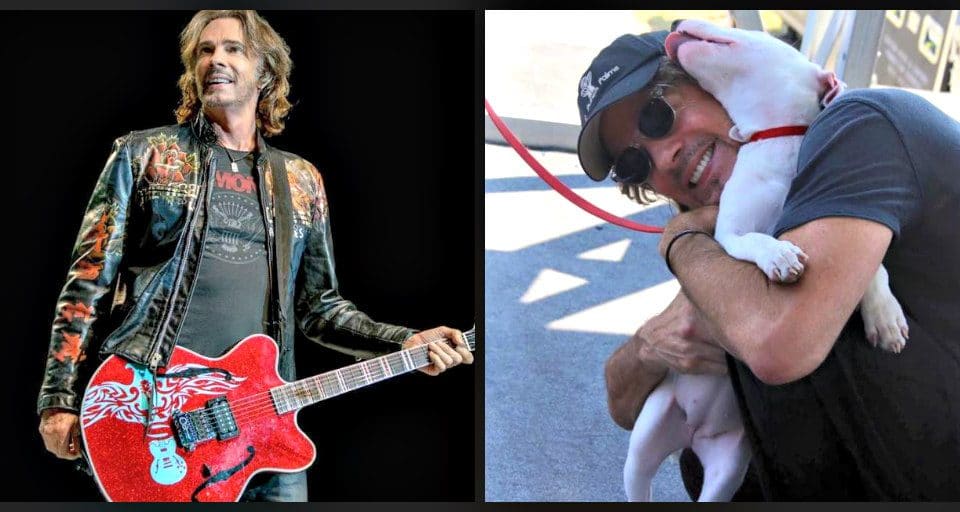 If you think of Rick Springfield, many things come to mind including rock star, musician, singer, songwriter, actor, author, and heartthrob. But when Rick Springfield describes himself, it’s in two simple words: dog advocate.

“We all loved dogs,” Springfield said about growing up in his family. “My dad started it and he was crazy about them. As my Mum was getting older she wanted dogs but didn’t want them to outlive her so she’d always pick an older dog from the shelters. She went through about six of them until one finally outlived her.”

I can’t guarantee it’ll make you jump higher, but the shirt I’m wearing is available in the official store! Proceeds go…

During summer holiday when Springfield was 7 in his native Australia, every morning was magic. That’s because he got up before his parents to round up all the neighborhood dogs, of which there were about 20.

“We’d all run down to the quarry behind the houses and play there for a while,” Springfield said. “Then I’d take them all back to their separate houses. It’s one of my best memories of childhood.”

My Mummy in Australia has passed away. Dec 21st, 2016. She died while bringing in her washing from the clothes line. Sat…

But one of his worst memories of childhood also had to do with a dog. Springfield’s father was an Australian Army officer who was posted to England in an exchange program that would last three years. Unfortunately, the family was not allowed to take Elvis, who was Springfield’s very own first dog. Springfield’s friend and his family agreed to take the dog in.

The day he left Elvis, the family was not home, so Springfield had to tie up the dog outside the family’s house. While Springfield walked down the driveway back to his father’s car, “Elvis began howling and it broke me,” he said. “It still hurts to think about it.”

Watch as he tells Steve Harvey the story about how it “left this giant hole in me that I’ve tried to fill with every other dog in the universe”:

For Springfield, those three years without a dog were exceptionally long. “The longest I’ve ever been without the company of a dog,” he said.

Dogs and Music; Music and Dogs

Later on, in his early teens, Springfield took up guitar and played in various bands. He eventually ventured on a solo career and moved to the U.S. in 1971.

Springfield is a Grammy winner who has sold 25 million albums, and has had 17 U.S. top 40 hits that include “Jessie’s Girl,” “I’ve Done Everything for You,” and “Don’t Talk to Strangers.”

His acting credits include starring with Meryl Streep in the movie, “Ricki and the Flash,” the HBO drama “True Detective,” and “American Horror Story,” among many others. He released his latest album, “Orchestrating My Life” in 2019. He continues to rock at his concerts while wowing audiences as well as producing and writing music.

Although he continues to make music every day, his love of dogs has been a constant throughout his life. He even included one of those dogs on the cover of his album “Working Class Dog,” released in 1981 by RCA Records. This fourth album for Springfield went platinum.

That dog, who was named Lethal Ron, was also featured on a subsequent cover for his album “Success Hasn’t Spoiled Me Yet.”

Lethal Ron wasn’t just any dog (and he had many nicknames). He was rescued from the streets by one of Springfield’s ex-girlfriends. She put the dog in the garage of the house they were renting and would soon vacate since they couldn’t afford it. “I opened the garage door when I got home and he came running at me sideways,” Springfield said. “His tail was wagging so hard. Love at first sight.”

On the Road with Dogs

It seems no matter where Springfield goes, dogs follow him everywhere. Or he follows them.

“On the road we will often go to a shelter if we have time and play with the dogs and give a donation plus publicize the place locally and at the gig,” he said.

Springfield even got to meet Caitlyn the dog who in May 2015 was rescued after she was found wandering the streets of Charleston, S.C., bound with electrical tape around her muzzle. Springfield was contacted before playing a November 2015 concert in Charleston to see if he’d like to meet Caitlyn.

Hanging backstage the other night with one of my favorite species. Caitlyn was rescued from an inhumane loser who taped…

He jumped at the chance to meet the dog whose story became one of hope around the world.

“I remember her,” he said. “She was so sweet. If it had happened to a human, they would have had mental scars for the rest of their lives and probably been very anti social. Caitlyn forgave right away and couldn’t wait to leap all over you and tell you how awesome you are.”

And when it comes to animal cruelty, Springfield speaks up and has zero tolerance for animal abusers, making no bones about it (no pun intended).

Please make a homeless pet’s dreams come true by singing the praises of shelter pets! Join me and post your adopted pets…

“I don’t really know how you address something that is so obvious other than to take action if you see it or hear of abuse,” Springfield said. “It makes me sick. And, if I go to hell when I die, I want to be in charge of all the bastards who abused animals.”

If it’s dogs, Springfield has a hard time saying no. It’s why you may see him in important dog rescue shows such as the Hallmark Channel’s “2018 American Rescue Dog Show” where he judged Best in Rescue. Prior to the show, he was featured in the channel’s Adoption Ever After campaign PSA:

“There were a bunch of rescues backstage and I held one on my lap throughout the whole show and he got adopted by a viewer,” Springfield said of his stint on the show.

He’s a featured celebrity for Remember Me Thursday, a movement that shines a light on orphaned shelter pets who need homes. Springfield is working to help raise money for organizations helping the burned and displaced animals from the Australian wildfires, including selling a special T-shirt on his merchandise page.

He and singer/songwriter Richard Marx did a streaming acoustic concert to help raise money for Wildlife Warriors. He also auctioned off some of his personal guitars through Heritage Auctions with proceeds going to the organizations.

Springfield supports actress and animal advocate Linda Blair and her Linda Blair Worldheart Foundation. “She has been a longtime friend and does great work.”

Some of my fans have joined in to help raise much needed funds for The Linda Blair WorldHeart Foundation dog rescue! If you want join us helping our furry friends, visit: https://happybirthdayrick.com/

Additionally, he donates when he sees anything in the news about animals in need. “And, we LOVE going to shelters,” he said.

These days, Springfield is still getting over the loss of his dog and “main man” Gomer, so he is not yet ready to adopt another dog. He and his wife have Bindi, a Norwich Terrier, a breed his wife fell in love with.

Awesome photo of my girl Bindi being forced to listen to me read my first bestselling novel. The look on her face says it all. Xo Rick

But when he’s ready to bring in a dog of his own, he will make sure it’s a rescue dog.

“The rescues know they have been rescued and you won’t find a more thankful and loving dog than the one whose life you just changed forever,” he said.

Got to meet "Lotto" from the Fort Pierce Police Department K9 Unit after soundcheck on Friday. What an amazing animal!!!…

You can donate to Linda Blair Worldheart Foundation here. Click here if you’d like to purchase a T-shirt to help the animals devastated by the Australian wildfires. For more Rick Springfield Official Merchandise, click here.