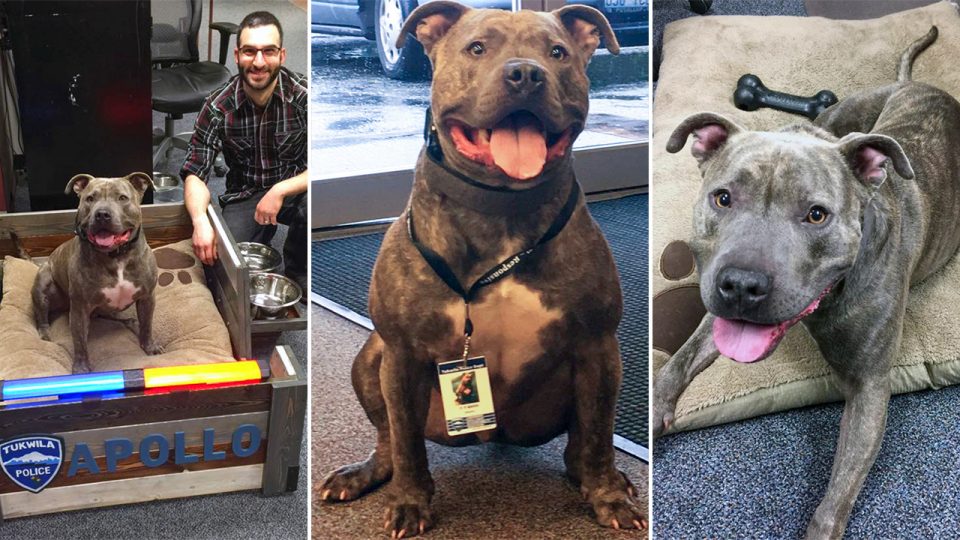 When Apollo the pit bull became a successful canine cop in the Seattle suburb of Tukwila, WA, his story quickly went viral. A year later, and he’s still rocking his position as a K-9 narcotics officer. Read on for more about this incredible dog—including how he’s doing today.

The dog that no one wanted

Apollo’s adventure started with abandonment. He was turned into the local shelter, where he stayed for over six months even as other dogs were placed with families. The shelter eventually decided that he might be too rambunctious for adoption, despite their best efforts.

Before Apollo’s time ran out, the quick-thinking and concerned shelter employees contacted a K-9 police trainer. They believed that Apollo—kind, bright, and spirited—would be a good fit for working with law enforcement. And they were right! The trainer ran Apollo through some drills, saw his potential, and agreed to take him, moving him from the shelter to the kennels at the Department of Corrections.

But though Apollo was accepted by the trainer, it was hard to convince any police department to choose him over the other K9 options. He spent twelve months being passed over until the Tukwila Police Department learned about Apollo.

The trainer was convinced that Apollo could finish first in K-9 narcotics school if someone would just give him a chance. Luckily, the department listened and decided to give Apollo a job and a loving home. Apollo did finish first in the narcotics training program and has shown himself to be a hardworking and joyful addition to the force.

Apollo has a new ballistic vest thanks to a company in Whatcom County. He will also be featured on a brief A&E segment in the near future. bit.ly/2C20ktL #K9Apollo #tukwilapd #tukwilapolice

Apollo’s first year on the job

It seems that Apollo’s first year has been going quite well! He was praised for helping to seize $355,000 in cash and 30 lbs. of narcotics by mid-2017. He’s also credited with improving the reputation of pit bulls, showing the public that a pit bull can make a wonderful pet with the right amount of training and compassion.

His playful, friendly nature has made him an office favorite, and he’s earned a reputation as the “office social butterfly” – greeting many of his favorite people with big, sloppy kisses. Apollo (and his fellow K9 officer, Ace) are so beloved that fans even donated custom beds for them.

Where is he now?

Apollo recently helped give out Employee Awards for the City of Tukwila, where he stole the show (as usual!) Check out the hilarious outtakes, which the city posted online.

Besides representing his city, Apollo is active on the job. He works with a plainclothes narcotics detective, so the police department can’t give out specifics on his daily life. We can only imagine that he’s out there working (and sniffing) hard.

If you want to meet Apollo, he often comes to Tukwila’s “Coffee with a Cop” community outreach events at the Southcenter Mall. He’s also supposed to make an appearance at the city’s upcoming “Touch A Truck” event.

Be sure to visit the Facebook page for the Tukwila Police Department where you can find more info (plus some pretty cute pictures of their favorite four-legged friend).