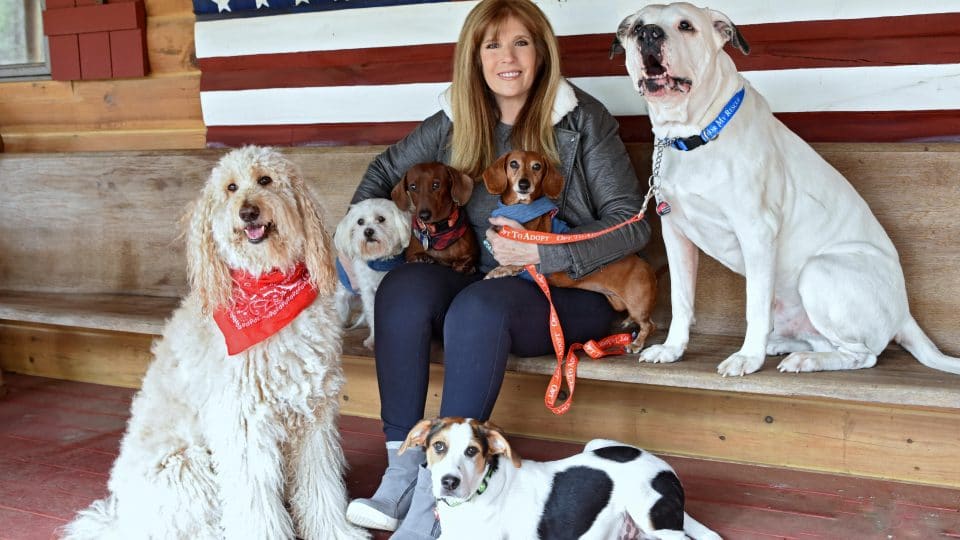 Jill Rappaport and her rescue dogs. Photo by Kristin Gray

Whenever someone says Jill Rappaport is the “face of senior dogs,” she takes it as a compliment.

“I’m really thrilled and honored to be the face and voice of the voiceless,” she said. “I’m all about the underdogs in the rescue world.”

The network journalist, award-winning animal advocate, and best-selling author has devoted her career and personal life to shining a light on dogs who have the hardest time getting adopted, including seniors, pit bulls, and those with special needs.

It all started in 2006 after her beloved German Shepherd, Jack, had a leg amputated during his battle with bone cancer. Jack became the “Ambassadog” for hope for animal cancer after she wrote the book, Jack & Jill: The Miracle Dog with a Happy Tail to Tell,  and featured his story on the Today show.

“I had been the Today show’s entertainment reporter for the previous 16 years, and I always like to say, ‘I went from the red carpet to the wee-wee pad and I couldn’t be happier,’” she quipped. “When I did Jack’s story, I got the most unbelievable reaction from all over the world. I went to my boss and said, ‘Stars don’t need my help. Animals do.’”

So she helped put dog adoption on the map by creating and hosting “Bow to Wow” segments about shelter dogs for the Today show–which had a remarkable 100% adoption record over its 7 ½-year run–as well as the NBC special “Best in Shelter with Jill Rappaport.” 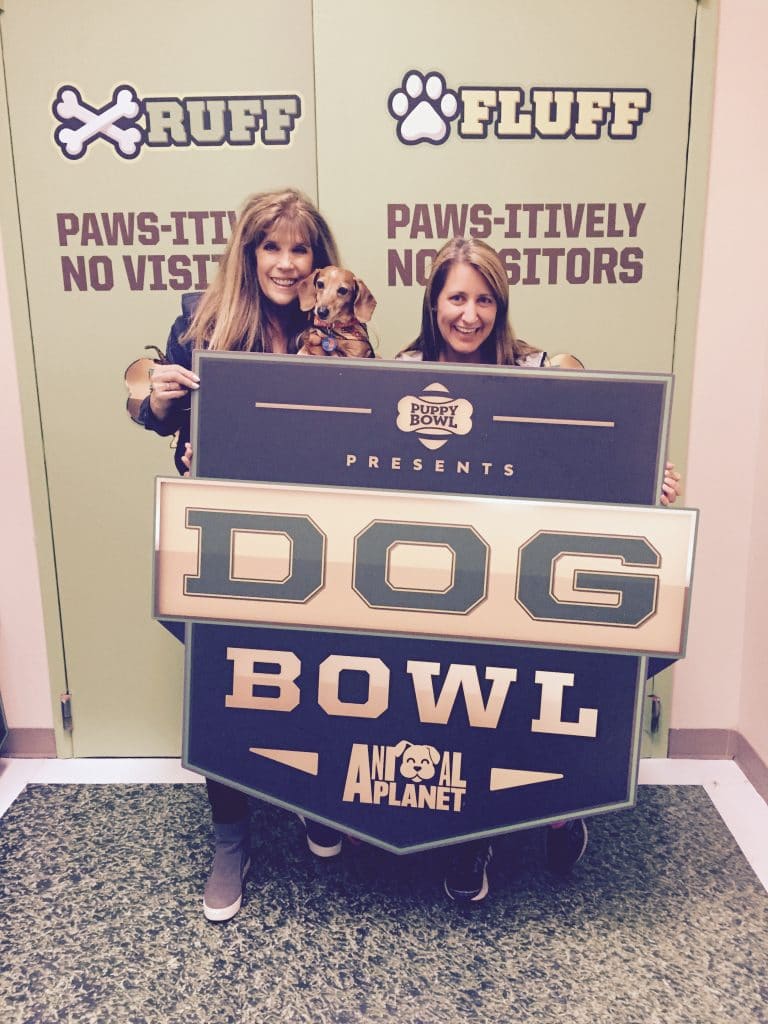 She hosted segments on The View called “Rappaport to the Rescue” to showcase adoptable dogs and hosts the “Pup Close and Personal” segments on Animal Planet’s Puppy Bowl.

To highlight senior dog adoptions, Rappaport became the creator, host, and consulting producer for Animal Planet’s “Dog Bowl.” She also serves on the advisory board of The Grey Muzzle Organization, a nonprofit that awards grants to animal shelters, rescue organizations, and other groups that promote senior dog adoptions.

“I am here to tell you that often when you take in an older animal, they end up thriving,” she said. “They’d rather sleep on the couch than eat the couch, and they let you know they know they’ve been saved on the brink of death. They’re so grateful for it, and I think that explains why they end up living longer, because all our animals want is unconditional love and to be warm and fed and loved and cared for and out of pain. When you give them that chance, they thrive.”

Her most recent project is a podcast (or as she calls it, “petcast”) called Rappaport to the Rescue on Pet Life Radio, which she launched during the coronavirus pandemic. The weekly show regularly features dog trainer Bill Berloni, who rescues animals and trains them to be Broadway and TV stars, and has already drawn guests like Meredith Vieira, Isaac Mizrahi, Isabella Rossellini, Kristen Bell, Sutton Foster, Joel Grey, and Al Roker.

“Each one is just so passionate about helping animals in rescue,” she said. “It’s just been the most fun ever because I don’t use notes. There’s no teleprompter. We just talk like two friends hanging out in a local restaurant or in the living room.” 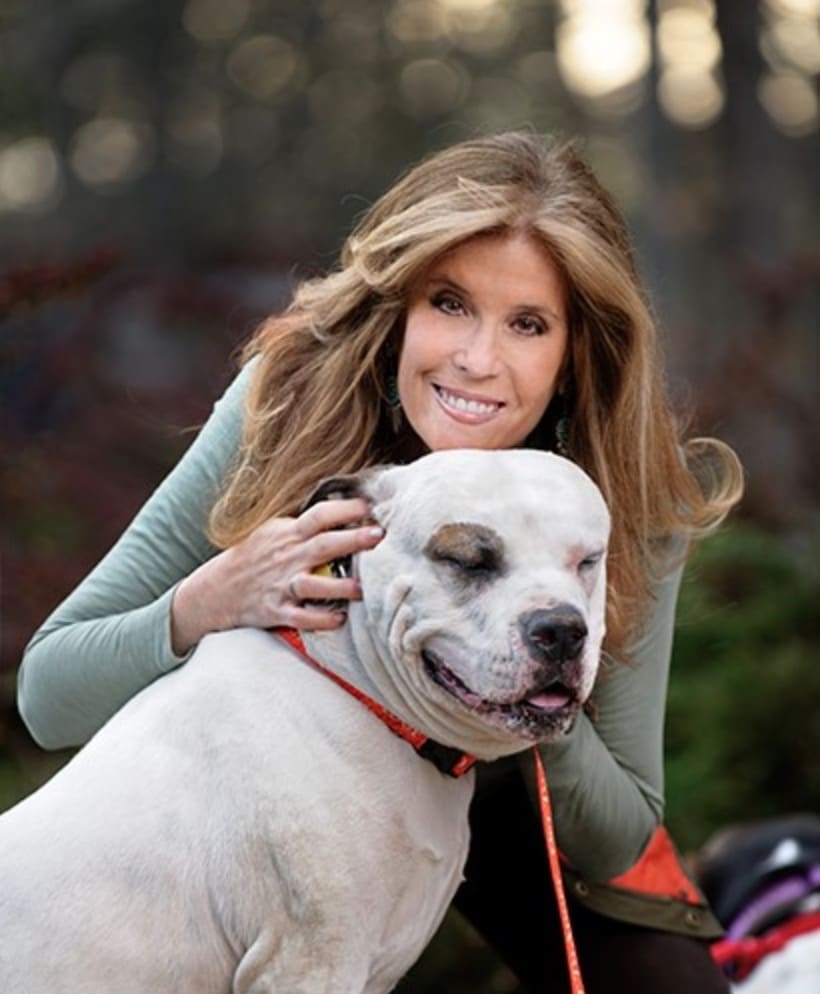 Rappaport is currently mom to five rescue dogs after the death of her beloved Dachshund, Ruby, earlier this year. Along with five horses, they’re all are living the good life on her New York farm after rough starts.

Petey, a 15-year-old Pit Bull/Bull Dog mix, was used as a bait dog in a dog fighting ring. Stanley, a Standard Poodle, and Scout, a Coonhound, were both abandoned in ditches. Oscar Meyer, a Dachshund, was dumped at a shelter when he was around 8 years old because the owners were moving. CJ, a Havanese, is the oldest of the bunch at 18. She’s deaf now, but her eyesight is still strong and she loves running around in the yard.

“These animals are children who never grow up,” she said. “When you take in an animal, you’re their caretaker for the rest of their life. For me, it’s a gift, a joy, and an honor.”

Rappaport pours her passion for pets into buying products they deserve–and sometimes even creating them! She’s delighted to tell Rover about her favorites and emphasizes the products she’s recommending here have been “life changing” for her dogs, and could be for ours, too.

“I’m all about authenticity,” she said. “I would never even utter a product name unless I was using it every single day for those pets for a very long period of time so that I could honestly say, ‘This product has made my life and their life so much better.’”

1. A Maze or Slow Feeder Bowl 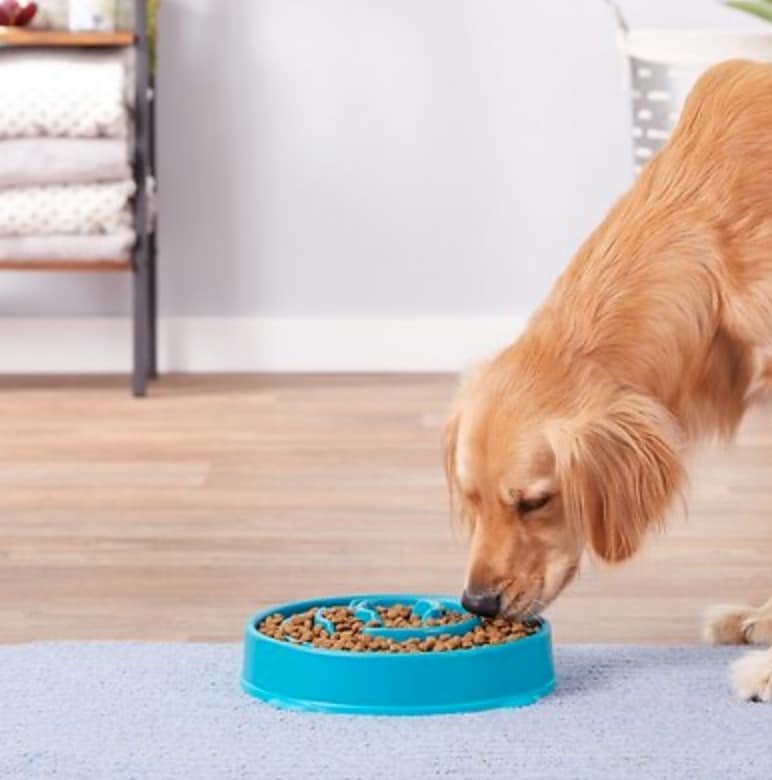 When Buckaroo, Rappaport’s late Labrador Retriever, used to wolf down his food, she bought a dog bowl that looks like a maze to slow down his digestion process and prevent choking and the deadly bloat, a.k.a. stomach twist. She was so impressed that now all her dogs use them–and she credits the bowls with adding years to her dogs’ lives.

“If you have a dog that is a fast eater–a chow hound–you must get this bowl,” she advised. “It takes them five times longer to eat their meal because they have to go in and around all the crevices to get the food.”

Rappaport does all she can to prevent arthritis in her pets since it’s a common cause of euthanasia, so she’s been giving her pets the joint supplement Cosequin for 20 years–no matter their age.

“The minute I rescue them, the second they come into my house, they go on Cosequin,” she said. “I have to tell you, when Jack was diagnosed with bone cancer, they had to do a body scan. They said, ‘We’ve never seen a German Shepherd without a trace of arthritis. How is this possible?’”

Of course, she noted, and we agree, that you should always check with your veterinarian before giving any ingestible to your pet. 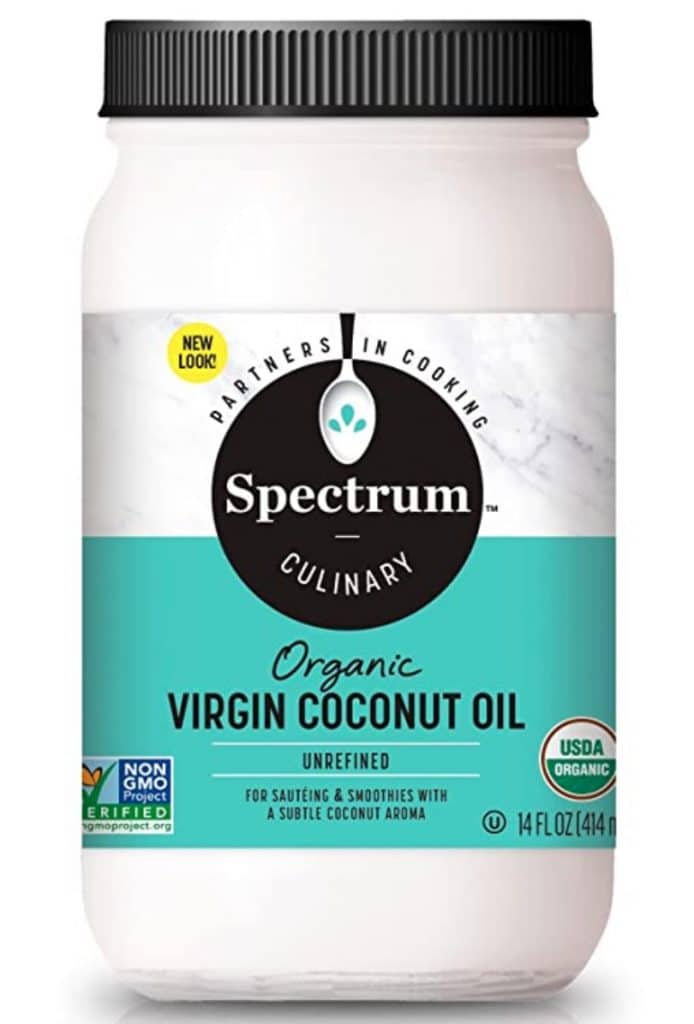 For years, Rappaport’s American Bulldog mix, Petey, had a brown, crusty nose. Her veterinarian suggested rubbing coconut oil onto his nose twice a day–it smells delicious and is safe for dogs to lick. She rubs it with her finger and lets the oil melt into Petey’s nose.

“He all of a sudden had a black, shiny nose again,” she recalled. “This has changed my dog’s nose.” 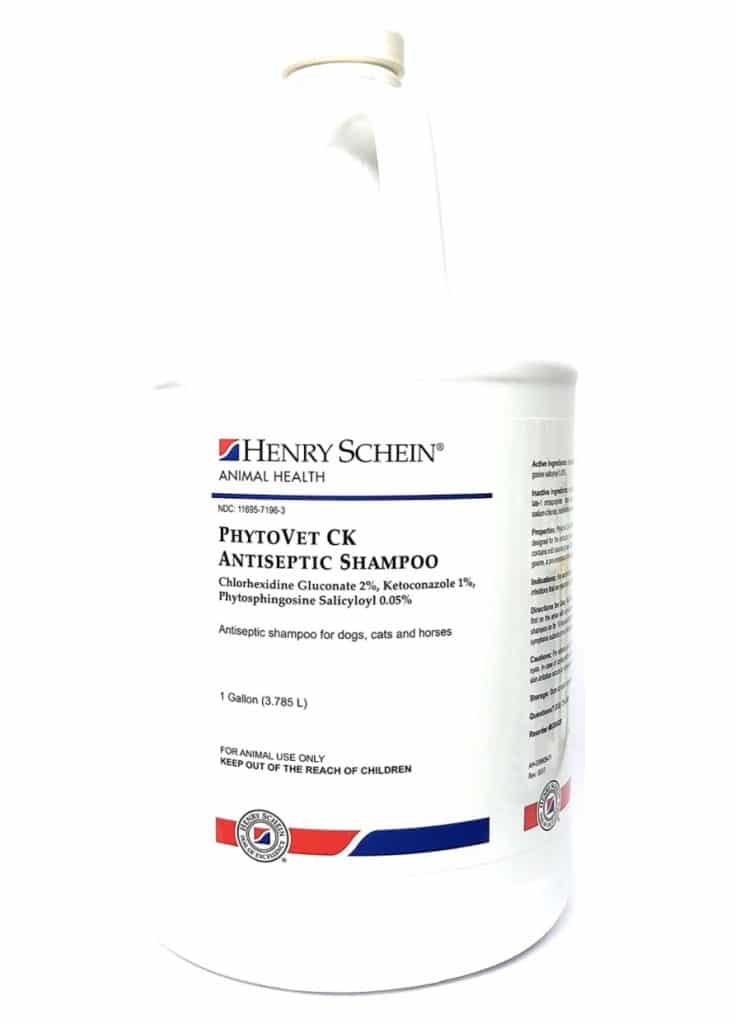 Some of Rappaport’s dogs have endured itchy skin conditions due to allergies. Petey’s bumps would get so bad that they’d ooze and bleed.

But after just one bath with this shampoo, she could see their skin calm down–the bumps would get flatter and the oozing would stop. She used it every day for two weeks and the conditions completely cleared. Now she shampoos them once a month for maintenance. 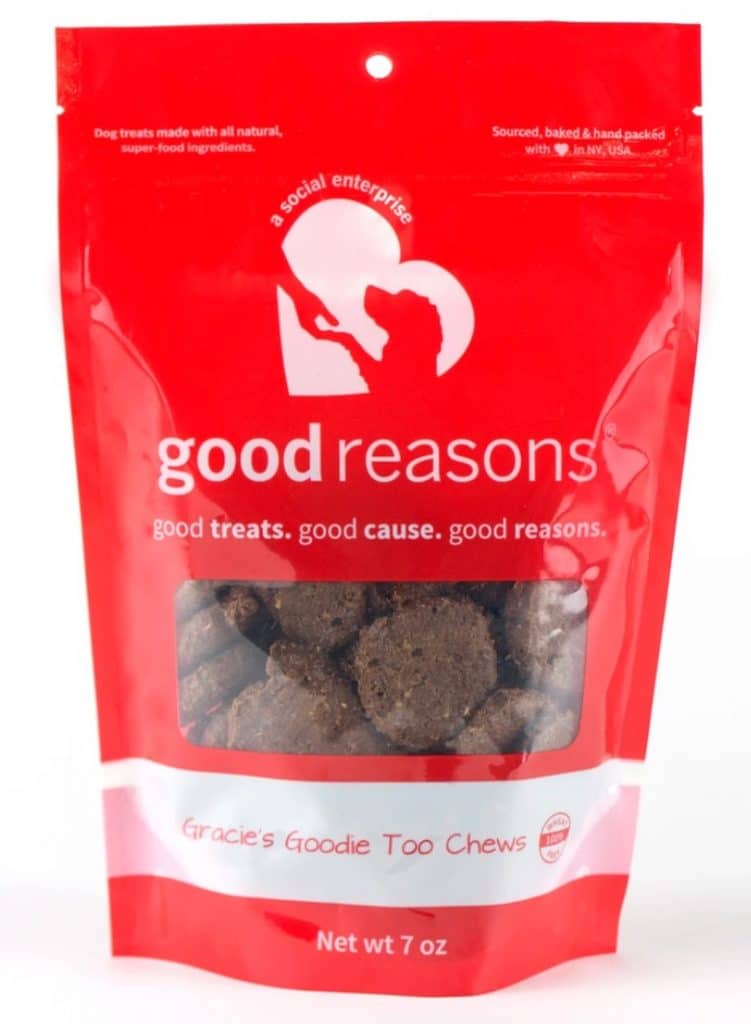 The treats are made with all-natural ingredients—“Dogs flip out over them,” according to Rappaport—and the company is a nonprofit that employs people with disabilities. She’s worked with Good Reasons in the past and highly recommends them. 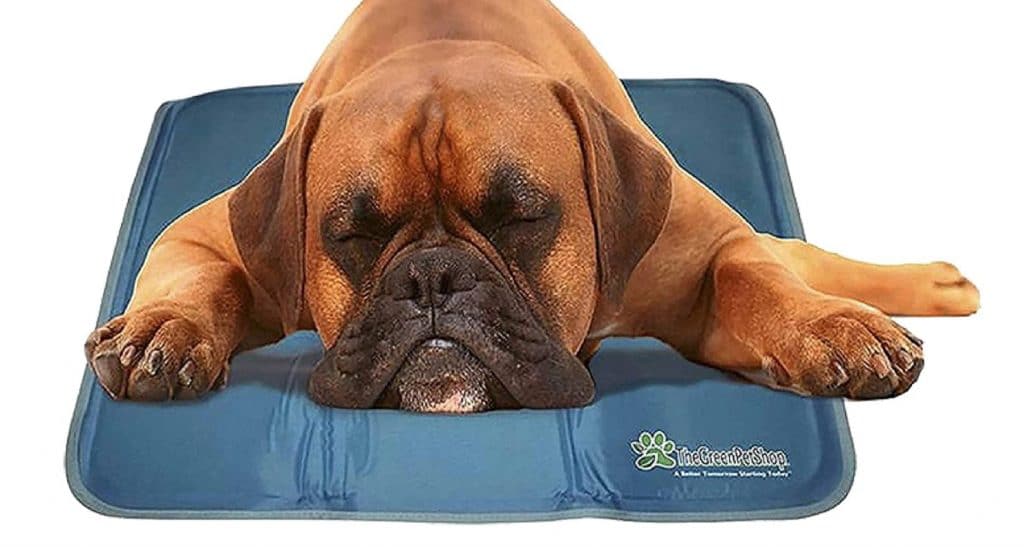 Dogs can overheat on hot days, even in the shade. So when hanging out with her dogs in the summer, Rappaport’s pets lounge on padded mats that help keep them cool. The Cool Pet Pad doesn’t require refrigeration, recharges automatically, and is pressure activated and nontoxic.

She stressed that she never leaves her pets unattended on hot days—no one should! 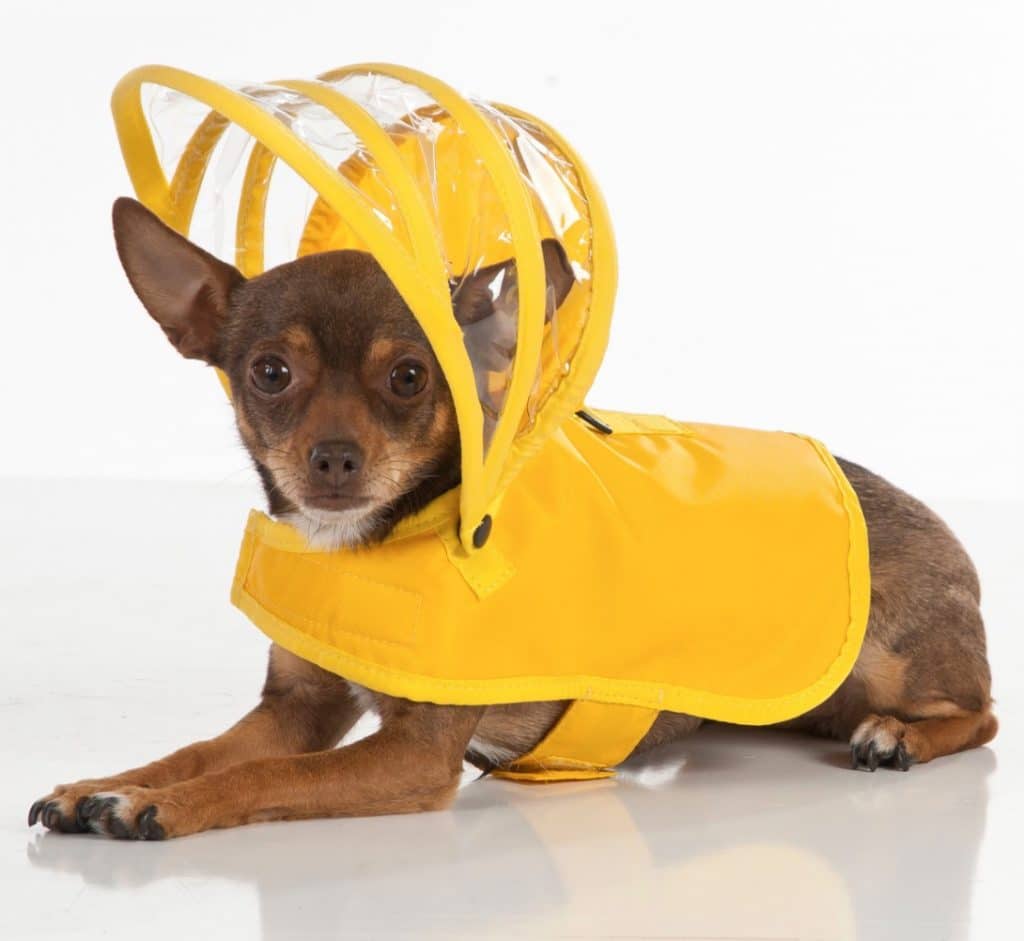 All of Rappaport’s Dachshunds stay dry on rainy walks in a yellow slicker with a face hood by Push Pushi.

“It’s the funniest thing, and my Dachshunds love it because they hate rain.” 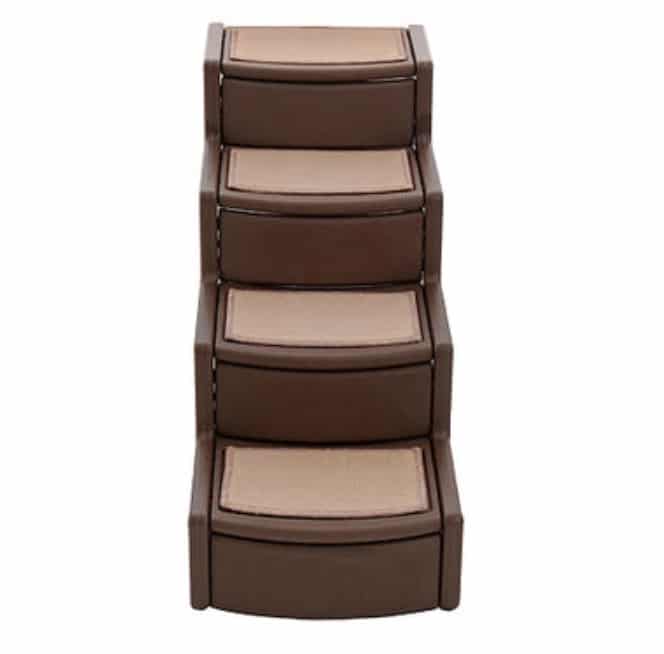 In a home with so many senior dogs, it’s no surprise that Rappaport keeps doggie stairs to help her pets climb onto the bed or couch.

“They can screw up their knees and their back if they jump off. My smart dogs use the stairs without me even having to tell them now. They know that it’s helping them, and it’s easier for them,” she said. 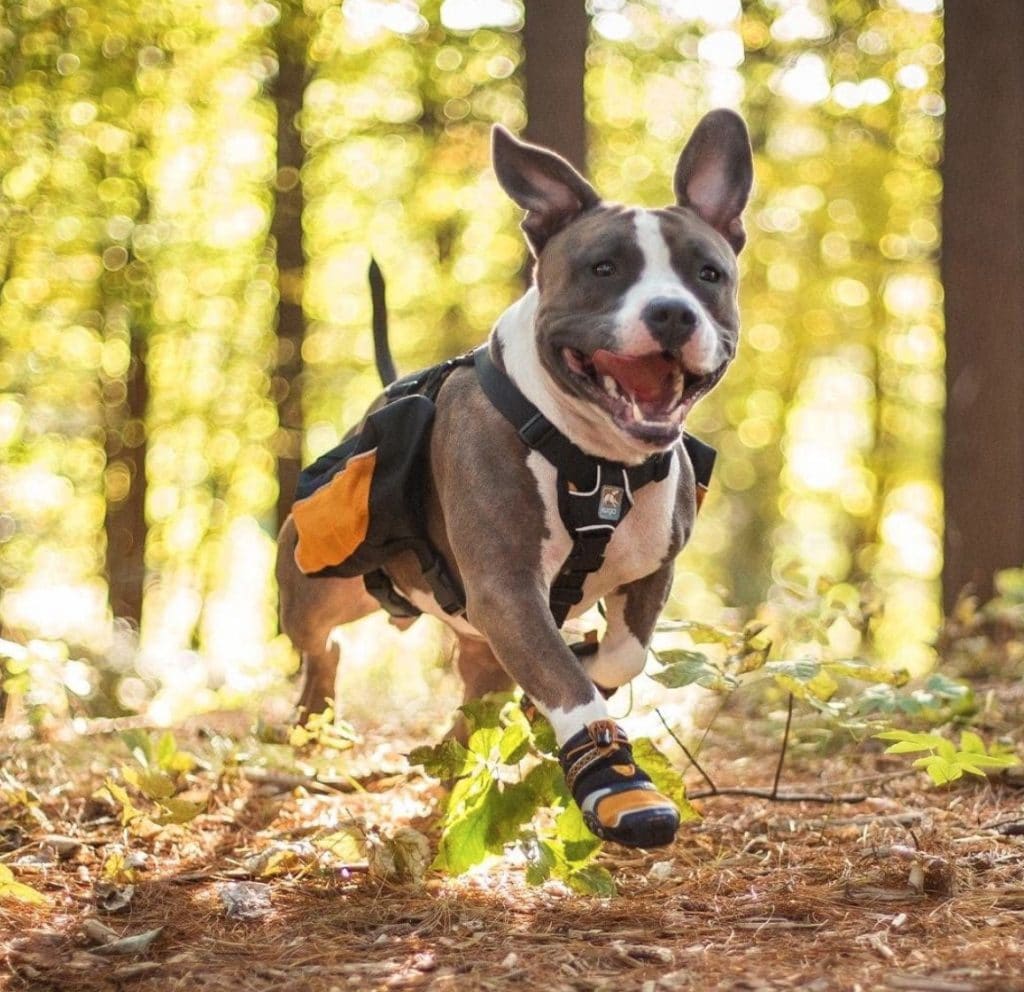 Rappaport strongly recommends dog booties for pet lovers who live in cities to help keep paws from burning on pavement, or from stepping on glass or sharp rocks. Also, streets can be dirty, and then dogs track things into our homes and beds.

One caveat: “Your dog has to get used to them. They’re going to start walking like they’re stepping in bubble gum, picking their feet up. It’s so funny when you first put them on.” Try creating positive associations by offering treats and praise.

Rappaport is proud that her affordable, machine-washable, American-made line of dog leashes and collars sport slogans that promote rescue, like “Opt to Adopt” and “Pound Hound.” An upcoming line will feature LD lights with the theme “Shine a Light on Rescue.” She donates a portion of the proceeds to animal shelters, so it’s a win-win.

For more about Jill Rappaport and her work with rescue and senior dogs, visit greymuzzle.org or check out her petcast, Rappaport to the Rescue. 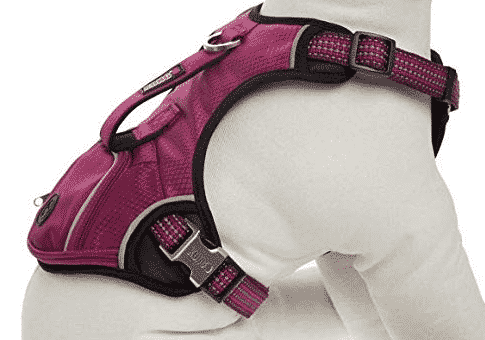